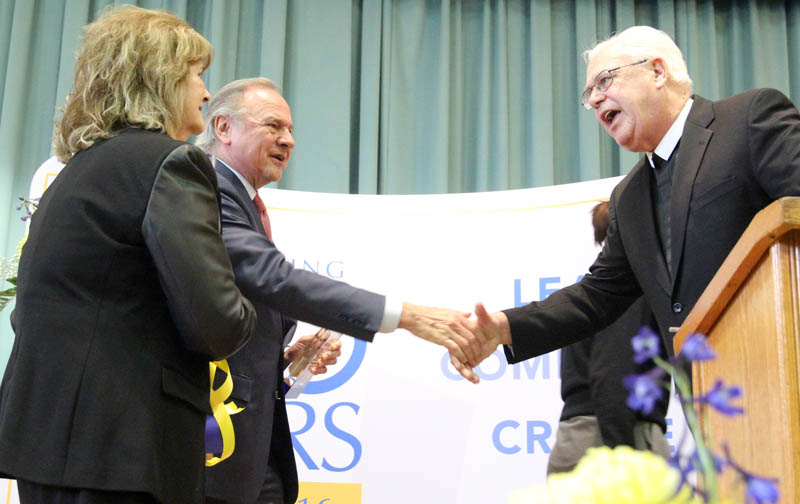 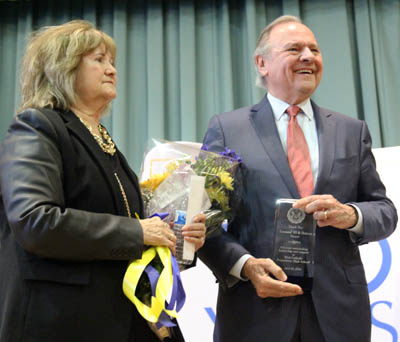 Threatened with closure just four years ago, Philadelphia’s West Catholic Preparatory High School is facing a brighter future thanks to a generous $5 million donation by Leonard Mazur, class of 1963, and his wife Helen.

The largest donation in the school’s history was formally announced at a Thursday, April 28 ceremony held at West Catholic.

In a statement Archbishop Charles Chaput praised the “overwhelming generosity” of the Mazurs.

“Their investment in the future of urban Catholic education is a remarkable demonstration of support for one of the most important ministries in our local church,” he said. “I’m deeply grateful to the Mazurs for this gift. It will greatly enhance the school’s ability to fulfill its mission.”

At the ceremony itself the archbishop noted it is unusual for a $5 million gift to be given to a high school. “We hear stories all the time of donations to colleges and universities,” he said.

Leonard Mazur, who went from West Catholic to Temple University, holds a master’s in business administration and has enjoyed a successful career with a number of companies mostly in the pharmaceutical field. He is currently vice chairman and founder of Akrimax Pharmaceuticals, a cardiovascular services company he created in 2008. 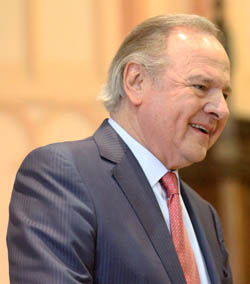 “All of you had doors opened for you and opened wide. Now it is up to you to walk through those doors and keep looking for other doors as you go through life.” — Leonard Mazur, West Catholic Class of ’63.

His personal story is remarkable. Born in postwar Germany of Ukrainian heritage, his family came to America in the late 1940’s when he was very young as refugees under the Displaced Persons Act. In the beginning they were living in Maryland with his father working as a chicken farmer.

Through the persuasion and assistance of a priest friend, they came to Philadelphia where his father found work in the construction field and ultimately purchased a home in St. Barnabas Parish in Southwest Philadelphia.

Upon graduation from West Catholic Leonard enrolled at Temple but midway through his first year a family crisis, his father being laid off, jeopardized his continuation in college.

Again, the kindness of others became a turning point. A local merchant for whom Mazur had worked part time during his high school years intervened. Without being asked, he offered to underwrite Mazur’s college expenses which he could pay back whenever he could.

It was these very real experiences — the welcome of his family to a new country and assistance along the way – that made him determined to help others with needs.

In addition to serving on the board of West Catholic Preparatory High School, he is board chairman at Manor College, and a member of the board of visitors for Temple University’s College of Liberal Arts. He also supports a number of causes in Ukraine, his ancestral country.

West Catholic holds a special place in his heart, especially the bond to the class of 1963, many of whose members were at the ceremony.

“I can’t begin to describe what West Catholic means to me,” he told the assembled students. “I didn’t leave behind the memory of friends and the wisdom and commitment of the teachers here.

“All of you had doors opened for you and opened wide. Now it is up to you to walk through those doors and keep looking for other doors as you go through life. I do hope someday some of you will be on this stage providing scholarships for other students of West Catholic.”

The West Catholic Leonard and Helen Mazur revisited was much different than the school of his day.

With dwindling enrollment the two merged in 1989 utilizing the former West Catholic Girls campus, and its present name was adopted in 2013. 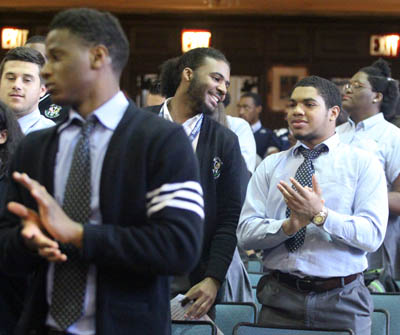 In 2012 a special Blue Ribbon Commission recommended the closing of West Catholic, along with several other high schools. But Archbishop Chaput opted instead to turn the management of all the archdiocesan Catholic high schools to a newly formed and independent Faith in the Future Foundation, with no closures at that time.

Enrollment of the schools appears to be stabilizing after years of decline. At this time West Catholic Preparatory High School has an enrollment of 365 students and rising annually.

“This gift of $5 million is extraordinary and it is dedicated to strengthening academic life and assist students who are needy,” said Christian Brother Richard Kestler, West Catholic’s president. “Not many schools have such benefactors.”

Will this generation of students prove as loyal as the Class of 1963? Student Body President Jasmine Mays hopes so. “I think this gift will do a lot of good things for the school and encourage others to come to the school,” she said.

Mays, like many of West’s current students, is not Catholic but has attended Catholic schools starting with St. Francis de Sales in West Philadelphia because her mother believes in the Catholic schools. Now she will be heading to Villanova University as a Gates Millennium Scholar.

“I hope that I will have a career and able to give back as much if not more than Mr. Mazur,” she said. 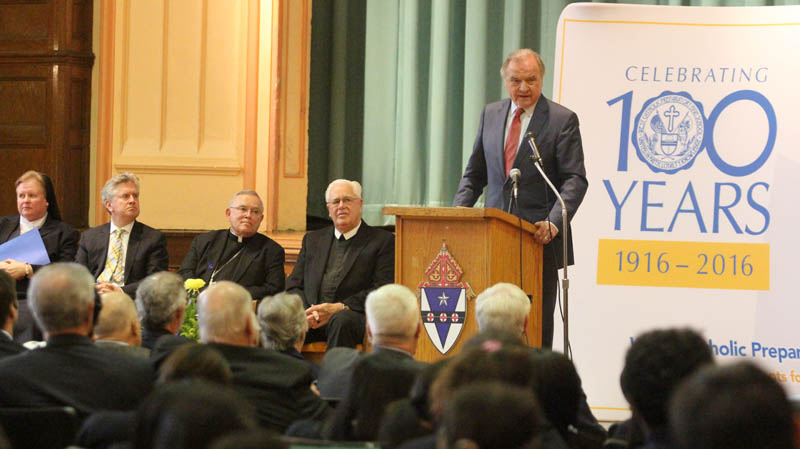 PREVIOUS: Cabrini College set to become a university this summer

NEXT: Registration opens for women’s gathering this fall