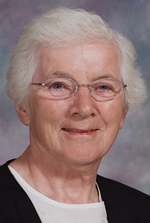 Sister Marie Linehan, O.S.F., formerly Sister Maria Urban, died in St. Ann Convent in Tacoma, Washington, on April 19. She was 84 and had been a professed member of the Sisters of St. Francis of Philadelphia for 66 years.

Sister Marie (Mary Linehan) was born in County Cork, Ireland. Although she entered the congregation in 1945, she did not officially enter candidacy until 1948. She professed her first vows in 1950. Her sister, Sister Carmel Joseph Linehan (deceased), was also a member of the congregation.

Sister Marie ministered primarily in education, child care and pastoral services, particularly in the Archdiocese of Seattle for 23 years. She served as a house parent at St. Ann Home in Tacoma for 17 years. In 2010 she returned to Tacoma where she lived at St. Ann Convent and served in prayer ministry until her death.

Sister Marie also served for 35 years in the Diocese of Spokane, including 11 years as a house parent at St. Joseph Children’s Home. She also taught for a short period of time at St. Charles School.  In later years she served as a chaplain at Sacred Heart Medical Center and as a volunteer at Hospice of Spokane.

Additional ministry experience included her work in the Baker Diocese where she taught at Sacred Heart Academy in Klamath Falls.

Sister Marie’s funeral Mass was celebrated April 23 at St. Ann Convent in Tacoma. She is survived by her brother, Dan Linehan; her sister, Norine Fitzpatrick; her nieces and nephews and by her Franciscan family.

PREVIOUS: Sister of St. Joseph, a longtime teacher, dies at 93