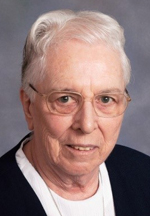 Born in Philadelphia, Sister Marie entered the Congregation of the Sisters, Servants of the Immaculate Heart of Mary in 1952 from St. Joan of Arc Parish in Philadelphia and professed her vows in 1955.

She taught in elementary schools in the Archdiocese of Philadelphia and the Dioceses of Metuchen, Hartford and Allentown. Sister Marie was assigned to Camilla Hall in 2010.

The funeral Mass was celebrated in Camilla Hall on April 21. Father William E. Dean was the celebrant and homilist, and Msgr. Joseph Logrip and Father Robert A. O’Grady concelebrated.

Sister Marie is survived by members of her I.H.M. community, loving cousins and friends. She was predeceased by her parents, Joseph Patrick and Marie Mitchell McCarty.

NEXT: St. Joseph Sister dies at 79, was grant writer and teacher