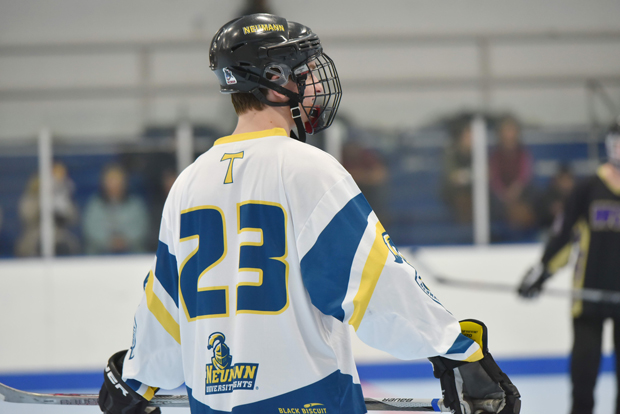 During the last two seasons Neumann is 69-2, for a .971 winning percentage, playing against much larger colleges from across the country. The club’s 35-1 mark this year surpassed its 34-1 record in 2014-15.

Dr. Rosalie Mirenda, Neumann’s president, sent her congratulations to Coach Lee Strofe and the team late Saturday night, noting that the Knights joined the Villanova Wildcats as the second team to bring a national title to Delaware County in the span of a week.

The Knights never trailed in the championship match. Junior P.J. DiMartino broke open a scoreless contest with two goals in the second period – one short-handed and one on a power play.

After UNLV narrowed the Knights’ lead to 2-1 early in the final period, sophomore Tyler Kraft pushed the margin back to two goals with a score at the 9:12 mark. DiMartino iced the game and notched a hat trick with an empty-net goal late in the third period.

Goalie Mike Maczynski, a senior, racked up 16 saves in the win.

In the two Final Four games, the Knights outscored their opponents 14-2, including a 10-1 blowout of Michigan State in the semi-finals.

The National Collegiate Roller Hockey Association (NCRHA) invited 24 teams to participate in the tournament out of more than 170 member clubs nationwide.

In early matches, played on April 6 and 7 for seeding, the Knights beat Bethel University, 3-2; UNLV, 3-2; and the University of Missouri at St. Louis, 8-3. With the field narrowed to 16 clubs for the single-elimination tourney, Neumann drubbed the University of Rhode Island, 15-0, and Farmingdale State College, 6-3, on April 8 to reach the Final Four.

In their last four tournament games, the Knights outscored their opponents 35-5.

PREVIOUS: Villanova player’s winning shot is no surprise to his high school coach