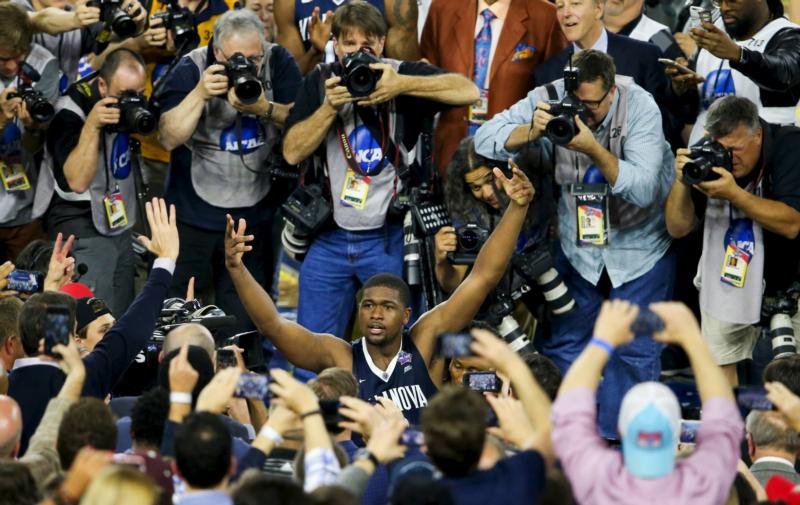 Villanova Wildcats forward Kris Jenkins (2) reacts after the 77-74 win over the North Carolina Tar Heels April 4 in the championship game of the 2016 NCAA Men's Final Four in Houston. Jenkins is a 2013 graduate of Gonzaga College High School in Washington. (CNS photo/Troy Taormina-USA TODAY Sports via Reuters)

WASHINGTON (CNS) — When Kris Jenkins got the ball with the score tied in the final seconds of the NCAA men’s basketball championship game April 4, his former high school coach had no doubt that the Villanova player would make the shot.

The three-point buzzer-beater by Jenkins clinched the game for the Wildcats and was essentially “the same shot from the same spot” he had made countless times before, said Steve Turner, head basketball coach for Gonzaga College High School in Washington, where Jenkins played forward and was the team captain.

The coach, watching Villanova play North Carolina on television with his wife and friends, couldn’t have been happier for his former player when his jump shot gave the Wildcats a 77-74 victory just as the clock ran out.

(Read more about the game here.)

And one day after the big game, when he and Jenkins were both on the media circuit talking basketball, he couldn’t wait to talk to him and congratulate him personally.

Jenkins, a 2013 graduate of the Jesuit high school, who played all four years, calls Turner whenever he is in town. The two talked after recent NCAA tournament games.

The enthusiasm from the previous night’s game at NRG Stadium in Houston before an announced crowd of 74,340 was going strong the next morning at Gonzaga. There was “such a feeling of joy” and everyone was “excited for Kris on the big stage,” Turner told Catholic News Service April 5. “We’re one big proud community and one big proud family,” he added.

The school’s website immediately posted a video clip of the game’s final seconds.

Turner said what made Jenkins such a good player in high school, where he won Gatorade District of Columbia player of the year two years in a row, was “his ability to work so hard and continue to be a leader,” not just in scoring “but leading by example and being a true student-athlete working hard in the classroom and on the court.”

Another sidelight to the NCAA championship game was that Jenkins was playing against his brother on the opposing team — Tar Heels guard Nate Britt. The Britt family, who met Jenkins through basketball, adopted Jenkins in 2007 when Jenkins’ mother, Felicia, had a job offer coaching basketball in South Carolina and thought her son would do better academically, and could continue playing basketball, with the Britts.

On “Good Morning America” just hours after his winning shot was viral news, Jenkins credited his mom for teaching him how to shoot.

“She started with me when I was young and she even coaches me on my shot still to this day,” he said, adding she was “shocked” he was left open to make the winning shot.

“We were both stunned,” he added.

Villanova’s win was its second men’s national title. The previous time the school won the national title was in 1985 when it beat Georgetown University. That also was the last time a Catholic college or university won the men’s national basketball championship.

In celebration, the school was closed April 4 and a parade for the team is scheduled to take place in Philadelphia April 8.