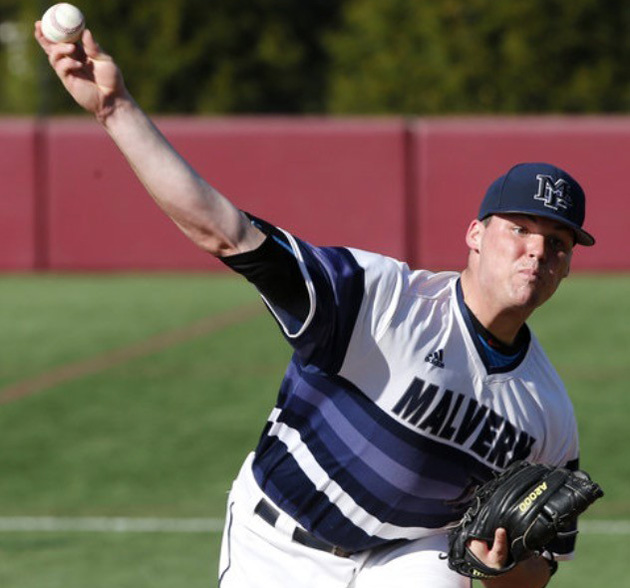 When a season begins with a walk-off home run, if often portends future success.

So when senior Chance DiFebbo lifted a two-run blast over the right-field fence to turn a 1-0 deficit into a 2-1 victory over visiting St. Joseph’s Prep on March 26, the Friars couldn’t wait to see how the next few months would unfold.

It also provided a snapshot of what would occur later. Through April 21, the Friars have amassed a 17-1 overall record and a perfect 4-0 mark in the Inter-Academic League. Although the Friars’ most recent win — 15-7 over Penn Charter Friday, April 22 — might appear to be a blowout, Malvern needed to erase a 5-1 deficit.

Many of Malvern’s other victories have included nail-biting finishes, including two other walk-off contributions from seniors Cam Williams and Jake Mullan.

“In many of those, we came back in the late innings,” said junior pitcher Jimmy Kingsbury. “We are a confident team that believes we will find a way to win because we have a deep pitching staff and excellent defense.”

Both of those qualities were on display on April 19. In a key Inter-Ac match-up against Springside-Chestnut Hill – both teams entered with 2-0 records – the Friars received a run-scoring double by Williams in the first inning and a monstrous, two-run homer by Muntz in the top of the fifth to defeat the Blue Devils, 3-2.

Jimmy Kingsbury pitches from the stretch during a Malvern Prep game earlier this year.

Kingsbury and sophomore Billy Corcoran combined for five innings of one-run ball and the aforementioned Malvern defense did the rest.

“Our pitching has been tremendous and the true anchor of our team’s success,” said Malvern coach Freddy Hilliard. “(Assistant Coach) E.J. Moyer has done an outstanding job, as he always does, with a plethora of talented arms to put us in a good position each time out. Unlike most high school teams, we’ve been able to rely on our depth in the bullpen to take pressure off of our starters and constantly keep teams from getting too comfortable.”

“Our goal is to win our conference and go on to win the (post-season) Independent School Tournament,” said Kingsbury. “We buy into Coach Hilliard’s team philosophy. Every person on the team contributes and we believe that if we battle for seven innings, and focus on executing the things within our control, we will have opportunities to win.”

In the win over Springside-Chestnut Hill, the Friars were in a small jam early on. Muntz, however, picked off runners from first base in each of the first two innings, thereby quashing SCH’s momentum.

“The win over Chestnut Hill was definitely a huge one,” said Williams. “Being the only other undefeated team in the Inter-Ac puts us in a very good position going into the rest of our Inter-Ac season.”

At 17-1, it is difficult to find much fault with Malvern’s effort.

“Obviously, we’re happy with the way the season has gone,” said Hilliard. “We felt like we shouldn’t have lost the game we lost, but we also realize that we’ve probably pulled off a few wins that we may not have deserved. I’m most pleased with how well our kids have come together and started to buy into our process and team-oriented goals.

“Honestly, our goal is fairly simple — we just want to play the best brand of baseball we can every time out no matter the day of the week or name of the opponent. We feel our league is the best league from top to bottom in the state, and it’s quite unique in that it’s really a battle every game because we do not have league playoffs. So our priority each year is always to compete for another league title.

“We also set our sights on our private-school state tournament, and lastly we tend to judge our best teams here by the ones that were able to hit the 30-win mark.”

“One of the best things to have happened to us this season is that we’ve been in a bunch of close games; some we’ve had to come from behind and others we’ve had to hang on to a tight lead,” he said. “These types of games magnify everything in terms of what you do well and the mistakes you make. I’m just real proud of our kids for the way they’ve battled and fought each game to the last out.”

NEXT: Local Catholic grad taken in 1st round of NFL draft