As in the days of slavery, we as a nation again support the intentional amputation of certain children’s ancestry in whole or in part, and laud the commercial human reproductive system that requires the amputation to survive. 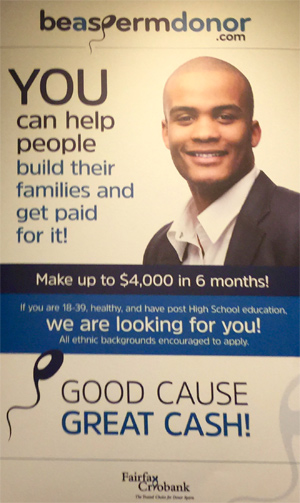 The advertisement at right, which hangs in car 110 on SEPTA’s Paoli/Thorndale line, makes the truth of this statement all too plain. In this, the Year of Mercy, Pope Francis has requested us to perform concrete works of mercy which includes “Instructing the Ignorant.”

What Americans today have forgotten, or may have never known, are their country’s equitable principles and what we as a nation owe to posterity.

When we fought the American revolution, we rejected the notion that equality could ever be man-made. In the Declaration of Independence we specifically stated that nature’s God, through the laws of nature, creates all men equal. In our federal Constitution, we pledged to ensure that posterity would enjoy every right we claimed for ourselves.

This idea, that posterity would have the same rights we do, found its fullest expression in the Virginia Declaration of Rights penned by George Mason in May 1776: “all Men are born equally free and independent and have certain inherent natural Rights, of which they cannot by any Compact, deprive or divest their Posterity.”

Donor-conception, however, is just such a compact. A veritable army of citizens — the transit authority, advertisers, egg and sperm sellers, processors, egg and sperm buyers, refrigerator manufacturers, lawyers, doctors, and the state which licenses many in this commercial system — work together to ensure that some children grow up not knowing one or both of their biological parents. This is public action at its worst.

In his famous “I Have a Dream” speech, Dr. Martin Luther King said: “When the architects of our republic wrote the magnificent words of the Constitution and the Declaration of Independence, they were signing a promissory note to which every American was to fall heir.”

That promise included the promise not to take from others that which nature gives, and one of the first things nature gives to all citizens is a biological mother and a biological father. For us as a nation to work together to sever a child’s biological roots today is no less tyrannical than it was during the slave trade.

As we celebrate the national holidays of Mother’s Day and Father’s Day this year, may we return to our senses and re-embrace biological mothers and fathers as essential to everyone’s life, liberty and pursuit of happiness. Attaching this comment to a letter to your state representatives would be an easy way to make your opinion known.

Ellen Giangiordano is a member of St. Margaret Parish, Narberth.

PREVIOUS: Say it isn’t so: Was his namesake saint a myth?

NEXT: Prince and his unique journey toward God