Two Philadelphia Catholic high schools are welcoming new leaders in the role of president, with responsibility for school enrollment, fundraising and marketing.

Colistra has been at West since 2012 as vice president for institutional advancement. During his tenure he worked to raise almost $2 million during the 2014-2015 school year. He was also responsible for overhauling admissions and recruitment, resulting in a 51 percent rise in enrollment over three years.

Prior to 2012 Colistra worked in development at La Salle College High School. He holds a bachelor’s degree in psychology from Ithaca College and is earning his master’s in education and educational leadership from St. Joseph’s University.

“I have been prepared for this role through many personal and professional experiences,” Colistra said in a statement, “but none more important than the last four years that I have spent at West Catholic Prep.”

West Catholic adopted the moniker Preparatory in 2013. It became a coed high school in 1989 following the merger of the girls’ school, founded in 1927, with the boys’ school, begun in 1916.

“This school has the strongest and most committed board members, alums, teachers, students and families that I have ever been around and together we are poised to set the standard for urban Catholic education,” Colistra said.

He and wife Colleen are the parents of two sons, Ryan, 4, and Luca, 2, and they are members of Holy Martyrs Parish, Oreland. 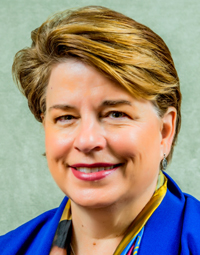 She most recently was director of marketing and communications for the World Meeting of Families in Philadelphia last year, managing events and programs for the gathering. Her efforts to manage the social media platforms of the World Meeting resulted in more than 1 billion impressions during the week of Sept. 22, 2015.

Previously Pando was communications director for the Miraculous Medal Shrine in the city’s Germantown section. She holds a degree in chemistry and business from the University of Delaware.

In a statement, she said St. Hubert’s “has a rich history of preparing young ladies to become women of faith and integrity in our rapidly changing world.”

The school was founded in 1941 in the city’s Tacony section.

Pando said she anticipated working with school Principal Joanne Walls and the staff to serve the students and their families “who have invested in the lifelong gift of Catholic education.”

Pando herself is a product of Catholic schools, graduating from Our Mother of Consolation School in Chestnut Hill and Mount St. Joseph Academy, Flourtown.

She and husband Jim are the parents of two daughters, Cyndi and Jenna, and they are members of St. Helena Parish, Blue Bell.

In addition to her career accomplishments, Pando also is cofounder of “Friends of Trisomy 21,” a nonprofit that raises funds for Children’s Hospital of Philadelphia for families with a child with Down syndrome.

The recent appointments were announced by the Archdiocese of Philadelphia’s Office for Catholic Education and Faith in the Future Foundation, which manages the 17 archdiocesan high schools.

Christopher Mominey, secretary for Catholic education and COO for Faith in the Future, praised Pando as “a woman of deep faith who will serve as an excellent role model for our young women in the Catholic tradition.”

In addition he expressed confidence that Colistra “possesses the right leadership qualities to continue West Catholic’s growth and development in the years to come.”

NEXT: $50K gift by Connelly Foundation will benefit special education