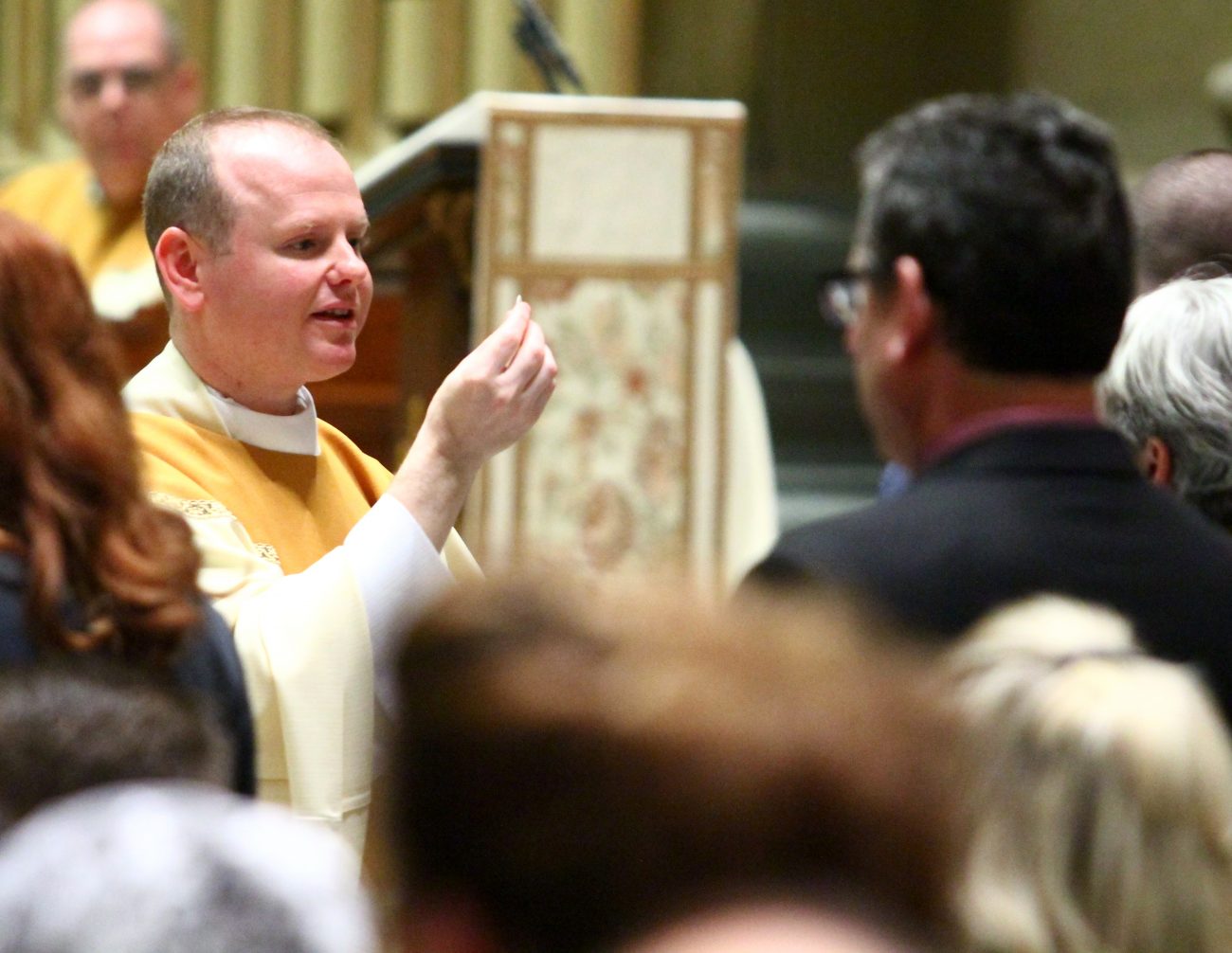 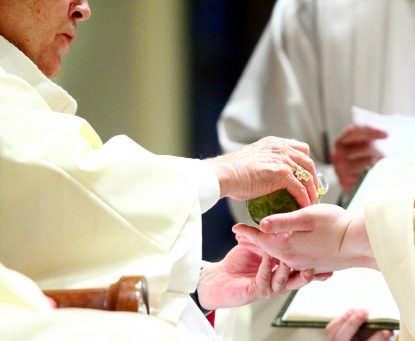 Archbishop Chaput anoints the hands of Father Matthew Windle during the ordination rite. The cloth used to clean Father Windle’s hands of the sacred chrism was given to his mother, Marie Windle.

Sacred Heart Church in Havertown was filled with God’s grace and blessings on Sunday, May 22 as newly ordained Father Matthew P. Windle, a longtime parishioner, celebrated his first Mass as a priest.

Father Windle, 37, was ordained the day before by Archbishop Charles Chaput in the Cathedral Basilica of SS. Peter and Paul, completing seven years of formation at St. Charles Borromeo Seminary. (See a photo gallery from the ordination Mass here.)

All those years of prayer, study and parish service had led to these special moments culminating in Sunday’s Mass on the Solemnity of the Most Holy Trinity and before a throng of faithful congregants including family, friends, neighbors and former teachers.

Among those attending was his paternal grandmother, Anne D’Alessandro-Windle, 94, who has belonged to Sacred Heart since 1951. While the Windle family had prayed the rosary ever since Father Matt was a young child, it never occurred to D’Alessandro-Windle that her grandson would become a priest.

“It feels wonderful,” she said. “I feel blessed.” 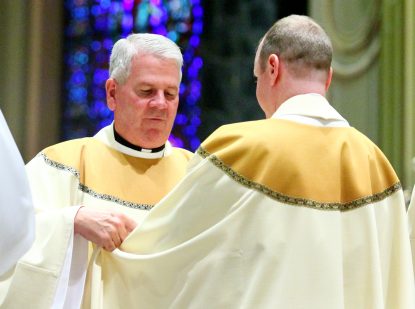 “It was an honor and a blessing,” said Jimmy Windle.  “It’s surreal.”

The Sacred Heart Choir, under the direction of Mary Ann Alton, provided music.  Seminarians from St. Charles Seminary served at the altar.

Father Redcay, pastor of St. Patrick Parish in Malvern where Father Windle served as transitional deacon for the past year, preached the sermon.

“I was honored to be asked to preach at this Mass of Thanksgiving,” said Father Redcay. “I’m honored to be with you, Matt, and your family.”

As this was a day to remember the Holy Trinity, Father Redcay talked about the love by the Trinity for all Creation and how God wants all of us to experience his unconditional love time and time again.

“Each one of us has been a recipient of that love,” he said. “It’s a love to be shared.”

Father Redcay ended his homily by reminding Father Windle and all priests present to “restore peace with God” each day and to help all people experience God’s love.

“May we get all people to experience the love of the Father, the Son and the Holy Spirit,” he said. “God bless you, Father Matt.”

After Communion, Father Windle expressed his gratitude to all in attendance for their prayers and support on the journey to priesthood.

“I thank Father McKee and everyone at Sacred Heart. I want to thank all my family and friends for your love and support,” he said.

Then it was time for Father Windle to present his mother, Marie, with the cloth that had been used to clean his hands after the Archbishop Chaput anointed him with chrism at ordination. This cloth symbolized that which shrouded Christ when he was laid in the tomb.

“I was just so proud of him,” Marie Windle said. “I was overwhelmed. God is good.”

Father Windle blessed the congregation before the dismissal and the Mass concluded with the hymn “O God Beyond All Praising.”

The thought of entering the priesthood had occurred to Father Windle during childhood but it took time for it to grow within him. He attended St. Laurence School in Upper Darby before transferring to Sacred Heart in the third grade.

The Windles’ home was dedicated to the Sacred Heart by Deacon John Suplee in 1988 and that along with praying the rosary influenced Father Matt to discern a possible religious vocation.

Sister Donna Kelley, his sixth grade teacher who helped prepare him for the sacrament of confirmation, always saw Matt as a quiet, good young man.

“He was very sincere,” said Sister Donna. “His family was precious. It was an honor just to see him on the altar.”

Father Windle attended Haverford High School and Rosemont College where he earned a bachelor’s degree in business. He worked for Vanguard in various positions but as he was looking for a change, he believed that was the time to heed the call to the priesthood.

“The call hit me again when I was at Vanguard,” he said. “I needed some change, something that wasn’t there. I prayed for guidance and support.”

“With God, all things are possible,” said Father Windle’s father, Frank. “We feel blessed as a family.”

While it is a special time for the Windle Family, it is also a blessing for the entire Sacred Heart community.

“It’s a great blessing for the people of the parish,” said Father McKee, Sacred Heart’s pastor.

Father Windle has been assigned by Archbishop Chaput to serve as parochial Vicar at St. Maximilian Kolbe Parish in West Chester, effective Monday, June 20.  Until then, he will assist at local parishes and is looking forward to a well-deserved trip to Colorado. 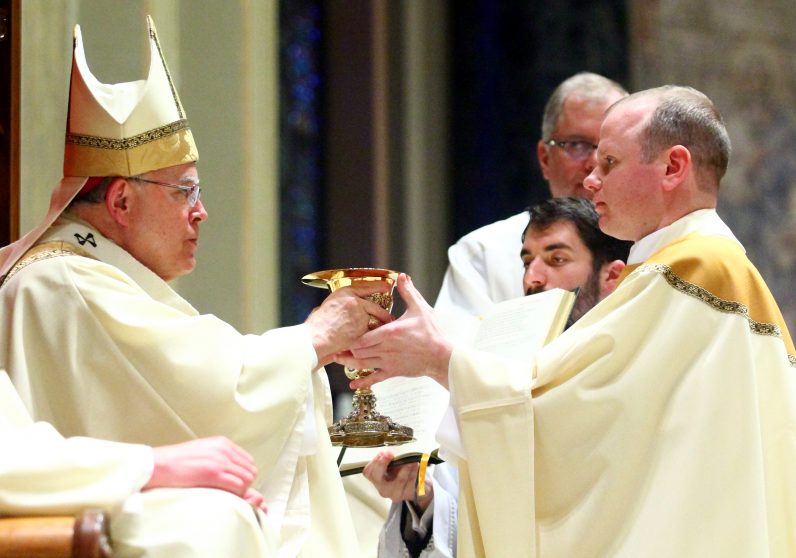 Archbishop Charles Chaput presents the paten and chalice, vessels for holding the bread and wine for the Eucharist, to Father Matthew Windle.

NEXT: St. Joe’s Prep raises its cup – for charity