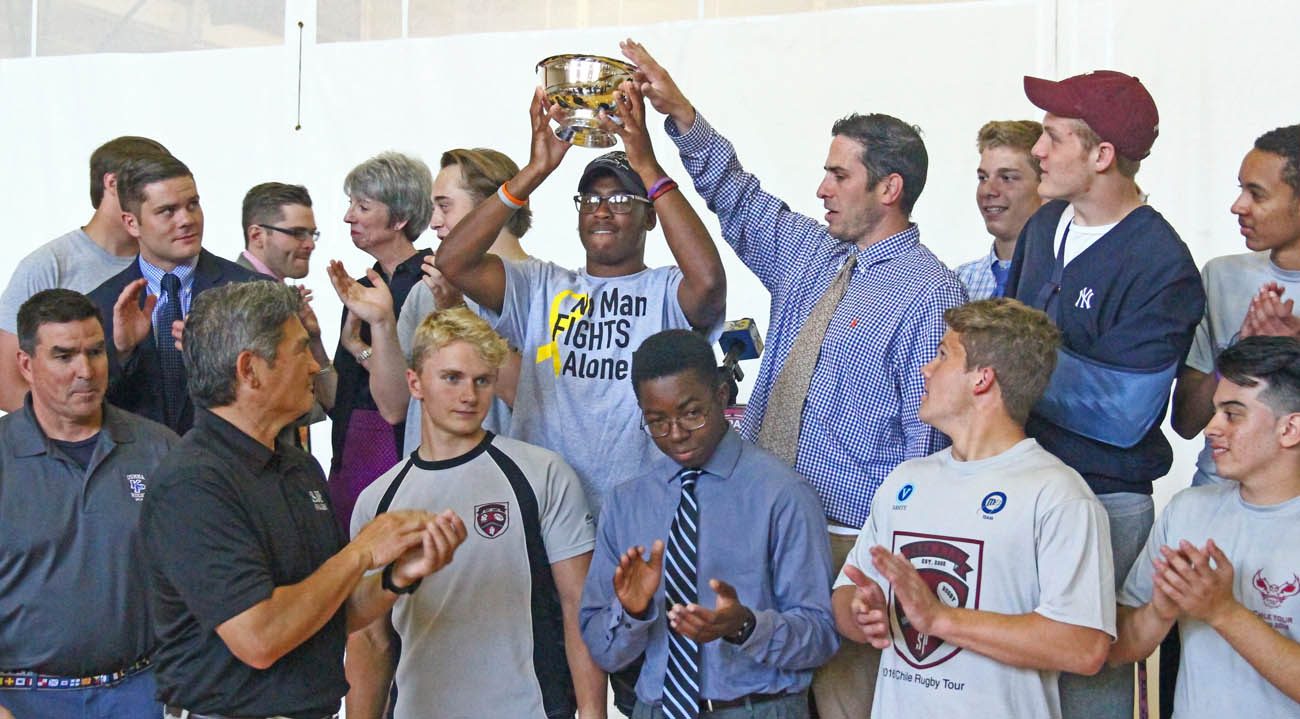 Members of the St. Joseph's Preparatory School rugby team hoist the Hurtado Cup, a school distinction in an intramural competition to raise the most money for a designated charitable cause. (Photo by Sarah Webb) 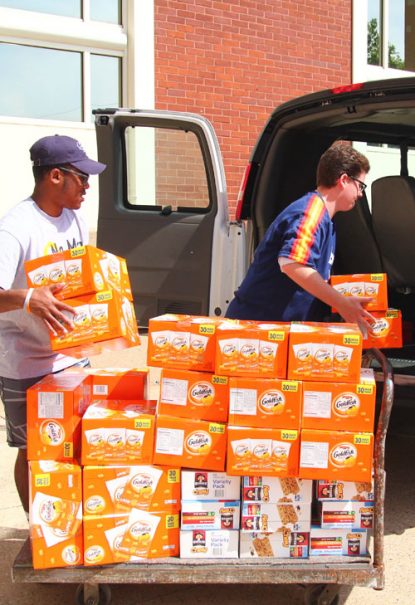 As trophies go, you’ve probably never heard of the Hurtado Cup, which is only natural because Friday, May 20 was the first time it has been awarded.

It’s an intramural award given by St. Joseph’s Preparatory High School to the team (or organization) at the school that has excelled, not on the field, but in fundraising for a chosen charitable cause. (See a photo gallery from the event at the Prep, here.)

The Hurtado Cup is named for St. Alberto Hurtado (1901-1952), a Chilean Jesuit priest noted for his work among the poor, who was canonized in 2005. His Hogar de Cristo (Home of Christ) has become a leading charity in Chile.

It is appropriate that this year’s Hurtado Cup was won by the Prep’s rugby team whose members visited the grave of St. Alberto during a recent visit to Chile.

In fact this is just a fraction of the funds raised for outreach programs at St. Joseph’s Prep annually. That amounts to over $100,000 not including turkeys donated to the school for the annual Thanksgiving Food Drive, according to Bill Avington, the school’s director of communications.

The ceremony very appropriately was at Kelly Fieldhouse, the site of many of the Prep’s sports activities. Father John W. Swope, S.J., president of St. Joseph’s Prep, in his opening remarks quoted St. Alberto, who once said, “Christ roams through the streets like so many of the suffering poor, sick and dispossessed.”

“The Hurtado Cup Challenge is a culmination of a lot of the work that goes on here being done here day to day at St. Joseph Preparatory School,” the president said.

Leo Vacarro, moderator for the Hurtado Food Pantry that the school conducts, said, “We run a lot of different drives here and we assist many different charities in various ways. You never know when you put out an appeal how much you will raise, but I’ve learned never to doubt the generosity of this community, especially when they know the specific purpose.”

Rugby team captain Kyle Crawford explained, “We did a lot of the fundraising through our parents and friends. It is a very worthy cause.”

The two benefitting charities chose what form the donation would take. Based on the needs suggested, donors were asked to pay the cost for specific items, and these were purchased and given to the charities rather than cash.

One of those charities was Nutritional Development Services, which distributes food through U.S. Department of Agriculture grants for its summer feeding programs at over 450 sites in the archdiocese. NDS chose to take its share of the gift in the form of such items as tables, chairs, sporting goods and books because some of the sites it serves could be just empty lots and these materials are needed for the programs, according to Anne Ayella, director for community relations for NDS.

Face to Face, which operates community programs in East Germantown, requested its assistance in the form of food, according to Susan O’Hagan Marley, the nonprofit organization’s director of development. “We have an after school program and we have a July summer program and an August Back to School program,” she said. “Our children come to us hungry.”

Clearly, the result of St. Joseph Prep’s rugby team’s fundraising, and that of all of the other teams, will have an impact that St. Albert Hurtado would appreciate.

NEXT: Bonner students hear of saintly priest who was ‘just like you’