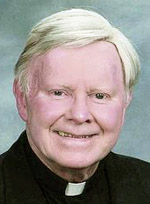 He was then appointed pastor of St. Robert in 1986 served for 19 years until he was named pastor emeritus in 2005. He also served as administrator at Regina Coeli, a residence for retired priests of the archdiocese.

Msgr. Phillip Cribben, who knew Msgr. Kane tracing back to boyhood days at St. St. Matt’s then through St. Charles Seminary as classmates and lifelong friends, remembers him as “a humble, simple guy, happy in his priesthood.”

He remembers not long ago the two were talking about a fellow priest who had a hard assignment, and Msgr. Kane remarked he never had a difficult assignment.

“I know he did,” Msgr. Cribben said, “they were not all easy, but he was happy in them. He loved the people of God in every assignment and they thought the world of him.”

“I was his business manager at St. Robert,” said Permanent Deacon George Morris. “He was a terrific man, smart as a whip who could remember everyone in the parish and was loved by the people and they would do anything for him. When we built the Parish Education Center he took out a 25-year mortgage and it was paid off in five years.”

Msgr. Kane loved sports, especially the Phillies. “You could call any time but don’t call when the Phillies were playing,” Deacon Morris recalled.

There will be a viewing Wednesday, May 25 at 9 a.m. for Msgr. Kane at St. Robert Bellarmine Church, followed by his 11 a.m. funeral Mass celebrated by Archbishop Charles J. Chaput. Concelebrants will include Bishop Timothy C. Senior, Bishop Joseph Martino, Msgrs. James Beisel, Richard Bolger and Joseph Garvin; Father Raymond Himsworth and Msgr. Cribben, who will be the homilist.

Msgr. Kane is survived by his brothers Thomas F., Francis X. and James Kane, and nieces and nephews.

Interment will be at Resurrection Cemetery, Warminster.

NEXT: Former pastor, renowned for his preaching, dies at 77