Former pastor, renowned for his preaching, dies at 77 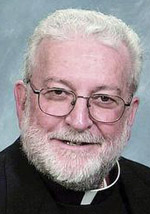 He was ordained May 16, 1964 by Archbishop John J. Krol at the Cathedral of SS. Peter and Paul and his initial assignment was as parochial vicar at St. Katharine of Siena Parish, Wayne, followed by faculty at Roman Catholic High School.

“I had him in class,” said Father Joseph Bongard, an alumnus and current rector of Roman Catholic. “He taught history and was an excellent teacher and he was incredibly committed to the students. He was hyper-involved with shows and music at the school and was happy to be a priest.”

Father Bongard noted Bishop Daniel Thomas of Toledo credits Father Wilz as especially encouraging his vocation while he was a Roman student.

After 16 years at Roman Father Wilz was named parochial vicar at Holy Trinity Parish, Morrisville, followed by parochial administrator and pastor at St. Mary of the Assumption, Phoenixville, in 1987. In 1998 he was named pastor of St. Catherine of Siena, Horsham, where he served until 2003.

“He was probably the holiest priest I ever met,” said Matt Jones, a St. Catherine parishioner. “He was very reliable and dependable, and asked people’s advice and considered it. He got me through some tough times in my life including three surgeries.”

After St. Catherine he served as chaplain for the Grey Nuns of the Sacred Heart in Yardley, officially retiring in 2006.

In retirement he returned to Holy Trinity, Morrisville, one of his favorite parishes.

“He was a dyed in the wool priest,” said Father John Eckert, pastor of Holy Trinity. “He was active in the Charismatics and Secular Franciscan(s). He was a great preacher and when he preached, he taught. We had his 50th anniversary of priesthood celebration for him here.”

Father Wilz will have a viewing at 9 a.m. on Thursday, May 26 at Holy Trinity Church followed by his funeral Mass celebrated by Bishop John J. McIntyre. Concelebrants will include Msgr. John C. Marine, Father Eckert and Father Charles McElroy, who will be the homilist.

Father Wilz is survived by his sister, Margaret Mary Flynn. Interment will be at Gate of Heaven Cemetery, Berlin, N.J.

NEXT: Franciscan Sister, a nurse for 50+ years in archdiocese, dies at 88