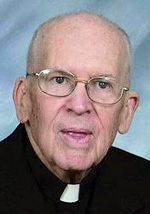 Msgr. John P. Boland, 86, who served as pastor of St. Rose of Lima Parish in North Wales for two decades, died May 7.

He was ordained May 19, 1955 by Archbishop John F. O’Hara at the Cathedral of SS. Peter and Paul and after a summer assignment to the Convent of the Holy Child, Sharon Hill, he was sent to the Diocese of San Juan in Puerto Rico, in preparation for Hispanic ministry.

Msgr. James J. Graham, who was in residence at St. Rose of Lima with Msgr. Boland for 19 years and is now the pastor, remembers him as “a great guy, and an extremely natural person whom everyone liked. He very rarely got excited and took everything as it came.”

If there was one thing Msgr. Boland did for enjoyment, it was reading, Msgr. Graham said. “He not only bought books, he read them.”

Helen Diebold, a parish secretary at St. Rose, said Msgr. Boland “was a ‘gentle’ man. Everyone had warm feeling for him, and I never heard him say an unkind word to anyone.”

During his tenure an addition was added to the school and a gymnasium built as well as improvements made to the church, “but everyone was willing to help out, because they respected him so,” Diebold said.

In retirement Msgr. Boland returned to St. Christopher where he remained in residence almost until his death.

At St. Christopher he and Msgr. Joseph Garvin, the current pastor became good friends. After Msgr. Boland’s own family moved out of the area, “he would come over to my family’s house with me for Sunday dinner,” Msgr. Garvin said. “Even when I couldn’t come he would go there himself.”

Msgr. Boland was a brilliant man and “people always said that when he preached they learned something,” Msgr. Garvin said. “He especially loved to celebrate Mass for the children. He could talk to them in a language they understood. We will miss him.”

At St. Christopher, a Sunday, May 15 viewing for Msgr. Boland was held at 4 p.m. followed by a 6 p.m. Mass with Msgr. Garvin as celebrant.