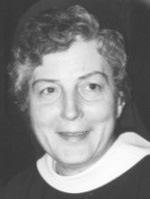 Born in 1926 in Washington D.C., she was the daughter of Dario Gaddi and Madeleine Abell. She attended Holy Comforter Grade School and Notre Dame Academy High School in Washington, D.C. before entering the Sisters of St. Joseph of Chestnut Hill in 1944. She professed final vows in 1952.

Sister Eugenie graduated with an A.B. from Chestnut Hill College and an M.A. from St. Louis University.

She taught at Holy Child and St. Bernard Grade Schools in Philadelphia and at Archbishop Prendergast and Archbishop Ryan high schools. She also ministered at Chestnut Hill College.

She was area delegate (regional superior) and elected to a leadership position as councilor for the congregation. She served as secretary for the S.S.J. Development Office and then as Secretary General for the Superior General.

In 2002 she began as a volunteer at Epiphany Convent in Plymouth Meeting until 2011 when she became a resident in St. Joseph Villa in Flourtown until her death.

Her funeral Mass was celebrated April 18 at St. Joseph Villa.

NEXT: Sister of St. Joseph, hospital chaplain and teacher, dies at 79