Football training plan turns into a stellar success on the track 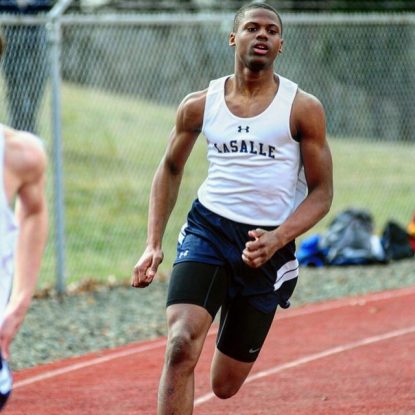 La Salle High School senior Winston Eubanks picked up running track at first as a way to become a better football player, but grew to love running. He will move on to Shippensburg University this fall. (Courtesy La Salle College High School)

When La Salle High School senior Winston Eubanks began his junior year, his only athletic goal was becoming a better football player. So he had an idea: run track.

“I had no idea that it would lead to this,” said Eubanks.

In the 122nd-annual Penn Relays that finished on April 30, Eubanks and three teammates supplied the Catholic League with a rather impressive highlight.

In the 4×100-meter relay for large schools, La Salle placed an outstanding second. After taking a handoff from Chris Della Donna, Eubanks ran the second leg before transferring the baton to Kyle Johnson, who in turn dished to Charles Headen. La Salle’s time of 42.41 seconds was its fastest of the season.

“We thought we would run a little faster, but we were content with our time since it was a new school record and fastest time in Pennsylvania,” said Eubanks. “We were very excited about our performance.”

Before his junior year, Eubanks had never imagined running track, let alone as a vital part of a school-record foursome.

“The beginning of this year, I started to fall in love with track,” said Eubanks, who next year will play football at Shippensburg University. “It’s become something that I cherish and appreciate just as much as football now.”

In football, Eubanks was a wide receiver and kick returner. He helped the Explorers stun St. Joseph’s Prep in the Catholic League championship.

“We worked really hard all off season and to see our hard work pay off was one of the best moments of my life,” said Eubanks. “I think we have a very strong chance at winning the PCL again this year for track. We have a lot of depth in several events but we know it’s not gonna be easy. The Catholic League has a lot of competition and we’re gonna have to give our best efforts in order to win, but I am confident in my team and I know we can do it.”

Like most of those who run in the vaunted Relays – young, middle age, or old – Eubanks described the experience as “amazing.”

“I think we all will remember running in front of all those people,” said Eubanks. “Our race was right after USA vs. The World and the crowd was ecstatic. Hearing the crowd cheer and being able to run against the best competition around is something we will never forget.”

In the girls’ 4×400-meter relay, the quad of Brittany Winter, Schola Eburnas, Christine Mancini, and Olivia Arizin lifted Cardinal O’Hara to a gold medal. Behind the Lions were Archbishop Ryan and Bonner-Prendergast.

After a sterling 52-plus-year career coaching track and cross country, Ed Ulmer announced that he will retire at the end of the outdoor track season. After starting his coaching career as an assistant at since-closed Cardinal Dougherty, his high school alma mater, Ulmer became head coach at Archbishop Ryan for both the girls and the boys in 1966.

Reaching 50 years at Ryan was special, Ulmer said, for it signified a distinct accomplishment. Five decades. Half of a century. The mind boggles.

Ulmer, 73, will be missed by students, athletes, peers and reporters. Why the latter? Because among the most reliable Catholic League coaches to promote his or her players with a return phone call has been Ulmer.

Two years ago, Ulmer had openly talked about his inevitable retirement. He lauded his wife of now 54 years, Mary Ann, describing her as a “saint” for her dedication to the family – including five children and 13 grandchildren – while he was out coaching. He talked about how much he will miss his student athletes.

And then, just like that, Ulmer’s focus turned back to his athletes at Ryan, where he has accrued an incredible 29 combined Catholic League titles in cross-country, indoor track and outdoor track and field.

With less than one month remaining, the former longtime history teacher said he is basking in the same daily routine that has, in his words, helped keep him young despite the anxiety of schedules, weather problems, etc. He will have more to say at a career-ending banquet at Ryan on May 31.

In the meantime, Ulmer will keep doing what he does best: coach.