Even against a phalanx of defenders, an Archbishop Carroll player makes her way to the goal in the Catholic League championship game May 23. (D'Mont Reese)

The streak continued for the Archbishop Carroll Lady Patriots’ lacrosse team Monday, May 23 as the team took on the Archbishop Wood Lady Vikings in the Philadelphia Catholic League championship game at Neumann University.

For the 16th consecutive season, top-seeded Carroll (17-3) captured the league title and this time the Patriots dominated the second-seeded Vikings (11-3) by a score of 21-4.

In addition to sealing the Catholic League crown, the victory also extended the Patriots’ winning streak in the league to 205, dating to the league’s inception in 2001.

It took some time for things to get going in the game because just over two minutes into the action, rumbles of thunder and peels of lightning forced a delay that lasted more than an hour. Nevertheless, Carroll eventually achieved its goal by working together as a team.

Prevailing on offense was junior and midfielder Sam Swart who accounted for seven goals. 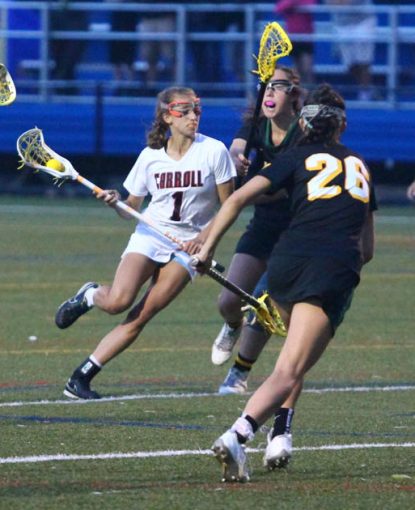 “We all worked together,” Swart said. “I’m a lefty. I took advantage of the right lane.”

Swart got things going early with two goals in the opening minutes. Then the storm came through, prompting the teams to take shelter and wait until it moved out.

Although it took a while before play could resume, once the Patriots were back on the field they did not waste a moment in picking up where they had left off. Matey scored and Swart completed her hat trick.  Sophomore midfielder Katie Detwiler registered her first goal of the evening, prompting Wood to take a time out.

Late in the first half, the Patriots held on to a 12-0 advantage but it was not over. Sarah Welsh found the net in the final minute of the stanza and cut the score to 12-1 at halftime.

The Vikings’ Bridget Neilly tallied a goal early in the second period. But Carroll kept coming as Swart and Murphy scored again, as did freshman midfielder and defender Amber Germer along with sophomore attack Sydney D’Orsogna. Welsh finished her hat trick late in regulation.

Senior attack Alexis Kucia scored in the last seconds for the final score and the Patriots swarmed each other on the field to celebrate their big victory and take home the Catholic League trophy for yet another year.

“It feels good to continue the tradition,” said Swart. “I hope it goes on.”

“It feels amazing,” said Rachel Matey. “I started playing as a freshman. Winning with this team is just amazing.”

As a senior, Matey plans to continue her lacrosse career at Ohio State.

“Defense supported us all throughout the season,” said Ferraioli. “They had fast breaks. We rely on each other to play.”