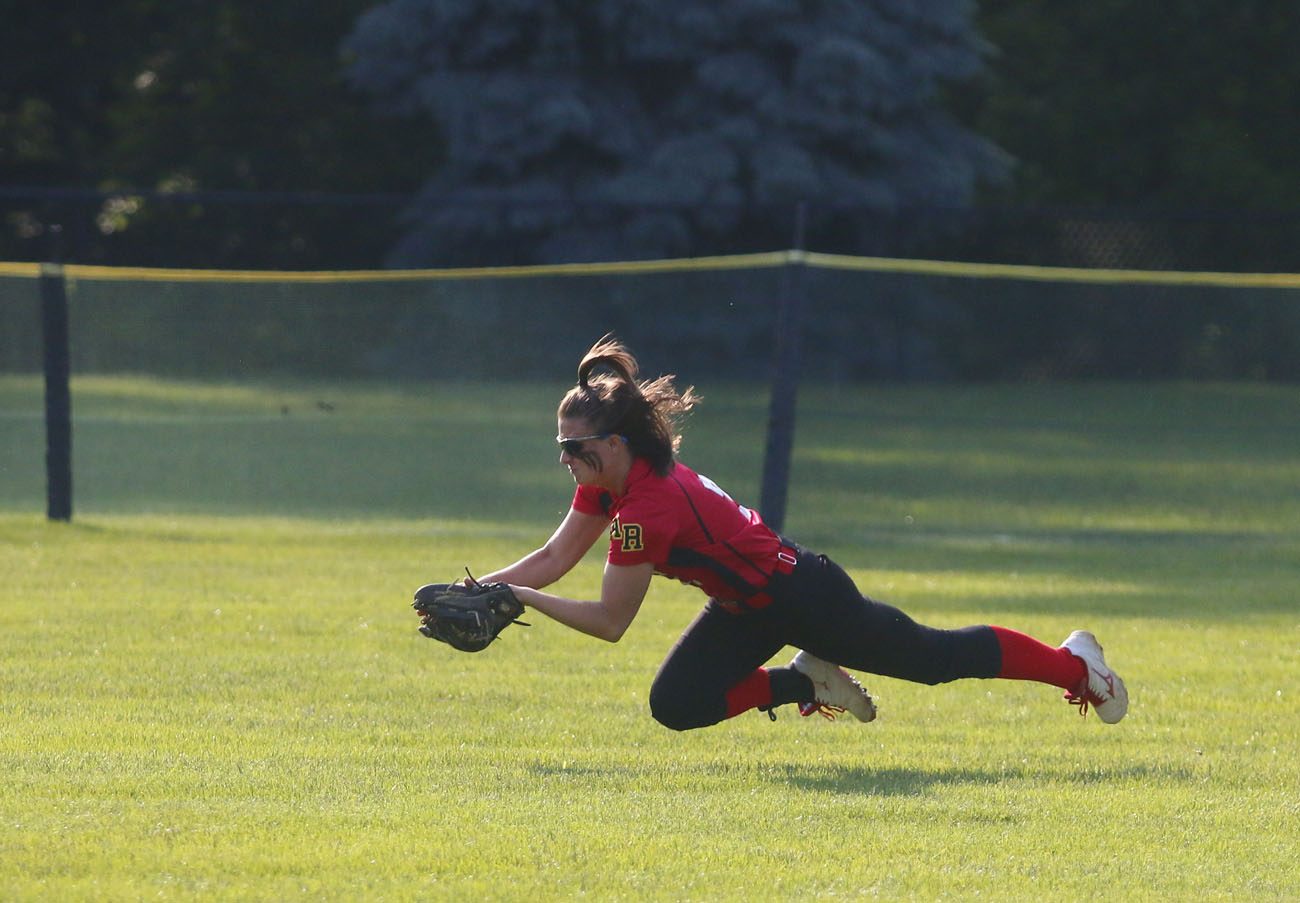 Archbishop Ryan center fielder Vicki Black stretches out to record the final out with runners on the corners for a 4-2 Catholic League championship win. (Photos by Sarah Webb) 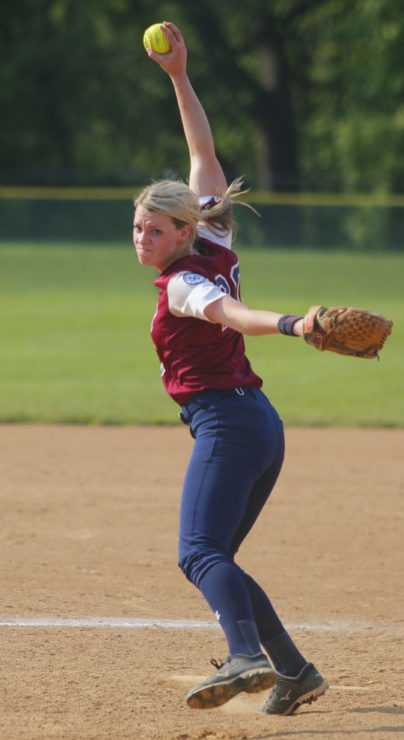 Win a championship, it’s the best ever. Win another one, now that is something exceptional. Win a third?

Welcome to the world of Archbishop Ryan’s softball program.

On Wednesday afternoon, May 25 at Arcadia University, the Ragdolls defeated Cardinal O’Hara, 4-2, for their third consecutive Catholic League title. (See a photo gallery of the game here.)

While the past two were not particularly surprising, given the star-studded make-up of those teams, this championship was a bit distinctive.

“No one gave us a chance to do this,” said senior pitcher Lex Marasheski. “We believed we could, but others thought it would be too tough, that we had graduated too many seniors.”

Ryan coach John Kidwell said he, the players, and the coaches were able to use that sentiment to their advantage.

“All three championships were special, but this year was different,” said Kidwell. “We weren’t expected to be here. We’ve had some ups and downs, but we kept getting better and believing in ourselves.”

Ryan finished the Catholic League regular season with a 10-2 record, one game behind first-place Cardinal O’Hara. One of Ryan’s defeats occurred on April 25 against the Lions, the Ragdolls’ first league loss in three seasons.

Heading into the final, that previous disappointment apparently helped.

“We scored too late against them the first time,” said Marasheski, a few minutes after O’Hara had beaten St. Hubert in the semifinals 24 hours earlier. “This time will be different.”

When the Lions reminisce on their loss, they will undoubtedly wince. Uncommon base-running errors, combined with an occasional lack of discipline at the plate, cost them dearly. Then again, Ryan also made some uncharacteristic defensive miscues, so perhaps this was a case of two great teams unable to fully avoid a major case of nerves.

The adage that the best players step up at the most important junctures held true in the form of Ryan senior Sarah Ostaszewski. Three batters into the first inning, the perennial All-Catholic catcher, bound for St. Joseph’s University in the fall, slammed an RBI triple that scored her sophomore sister Kate Ostaszewski from first base. She then came home on a sacrifice fly/error off the bat of cleanup-hitter Izzy Hoch.

The Lions answered in their half when Annemarie Banes doubled home lead-off hitter Maura Kane.

Sarah Ostaszewski again helped orchestrate a two-run inning in the top of the third. She walked, stole second and took advantage of a missed connection at second base to swipe third. After Hoch walked and stole second, junior Reilly Kerr threaded a two-out single to center field that scored two runs.

“I wasn’t trying to do too much,” said Kerr, who, as a freshman, knocked in three runs to help beat Lansdale Catholic in that championship. “Just put the bat on the ball.”

In the bottom of the third, O’Hara loaded the bases without the benefit of a ball leaving the infield. Kane was hit by a pitch, Banes was safe on an error and Lexie Cervella walked. With one out, a pop out to second base resulted in a momentum-deflating double play when the O’Hara runner at second inexplicably took off for third and was easily doubled off for the final out of the inning.

O’Hara trimmed its deficit to 4-2 on an RBI single by Breanna Hickey in the sixth, but runners at second and third were stranded.

In the seventh, O’Hara threatened once again. With one out, Kane singled. One out later, Banes did the same — her third hit of the afternoon. Up stepped Cervella, whose walk-off single in the bottom of the 12th had helped defeat John W. Hallahan in the league semifinal and placed the Lions in the Catholic League final for the first time in school history.

Cervella pushed the count full and stroked a shot to center field. Unfortunately for her, it was aimed at Vicki Black, who made a diving catch to end the game.

“It was a tough way to go out to say the least,” said Cervella, one of the league’s classiest athletes. “She made an amazing play.”

Kidwell was relieved that the potential game-tying tally was poked in the direction of Black.

“She’s the best defensive centerfielder we have ever had at Ryan,” he said. “Maybe in the entire Catholic League.”

Though in the spotlight for her defense, Black shrugged away the accolades.

“I just wanted to catch it,” she said. “I was just doing my part to help us win.” 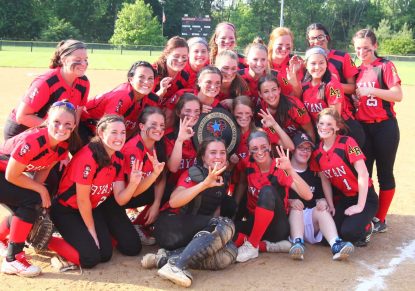 NEXT: Saints find a way to win, even when they don’t hit