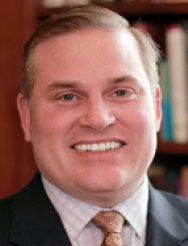 Philadelphia resident Brian Brown, president of the National Organization for Marriage, will take on an additional role as a leader in the pro-family movement after his election as president of the World Congress of Families.

A member of Our Lady of Lourdes Parish in Philadelphia’s Overbrook section, Brown was elected to the position at the recent World Congress of Families X conference in Tbilisi, Georgia. He will continue to serve as president of NOM.

In a statement, Brown said he looks forward to “continuing to work to advance the pro-family movement in the U.S. and around the world. Preserving and promoting the natural family as the core institution of society is an essential task if we are to build strong, stable, healthy communities.”

The World Congress of Families is anchored in truths enshrined in the United Nations’ Universal Declaration of Human Rights, which states, “Everyone has the right to freedom of thought, conscience and religion” (article 18), and that the family “is the natural and fundamental group unit of society and is entitled to protection by society and the State” (article 16(3)).

The congress focuses on providing protections to which the natural family is entitled, while also protecting the right to freedom of conscience and religion. The congress upholds the rule of law, condemns violence and respects the dignity and rights of all.

“In recent years, secular leaders around the world have become obsessed with advancing so-called ‘alternative’ family structures, Brown said. “But there is no family structure more valuable and important to children and civilization as a whole than that of a married father and mother raising the children born of their union in an intact and loving family.

The mission of the World Congress of Families is to help secure the foundations of society by uniting and empowering leaders worldwide to respect, protect and defend the natural family founded on marriage between a man and a woman; parental rights and the welfare of children, including their need for both a mother and a father; the dignity and sanctity of all human life from conception; and freedom of speech, religion and conscience in an atmosphere of respect for all.