St. Charles Seminary seeks to move all operations off site

This file photo shows the main entrance and front of the College Division, or lower side, of St. Charles Borromeo Seminary, Wynnewood. (Photo by Sarah Webb)

St. Charles Borromeo Seminary’s Board of Trustees has called for scrapping the planned consolidation of seminary operations on one 30-acre section of the campus and to “affiliate with a local Catholic college or university and relocate the entire seminary operation” to that location, according to a statement released by the Archdiocese of Philadelphia Tuesday, June 7.

But a feasibility study by the Catholic Foundation of Greater Philadelphia recently looked at alternative models to that plan, which was presented to the trustees in May.

The board recommended the seminary “cease actions aimed at consolidation on the upper campus,” according to the archdiocesan news release.

In an interview with CatholicPhilly.com, Bishop Timothy Senior, the seminary’s rector, said the estimated $50 million cost for renovating the buildings that would have housed the college seminarians was the key factor.

The massive three-story stone structures were built between 100 and 145 years ago. The newest residence and classroom facility, Vianney Hall, is 40 years old. All would need significant upgrades.

Since the estimated proceeds of selling the lower-side property would amount to about $45 million, a gap of at least $5 million would have to be raised just to complete the project. That also would not account for additional fundraising to build a long-term endowment fund to support future needs of the seminary.

The Catholic foundation, which is an independent development organization for Catholic organizations in the region, in its study advised against the plan.

The crucial question, as Bishop Senior put it, was, “Is it really the best thing to put all that money into those buildings?”

The seminary today is situated in buildings “which are consuming a disproportionate amount of resources.” Only a fraction of the money needed to “maintain a behemoth” is currently being spent on the physical plant today – the annual $500,000 in maintenance costs is “not even close to what it needs.”

The seminary’s physical layout reflects a different era of formation in which hundreds of seminarians were housed in the style of an army barracks, with resident priests located in a separate wing.

Current best practices of priestly formation call for small groups of seminarians living closely with a resident priest who could model a healthy, integrated priestly spirituality and ministry.

The seminary’s trustees have called for the development of a new plan for seminary operations that may include “newly constructed buildings on or near the campus” of an area college.

Such construction would obviously have costs but likely would not require new facilities such as a dining hall, gymnasium, fitness center or other amenities already on a college campus, depending on the nature of the arrangement.

Archbishop Charles Chaput accepted the recommendation by the Board of Trustees and tasked Bishop Timothy Senior, rector of the seminary, to begin studying available options.

Father Patrick Welsh, vice rector of St. Charles, will work directly on developing the new plan over the next year. If accepted by the seminary board and approved by the archbishop, implementation could take two to three years, Bishop Senior estimated.

He also confirmed what seemed certain with Tuesday’s announcement: the entire 76-acre seminary campus will at some point be sold.

Development proposals for the site are a separate project from the plan to relocate the seminary, so it is too early to tell how they will proceed.

A proposal by Main Line Health to buy the 45-acre lower-side parcel surfaced last year but a lawsuit by a third party has stalled that plan in court. The regional health care company owns Lankenau Hospital, located across Lancaster Avenue from the seminary.

Where popes walked is ‘not a museum’

It is unknown what will become of the massive College Division buildings and ornate St. Martin’s Chapel, where Pope Francis last fall met seminarians and spoke to bishops, preceded in doing so by St. John Paul II in 1979.

But just as some parishioners have seen their parish close and in some cases their church sold off or even razed, a seminary, like a parish, is about more than buildings.

“It’s not about the past, and this is not a museum,” Bishop Senior said. “We are carrying on in a way that is sustainable in the long run. We are doing the best job we can with the men who are responding to God’s call today.”

He added that the start of a new plan for the seminary “allows us to pursue new facilities that will further enrich and better serve the contemporary academic, spiritual and human needs of our seminarians and lay students.”

Bishop Senior found inspiration recently to keep Tuesday’s announcement in perspective. Before he drove to preside at the graduation ceremonies for Conwell Egan Catholic High School in Fairless Hills on Monday, he stopped into the St. John Neumann Shrine in Philadelphia to pray before the saintly bishop’s tomb.

There he reflected on how St. John, as bishop of Philadelphia, moved the seminary from its location near the cathedral at 18th Street out to Glen Riddle, Delaware County, nearby today’s Franciscan Sisters’ motherhouse and Neumann University.

In fact, St. Charles Seminary’s current location in Wynnewood (Overbrook) since 1871 is its fourth site since its founding in 1832, having begun in a house near Old St. Mary’s Church.

This year the seminary has seen its enrollment rise to 142, and Bishop Senior expects 164 to begin or continue their priestly formation in the fall.

Of this year’s total, 45 men are studying for the Philadelphia Archdiocese – 19 in theology, 17 in college, two in pre-theology and seven in the spiritual year.

St. Charles does more than form men for the priesthood in its theology and college divisions. A third division, the School of Theological Studies, offers graduate and undergraduate degrees for clergy, religious and lay men and women.

Currently 89 people are enrolled in the division, including 42 men in formation for the permanent diaconate for the archdiocese.

Another 228 people are studying in catechetical certificate programs for a total of 317 men and women in the school, previously known as the Religious Studies Division, and more recently as the Graduate School of Theology.

In addition to higher seminarian enrollment and new faculty members at the seminary, Bishop Senior said giving to the annual Seminary Appeal is up too, at about $3.4 million. All of that supports ongoing operational costs, he indicated. 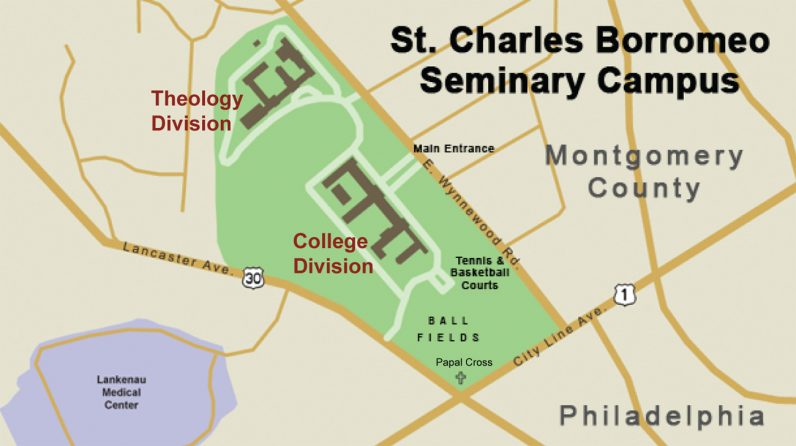 PREVIOUS: Catholic newcomers to Philadelphia raise their prayers — not only in English