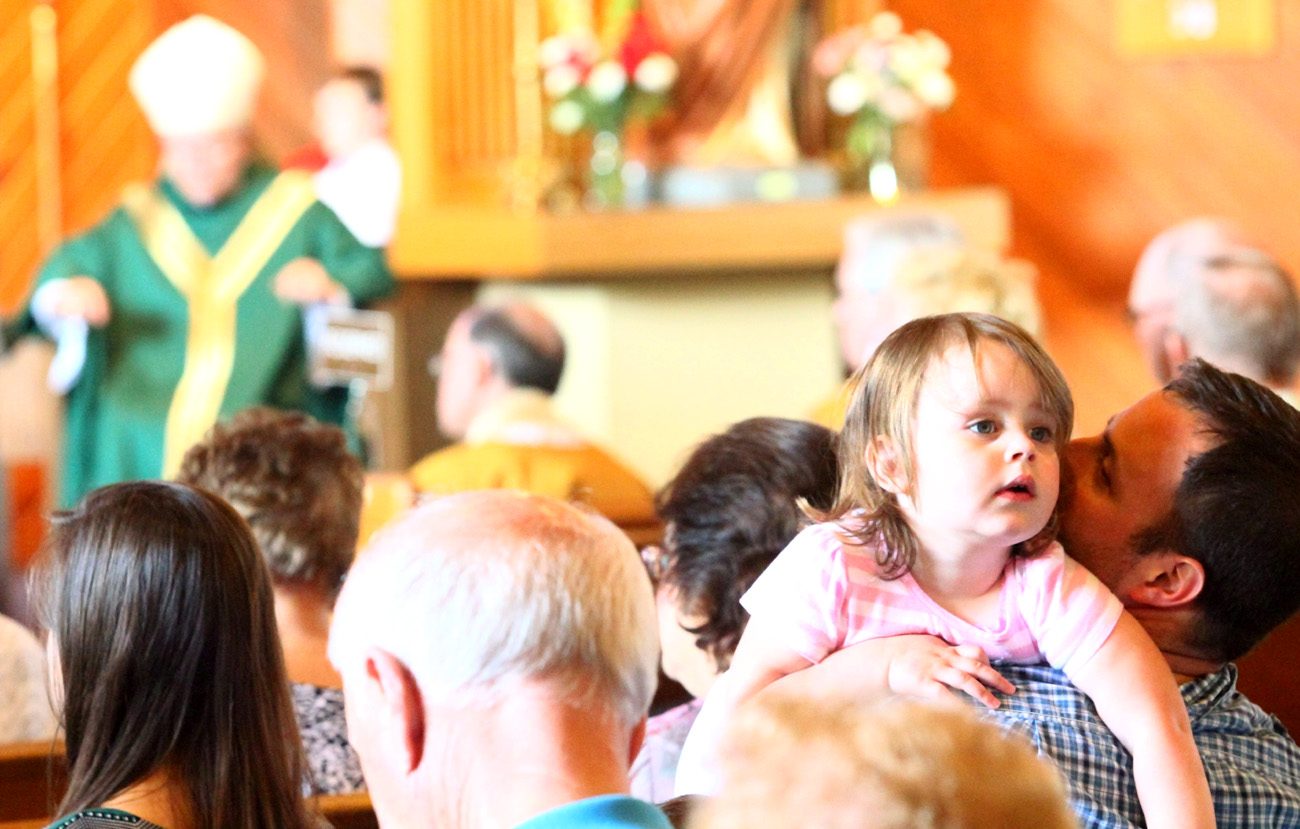 Raffaella Dirienzo was one of the youngest in attendence for Sacred Heart Parish's anniversary Mass.

Sacred Heart Parish in Oxford just closed out its 100th anniversary with a Mass celebrated by Archbishop Charles Chaput on June 5. In so doing, he was visiting the Philadelphia Archdiocese’s most outlying parish — just about 54 miles from the Cathedral Basilica of SS. Peter and Paul.

“We are on the edge of the diocese and also the gateway to the diocese coming up the old Baltimore Pike from Baltimore and Washington, D.C.,” said Father William Lange, Sacred Heart’s pastor.

Technically, Sacred Heart was founded in 1915 but Catholic roots are much deeper than that. According to a parish history researched by parishioner Dick Daley, an 1852 local newspaper article spoke of Catholic worship services celebrated in an upstairs apartment owned by the Murphy family and similar services at various locations tracing back to 1840.

Circuit priests would bring the Eucharist and celebrate Mass for the faithful, according to the article. “The priest would then leave the Body and Blood for weekly distribution until he came again. It was a great honor for a layman to protect the stored Eucharist.”

This early example of pre-Vatican II usage of eucharistic ministers by necessity is striking, although one might suspect the “body and blood” would consist only of the consecrated hosts.

Local Catholics might also on occasion attend Mass at either St. Malachy in Doe Run or Assumption B.V.M. in West Grove.

In 1877, through a gift of land from the Timoney family and with the encouragement of Father James Kelly, pastor at Assumption, a chapel was built. It was mostly with an eye to the future because the congregation totaled only 32 families. Back then Catholics were a bit of a rarity in rural Chester County and looked upon with suspicion by their neighbors.

In October 1915, Sacred Heart had grown sufficiently to be raised to the status of a parish, with Father John McCarthy as the founding pastor. The first baptism was of Beatrice Miriam Devon; the first marriage was of Albert Magee and Lillian McIntire.

A singular event was in 1956 when a neighborhood child of about 10, Herbert Bevard, came to the rectory and asked Father Patrick Dougherty what he should do to became a Catholic. With the permission of Herbert’s parents Father Dougherty gave him instructions and he was received into the Catholic Church.

In time as a young man he had another question. How could be become a priest?

Herbert Bevard was ordained priest in 1972 and bishop in 2008 as Bishop of St. Thomas in the U.S. Virgin Islands, the diocese he still shepherds. As a sequel, his parents eventually became Catholic and are buried in the graveyard by Sacred Heart.

The parish continued slow growth over the years through good times and ill. It ultimately outgrew its first little church and now worships at a much larger church on Route 10, which was dedicated by Cardinal John Krol in 1982.

Chester County was booming in 2002 and at a time when many parish schools were closing, Sacred Heart opened a 16-classroom school. While the numbers are clearly down in most recent years, “It’s a happy school,” said Father Lange.

The parish itself has grown from those 32 pioneer families to approximately 1,500 families and about 1,100 attending Mass on a given Sunday.

“They are good, faithful people,” said Father Lange, who points to a vibrant and family-oriented PREP program and a host of activities, both spiritual and social.

The latter is going a long way toward integrating the parish into the larger community. “We are having a carnival in two weeks, and that definitely attracts others, letting them know that we are here with them and for them,” he said.

Looking at the pioneer years, the tiny congregation was virtually entirely Irish. Today a glance at the parish bulletin shows people with many different national origins leading or participating in the various ministries.

For well over a decade, Sacred Heart has offered a weekly Spanish language Mass, a boon to Latino Catholics, who represent the fastest growing segment of Oxford’s population at this time. Father Lange points to Msgr. Francis Depman, pastor of St. Rocco, the Hispanic parish in nearby Avondale, for assistance in making it a success.

“Hispanics started coming when St. Rocco was being built and they are still coming,” she said. “We have a vibrant parish that counts young and old. We have members from our old church and new younger members.”

Parish societies are well attended, especially an active Ladies Auxiliary and the Knights of Columbus (Council 13241) located in the parish.

“I think Sacred Heart is a great place to be,” Leach said.