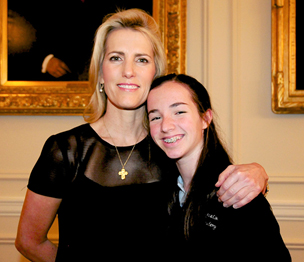 At its annual fundraiser, Regina Coeli Academy hosted nationally known speakers May 25 at the Union League of Philadelphia to raise awareness about the benefits of a Catholic classical education and to raise funds for the academy, particularly for financial aid for students.

Some 400 attendees heard presentations on the event’s theme, “Reclaiming the American Spirit: a Renewal of Family and Education.”

Syndicated radio host and political analyst Laura Ingraham discussed today’s unique period in history from a cultural, academic and political perspective. She reflected on the importance of a Catholic, classical education and its role in producing small lights that will one day shine bright as the next generation of great leaders.

She discussed the importance of family and her Catholic faith in her professional and personal life, and described her faith journey as a convert to Catholicism. Ingraham reminded the guests of the importance of being informed and engaged citizens, knowledgeable of history and actively participating in the political process.

Raymond Arroyo, best known as the lead news anchor for EWTN, shared his wit and insight as he spoke about contemporary American culture, the American family and the value of forming and educating children through “storytelling” and a classical education.

He shared reflections on his unique relationship with EWTN’s foundress, the late Mother Angelica, and spoke about his just-released book about her, “Mother Angelica: Her Grand Silence.”

During the evening, the audience heard testimonials about the benefits of a Catholic, classical education from faculty, parents and students of the Regina Coeli schools. Eighth grader Anna Castagno demonstrated the “Rhetoric Stage” of a classical education by declaiming a selection from “Les Miserables” by Victor Hugo.

The annual event supports the private Regina Coeli Academy, founded in 2003 in Abington, and three other sister schools in the Philadelphia region including Regina Angelorum Academy in Ardmore, Regina Luminis Academy in Downingtown and Regina Academy at St. John the Baptist in Ottsville.

The high school recently announced the director of the new program, Andrew Youngblood. He has experience in classical education including serving as headmaster of Regina Coeli and a theology professor at Christendom College.

The Regina Chesterton Academy will be initially available to freshman and sophomores at O’Hara beginning in September and become a four-year program by September 2018. It will offer a curriculum created by the Chesterton Academy in Edina, Minnesota, now in use in several schools around the country.

The curriculum features a neoclassical model that emphasizes logic and rhetoric, as well as math, science, philosophy and the humanities including art, music, drama, Latin and Greek.

According to information from Cardinal O’Hara, the Academy will focus on a Socratic dialogue in which the teacher moderates an informed classroom discussion of the primary works of the masters of classical thought.

“Through the guidance of Our Lady, the rich heritage of the classical, liberal arts education, and the insight of G.K. Chesterton,” said Youngblood in a statement, “it is our goal to engage the students, not only in learning, but in formation, a formation that allows each student to flourish, to think clearly and independently, to discover who they are and to become men and women of faith.”