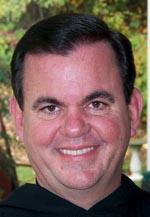 Born Oct. 19, 1957 in Bryn Mawr, he was one of seven sons and one daughter of Joseph G. Denny and Mary K. Schubert and was baptized at St. Laurence Church, Upper Darby. He attended St. Laurence School then entered Msgr. Bonner High School, Drexel Hill, and graduated in 1975. He then attended Boston College where he received a bachelor’s degree in history.

He entered the Augustinian Order at Good Counsel Novitiate, Lawrence, Mass., in August 1980, but withdrew the following March. He then worked for a year in a real estate office and from 1981 to 1985 taught at Msgr. Bonner High School. He reentered the order and began a second novitiate in 1985.

He professed simple vows in 1986 and moved to Augustinian College, Washington, D.C., and earned his master’s in ecclesiastical history at the Washington Theological Union. He professed solemn vows in 1989 and was ordained to the priesthood on Aug. 18, 1990 at Our Mother of Good Counsel Parish, Bryn Mawr, by Bishop Howard Hubbard, bishop of Albany, New York.

From 2002 to 2007 he was a professor of theology at the university and chaplain of the University Law School.

In 2007 he was appointed pastor of St. Margaret of Scotland Parish, Maggie Valley, North Carolina. When the Augustinian fathers withdrew from ministry in Maggie Valley in 2011, Father Denny was assigned as pastor of Our Mother of Good Counsel Parish in Bryn Mawr.

In August 2014 he was appointed prior of the Augustinian community as well. For some time he suffered with ailments of the back and leg. Due to progressive weakness he moved this year to the infirmary wing of Villanova Monastery on March 24.

Shortly after, it was discovered that he was suffering from cancer. He underwent a series of treatments, and on June 13 was admitted to Bryn Mawr Hospital for additional tests. He died there peacefully in the early morning hours of June 20 accompanied by several friars and family members.

Father Denny was a gardener and planted flower beds around the friaries where he was assigned. While at Msgr. Bonner he assigned students in detention to care for the gardens at the school.

He was also a student of American presidential history and enjoyed visiting various significant presidential sites. He was possessed of a good sense of humor, an infectious laugh, and deep appreciation of, and dedication to, his vocation as an Augustinian and a priest.

NEXT: Foundress of order of women religious dies at Mass honoring her vocation