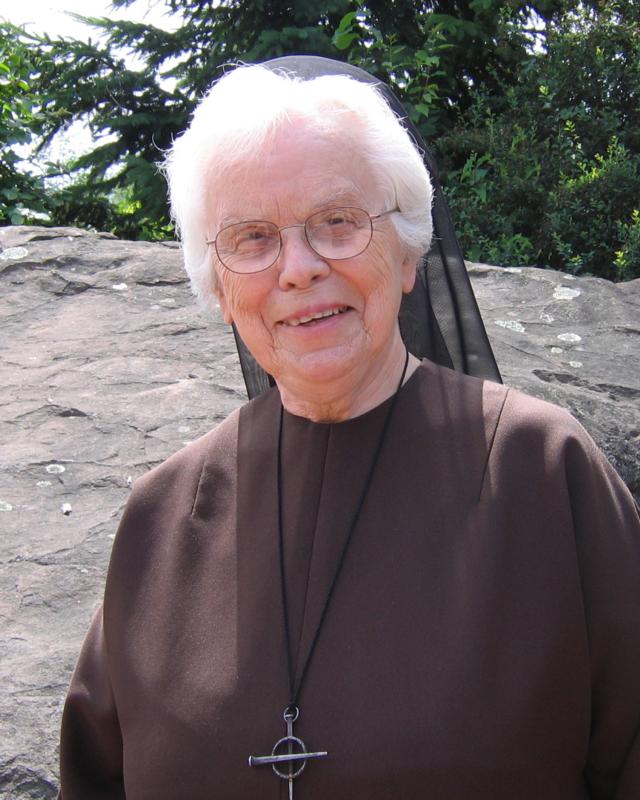 MERIDEN, Conn. (CNS) — Mother Rosemae Pender, 94, foundress of the Franciscan Sisters of the Eucharist, died unexpectedly during a June 26 Mass of Thanksgiving for Consecrated Life celebrated at the order’s motherhouse in Meriden to honor her 75 years of consecrated life.

The event also marked jubilee celebrations for four other sisters in the community.

After renewing her vows with the other sisters, Mother Rosemae presented the constitutions of the religious community to retired Archbishop Henry J. Mansell of Hartford, principal celebrant, during the offertory procession.

She returned to her chair and then was taken to a nearby room, where she received the sacrament of the anointing of the sick from Father Jeffrey Romans, pastor of St. Bridget Church in nearby Cheshire. She died during the Mass.

Before the conclusion of Mass, Mother General Shaun Vergauwen, co-foundress of the order, announced to the congregation that Mother Rosemae had died.

The Mass was attended by 260 friends, religious and priests in the standing-room-only Chapel of St. John.

A funeral Mass for Mother Rosemae will be celebrated July 11 at Holy Angels Church in South Meriden. Burial will be private.

The other sisters who joined Mother Rosemae in celebrating their many years of consecrated life were Mother General Shaun, 60 years; Sister Kieran Foley and Sister Suzanne Gross, 50 years; and Sister Naomi Zimmerman, 25 years.

Mother Rosemae had held leadership positions in her former order, having been a teacher, a principal, a college professor, director of postulants, director of junior sisters and a member of the order’s general council. Mother Rosemae served as the mother general of the Franciscan Sisters of the Eucharist since its founding until 2005.

Among women religious in attendance at the Mass were Sister Anne Walsh, provincial superior for the Apostles of the Sacred Heart of Jesus in Hamden; members of the Daughters of Mary in New Britain; Sister Dolores Liptak from the Sisters of Mercy; and sisters from the Benedictine Abbey of Regina Laudis in Bethlehem, including retired Mother Abbess David Serna and Mother Dolores Hart.

Mother Rosemae was born Sept. 11, 1921, in Elgin, Illinois, the second daughter of George and Rose Pender, and was named Norma Joan. She entered the Franciscan Sisters of Perpetual Adoration in La Crosse and professed her first vows in 1941. She administered and taught in elementary schools in Iowa and Wisconsin and later taught English at Viterbo College in La Crosse.

She received a bachelor of arts degree in English from Viterbo College in 1951 and a master of arts degree in English from The Catholic University of America in Washington in 1957. From 1959 to 1960, she studied at the now-closed Regina Mundi Pontifical Institute in Rome in preparation for directing the religious formation of young sisters. She also pursued post-graduate studies at St. Louis University.

From 1960 to 1964, Sister Rosemae was the director of postulants, and from 1964 to 1970, she was director of junior sisters. In 1964 she was elected to the general council, the administrative body assisting the mother general in the governance of the community.

In the 1960s, as the Second Vatican Council asked religious communities to initiate programs of renewal to revitalize and update religious life to meet contemporary needs, then-Sister Rosemae, along with other formation directors and provincial leaders in the community, formed a group for the purpose of renewal. The group was approved by the Franciscan Sisters of Perpetual Adoration as a provisional province.

In 1973, the Vatican approved the transition of members of the provisional province to a new religious order receiving pontifical status. It was named the Franciscan Sisters of the Eucharist.

Mother Rosemae was named as superior and, subsequently, was elected mother general, serving until 2005. She is known as the mother foundress with Mother General Shaun as co-foundress.

As foundress, Mother Rosemae was considered by her community as the rock of foundation and revered for her many gifts, especially her intense and abiding love of the church, her maternal wisdom and perception and her attentive love for individuals and each one’s particular needs.

Mother Rosemae is survived by her Franciscan sisters, the Franciscan Brothers of the Eucharist, the Franciscan apprentices and numerous bishops, priests, religious men and women and friends throughout the world.

Chalupsky is a reporter at The Catholic Transcript, newspaper of the Archdiocese of Hartford.