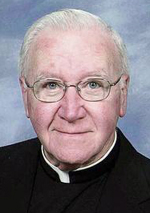 Father Hughes was born in Philadelphia, the son of the late Frank J. Hughes and the late Agnes D. Hughes.

“We were happy friends in the class of ‘52,” said Bishop Louis DeSimone. “All of our classmates liked Jim. He was a gentleman, soft-spoken, hard-working and very priestly.”

Bishop DeSimone also recalls Father Hughes was a self-taught builder, who built a summer home for his family in the Poconos and it was there he spent the early years of his time in retirement. He was especially adept at electrical work.

“We, his classmates, would often call upon him when we needed some electrical work done, maybe for a parish carnival and wanted to save hiring an electrician,” Bishop DeSimone said, although he also recalls there were instances where one might say the end result was unexpectedly dramatic.

Father Hughes’ first assignment after ordination was as parochial vicar at Our Lady of the Blessed Sacrament Parish, Harrisburg.

It was the custom then for the archdiocese to lend one priest to Harrisburg each year, explained Msgr. William O’Donnell, another St. Charles classmate.

“He was a real leader and when he was in Harrisburg he wasn’t just in a parish, he was the bishop’s master of ceremonies,” Msgr. O’Donnell said.

He was appointed pastor of St. Mary Magdalen, Media, and served the parish for 19 years until he was named pastor emeritus in 2000.

At all the parishes where he served he was a welcome addition, according to Msgr. O’Donnell, because in addition to his ministry he was the best maintenance man they could have, adept at carpentry, electric and plumbing, and later electronics.

“He installed the sound system in seven parishes,” he said.

Three of the buildings at St. Mary Magdalen were constructed under his watch, and one was recently refurbished and renamed the Father Hughes Parish Center.

Father Hughes “was a wonderful man to talk to; he had a lot of patience,” said Nancy Pantuliano, parish secretary at St. Mary Magdalen. “He was a mentor to me and I will remember him as a really good friend. He was a workaholic and absolutely very well loved as a pastor.”

Father Hughes is survived by his sister, Sister Agnes Hughes, I.H.M., and nieces and nephews.

Interment was at Calvary Cemetery, Conshohocken.

PREVIOUS: Franciscan Sister, a nurse for 50+ years in archdiocese, dies at 88