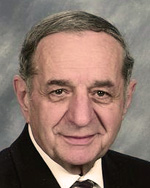 Deacon Maresca was one of the eight children of the late Michael and Teresa (Cianelli) Maresca. He was a graduate of Conshohocken High School and attended Temple University until entry Into the U.S. Navy during the Korean War era. After military service he received a bachelor of science degree in industrial management from Bryant College (now University) in Rhode Island.

He worked at several companies as an industrial engineer and plant manager and also was self-employed until his 2011 retirement. He was married to his wife Theresa (nee Basile) for the past 63 years.

A member of SS. Cosmas and Damian from childhood, he entered the permanent diaconate program and was ordained by Bishop Martin N. Lohmuller at the Cathedral Basilica of SS. Peter and Paul on May 24, 1987.

“He had a beautiful singing voice and directed the choir,” recalled Father Augustus Puleo, who was assigned to SS. Cosmas and Damian as a seminarian. “He also had great devotion to the Blessed Mother and led the Monday night novena.”

The celebrant and homilist for Deacon Maresca’s June 7 funeral Mass at Holy Saviour was Bishop Louis A. DeSimone.

Bishop DeSimone knew Deacon Maresca well from his own years at SS. Cosmas and Damian, both as a parochial vicar and pastor.

“Armand was always dedicated, and his capacity for serving the church was boundless,” Bishop DeSimone said. “He did great work, and in my estimation everybody liked him. I wasn’t still there when he became a deacon, but I had mentioned it to him a few times.”

In addition to his wife, Deacon Maresca is survived by his son Michael, his brother Anthony and his sisters Claire Maresca, Mary Theresa Corallo and Rita Conoshenti.