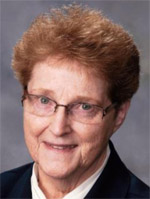 Immaculate Heart of Mary Sister Mary Agnes Kinee, 81, died June 16 at St. Monica’s Center, Philadelphia. She was in the 64th year of her religious life.

Born in Philadelphia, Sister Mary Agnes entered the Congregation of the Sisters, Servants of the Immaculate Heart of Mary in 1952 from Sacred Heart of Jesus Parish and professed her vows in 1955.

Sister Mary Agnes taught in elementary schools in various grades and music in the Archdiocese of Philadelphia and the Dioceses of Harrisburg, Allentown, Trenton and Camden.

In the Archdiocese of Philadelphia, she served as director of parish liturgy at St. John the Baptist Parish and in music ministry and liturgy at Stella Maris Parish for the past 15 years.

Sister Mary Agnes is survived by her sister, Kathleen Harkins, many loving nieces and nephews, her local community from Mary Immaculate Convent in Philadelphia and her I.H.M. community.

She was predeceased by her parents David J. and Jeannette Long Kinee, her sister Jeannette (Lawrence) Andreano, her brother David J. (Mary) and her brother-in-law William Harkins.

NEXT: I.H.M. sister, longtime teacher in archdiocese, dies at 89