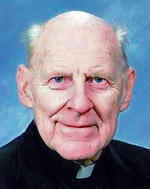 Father Francis G. Lendacky, 82, pastor of St. Agnes-St. John Nepomucene Parish in Philadelphia, died June 26. Born Jan. 16, 1934, he was the oldest still active pastor in the archdiocese at the time of his death.

The son of the late Albert F. and the late Pauline (Posivak) Lendacky, he attended Our Mother of Sorrows School, Bridgeport and St. Matthew High School, Conshohocken, before entering St. Charles Borromeo Seminary.

Father Lendacky served first as administrator and then pastor of St. Agnes-St. John Nepomucene, Philadelphia’s only remaining Slovak parish, since 1978.

The reason he stayed on at St. Agnes-St. John Nepomucene well beyond typical retirement was because it is such a tiny parish, and in danger of closing if he did not.

“He told me that 20 years ago,” said Father Edward Kuczynsky, a friend for many years. “He was an amazing, humble, kind man, probably the the best priest I’ve ever met,” he said. “When he wasn’t in his parish he was very often visiting the sick and shut-ins.”

Eileen Schweyer, the principal of Christ the King School in Philadelphia, is typical for St. Agnes-St. John Nepomucene: she comes in from Jenkintown for Mass. Other parishioners come even greater distances, even those Slovak Catholics who worshiped at the former Little Flower Chapel in Clifton Heights. Wherever they were, “Father Lendacky was committed to sick calls, he would drop everything to visit them,” Schweyer said.

At his parish he maintained the traditions of celebrating a Mass in Slovak monthly and on other Sundays proclaiming the Gospel in both English and Slovak, Schweyer said, adding, “He was beloved by all of us.”

While Father Lendacky was certainly dedicated to his parishioners, in the wider community he was best known for his work with the Legion of Mary, which he joined as a seminarian. He served for years as spiritual director or the Philadelphia Senatus and was a frequent contributor to Legion of Mary publications. In 2006 he published a short book, “Insights of a Legion of Mary Priest.”

“He was involved for a very long time, starting in Norristown, and we all loved him,” said Richard Wieda, a former president of the Senatus. “I worked with him for years and he was just a saintly and humble man, never overpowering.”

His work with the Legion is attributable to “his great love of Mary,” said his cousin, Jerri Harrison. “He married my husband and me, he baptized our daughter and our six grandchildren, but he was more like a brother to me. He was so unassuming, a good man and a wonderful priest.”

There will be a viewing for Father Lendacky beginning at 9 a.m. on Thursday, June 30, followed by his 11 a.m. funeral Mass celebrated by Archbishop Charles J. Chaput. Concelebrants will include Bishop Robert Maginnis, a seminary classmate; Bishop Louis DeSimone, Msgr. Daniel Sullivan, Father Frank Giuffre and Father Kuczynski, who will be the homilist.

NEXT: Immaculate Heart of Mary Sister, teacher and music minister, dies at 81