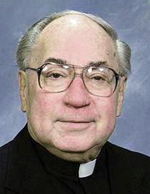 He was ordained at the Cathedral of SS. Peter and Paul by Archbishop John Krol on May 19, 1962. His first assignment was in hospital ministry at All Saints Chapel, Philadelphia, followed by teaching at Cardinal O’Hara High School.

All of his subsequent assignments were connected with Polish ministry, beginning with administrator at the National Shrine of Our Lady of Czestochowa, Doylestown, during a period of financial difficulty when Cardinal Krol was overseeing its reorganization.

Earlier in his career he accompanied Cardinal Krol on a visit to Poland, where he became acquainted with Cardinal Karol Wojtyla.

He later participated in the arrangement for 29 Polish bishops, including Cardinal Wojtyla, to attend the Eucharistic Congress held in Philadelphia in 1976. This led to an unusual distinction as probably being the only American priest ever to be depicted in a Marvel comic book.

It happened after Cardinal Wojtyla became Pope John Paul II and Marvel put out a comic book biography on his life. In it Cardinal Wojtyla greets Father Witkowski saying in the balloon caption, “Bless you, it is so good to see you again, Father.”

Msgr. Witkowski also chaired the Polish liturgical committee at the Congress and authored a play, “The Miracle of the Bread,” that was presented during the Congress.

“Bernie was always so involved with the Polish people,” remembers Msgr. John Conahan, a seminary classmate who also served with Msgr. Witkowski on the Cardinal O’Hara faculty and the two were best of friends for more than half a century.

“His family was my family,” Msgr. Conahan said. “He gave me the strength to do things I didn’t think I could do.”

Just one example, “Bernie was an athlete. I think he played every sport except the horses,” Msgr. Conahan recalled. “I always wanted to be an athlete but never could be. When the chance came up at O’Hara to be athletic director I wanted it but didn’t want to try for it. He said, ‘Go for it, you’ll love it.’ I did.”

“Monsignor Witkowski devoted his whole life to promoting Polish heritage,” said Michael Blichasz, president of Philadelphia’s Polish American Heritage Center. “His idea was America is not a melting pot, it is a mosaic, and that’s something that makes it outstanding as a nation.”

He also had great concern for the elderly, the poor and the unemployed, according to Blichasz, and tried to make the church their contact.

“He always talked about having faith and he was devoted to Our Lady of Czestochowa and said when you lose your faith you lose your ability to communicate,” Blichasz added.

There will be a viewing for Msgr. Witkowski starting at 9 a.m. on Wednesday, June 22, at St. Adalbert, his childhood parish. It will be followed by his 11 a.m. funeral Mass celebrated by Bishop Michael J. Fitzgerald. Concelebrants will include Msgr. Daniel Sullivan, Fathers Jason Kulczynski and Jan Palkowski and Msgr. Conahan, who will be the homilist.

Msgr. Witkowski is survived by his brother, Dr. Casimer Witkowski, his sister, Antoinette McCole, his sister-in-law, Dr. Barbara Witkowski and many nieces and nephews.

Interment will be at Holy Redeemer Cemetery, Philadelphia.