Gordie Howe, ‘Mr. Hockey,’ recalled as tough on the ice, generous off it 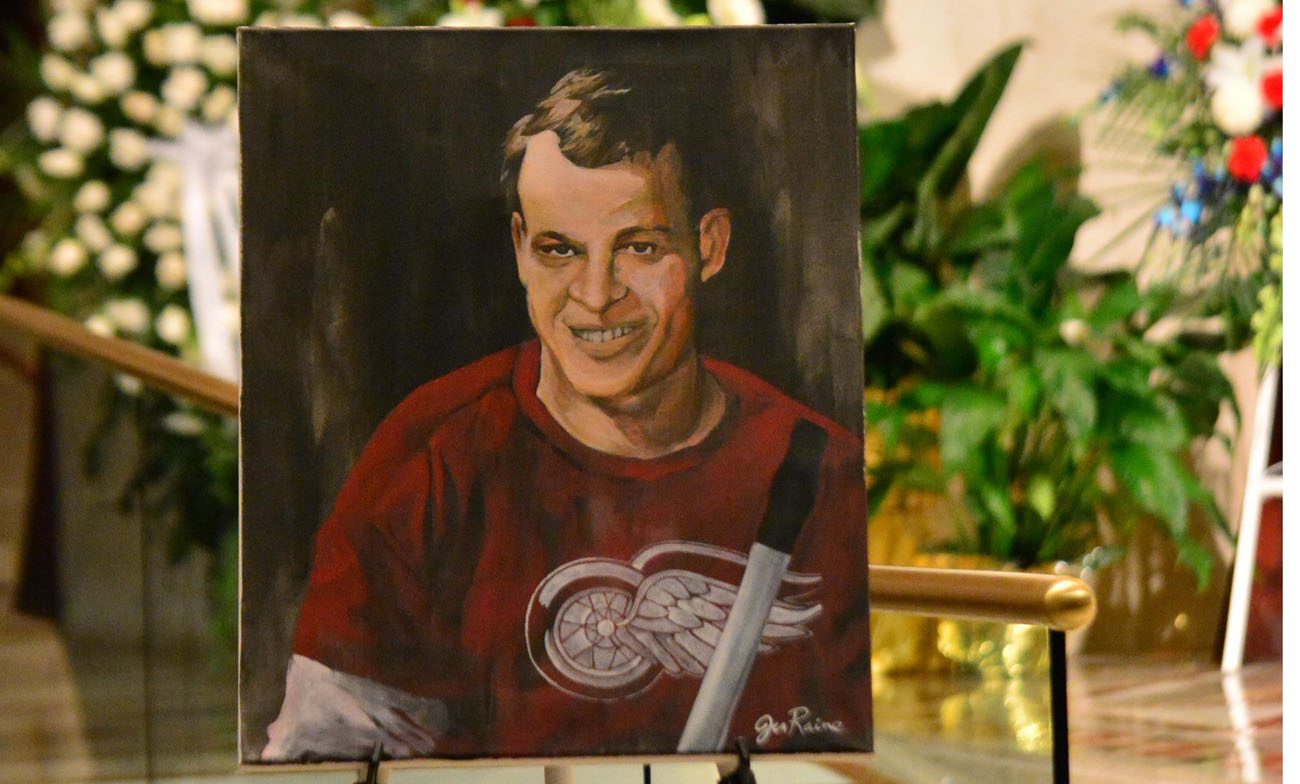 A portrait of Detroit Red Wings great Gordie Howe is displayed next to his casket June 15 inside the Cathedral of the Most Blessed Sacrament in Detroit. Howe, the man forever known as "Mr. Hockey," died June 10 at age 88.(CNS photo/Mike Stechschulte, The Michigan Catholic)

DETROIT (CNS) — Family, friends and fans crowded into the Cathedral of the Most Blessed Sacrament June 15 to pay tribute to the life of “Mr. Hockey,” Detroit Red Wings legend Gordie Howe.

Howe, a hockey Hall of Famer and one of the most celebrated athletes of his generation, died June 10 at the age of 88.

Howe’s casket, decorated with red and white flowers — Red Wings colors — was placed in front of the altar during the Mass next to a picture of the late Hall of Famer, as the cathedral choir sang traditional hymns.

While Howe’s prowess and toughness on the ice was well-documented, it was his generosity and selflessness off it that touched mourners.

Dr. Murray Howe, who gave a eulogy for his father before the Mass, recalled that “Mr. Hockey” always had time for everyone, no matter where he was.

“Dad was upright. He believed in being compassionate, respectful and using good manners, but also standing up for what is right. He tried to instill those traits in all those who were around, especially kids,” Murray Howe said.

“If a fan told him a story, he would not interrupt, no matter how long they spoke. He would not correct them, even if they insisted they watched him play in the summer Olympics in 1906,” he said to laughter.

Although Gordie Howe “did not lead the league in church attendance,” his son said, “his life was the epitome of the faithful servant.”

“Jesus tells us, ‘Whatever you did for the least of my brothers, you did to me.’ ‘Mr. Hockey’ loved God, but he loved everyone,” Murray Howe said.

Though Gordie Howe was not Catholic, he would always respond generously whenever asked to help — and sometimes even when he wasn’t — said cathedral rector Father J.J. Mech, a longtime friend of the Howe family who celebrated the memorial Mass at the family’s request.

“Gordie loved to help,” Father Mech said in his homily. “He loved to be busy. In recent years, he was taking turns living with all the kids, rotating around, and they’d wake up and he wasn’t there. He was raking the neighbor’s lawn. You couldn’t stop him.”

“He really lived what Jesus taught. He may not have been someone who talked about the Scriptures and all of that, but he lived it,” said Emrick, a southeast Michigan native. “Most people, I think, when this happens, they don’t want to hear about it as much as they want to see it. And if they see it, then they believe it.”

Emrick painted a picture of Howe’s graciousness, saying if there were a map of the United States with a red dot for every fan whose hand he shook, “you would see lights in every state and enormous concentrations of them,” Emrick said. “He met so many people in his lifetime and he was good to all of them.”

Many of those fans found a seat inside the cathedral, with a handful donning Red Wings “No. 9” jerseys. Christine Wofford, a lifelong Red Wings fan who attended the Mass, carried a large cutout of Howe’s famed jersey number.

Wofford was pleased to hear stories of the hockey legend’s approachableness and friendly demeanor.

“I’m really floored by finding out what he really was like. I didn’t know he was such a people person,” Wofford said. “That’s just comforting to hear how much he loved his fans and the kids. He’s just a wonderful person.”

Howe was known throughout the Detroit area as being generous with his time and talents, said Deacon Bill Jamieson of St. Paul on the Lake Parish in Grosse Pointe Farms. Deacon Jamieson, who from 1982 to 1996 worked as public relations director for the Red Wings, said Gordie needed no instruction when it came to being charitable.

“He was always available when we’d do a charity event, and he didn’t need much guidance,” said Deacon Jamieson, who in 2009 assisted at the funeral of Gordie’s wife, Colleen. “I’d just try to step back and watch, and I was allegedly the coordinator.”

Of course, Howe wasn’t always as pleasant to the players he played against, but that was part of his persona, too.

Gretzky, the NHL’s all-time leading scorer who grew up watching Howe skate circles around opponents in the late 1960s, used to write book reports on Gordie in school.

“I wasn’t a great student, but the only time I ever got an ‘A’ on a book report is because I read a Gordie Howe book,” Gretzky told reporters after the Mass. “That was my life. I knew everything about him. He’s a wonderful man, and my gosh, the world’s not as good a place today as it was the other day when he was here.”

Gretzky said Howe was responsible for putting hockey on the map in the United States, crediting Mr. Hockey with inspiring one of the Motor City’s many nicknames.

“‘Hockeytown, USA,’ in Detroit is because of Gordie Howe,” Gretzky said. “Before Gordie got to Detroit, it was the Toronto Maple Leafs and Montreal Canadiens. Hockey was Canada. Gordie Howe put his foot in the door in the late ’40s and early ’50s, and young kids in the United States started saying ‘I want to be a hockey player.'”

NEXT: Catholic team steps up for final game in Phillies-sponsored tourney