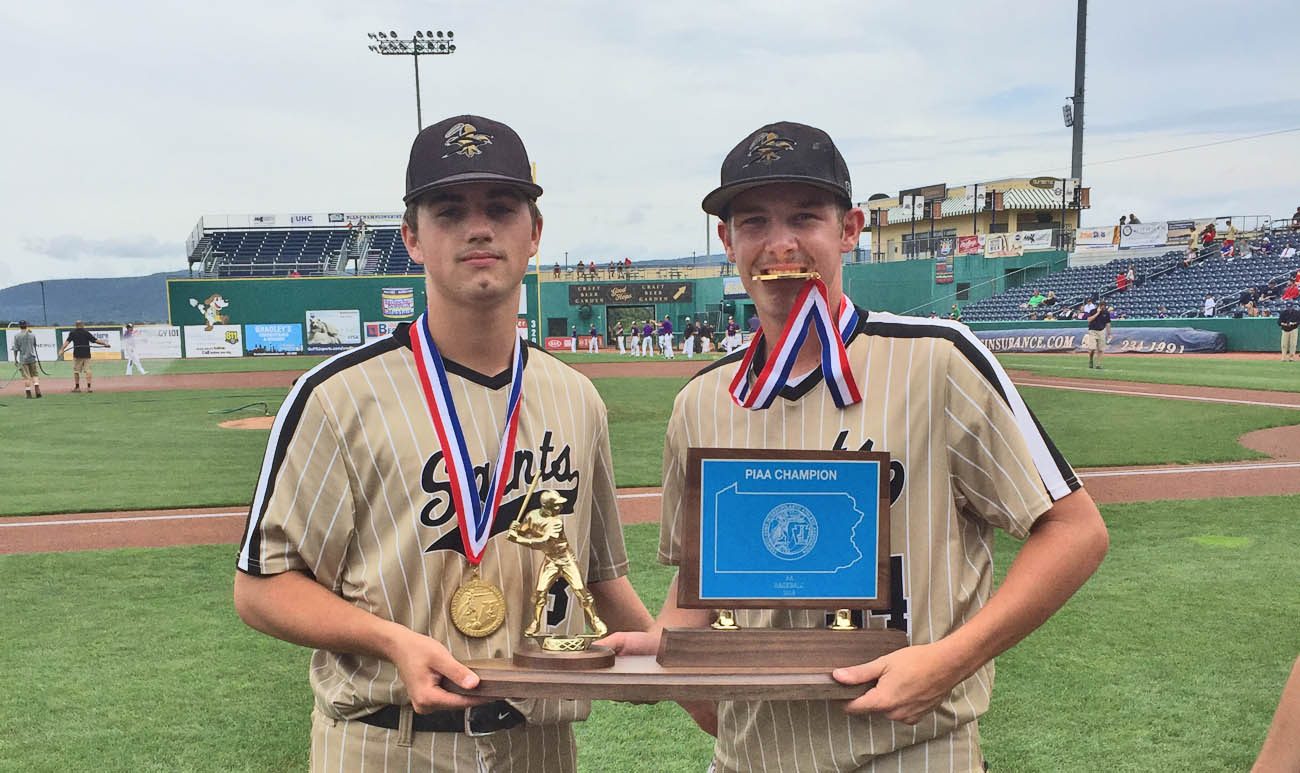 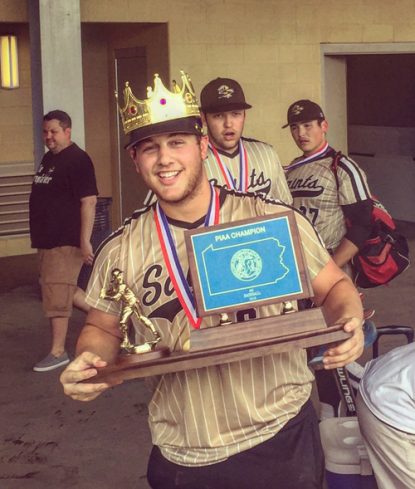 Senior first baseman Lou Testa, who recorded the final out of the season for the championship, knows it’s good to be the kings of the PIAA’s class AA division. (John Knebels)

Much has been written about how Neumann-Goretti’s baseball team started the season by losing four of its first seven games. What wasn’t mentioned is that in most of those defeats, the Saints were a hit away from turning a loss into a win.

On Thursday afternoon, June 16 at Penn State University, nothing could provide an obstacle for the newly crowned Pennsylvania PIAA Class AA state champions. Not Bishop McCort High School, the top seed of District 6. Nor an approximate two-hour rain delay halfway through the contest.

For seven innings, Neumann-Goretti did what it has done throughout the postseason — pitch great, field well and receive opportunistic offensive contributions. That lethal combination served as a 3-0 victory and the school’s first-ever baseball state championship.

For the academic year, the Saints finished with three state titles, having already accrued boys’ and girls’ basketball championships.

“It doesn’t get any better than this,” said Neumann-Goretti Coach Kevin Schneider. “It’s the most satisfying year in my coaching career. Up and down, so many players made this happen.”
On the hill for the Saints was senior Ethan Pritchett.

Although struggling with his control to the tune of five walks, Pritchett struck out eight and allowed only three hits. He finished the season with 26 consecutive shutout innings. As a staff, the Saints captured their last three wins via shutout and allowed a measly one run in the postseason. No team has ever had such a low earned-run average — 0.63 — in the history of the PIAA state playoffs.

“With our pitching, we have a lot of confidence no matter what the score,” said sophomore R.J. McGettigan, an outfielder who hit a team-leading .400 and drove in a club-best eight runs during the playoffs. “When you feel that confident, it is hard to describe how much that helps.”

Despite the pressure-packed moment, Pritchett said he was not nervous.

“I have been wanting to be in this game since last year,” said Pritchett, referring to last year’s 9-0 defeat in the state championship. “There was nothing that was going to stop us.” 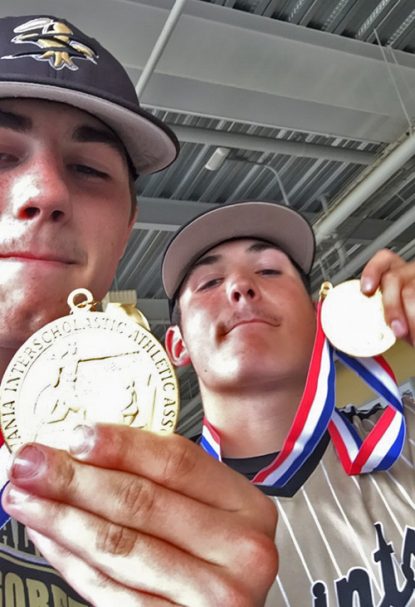 As he has done so many times during the last chapter of his scholastic career, senior Brian Verratti chipped in with a crucial hit. His two run triple in the fifth inning turned a tenuous 1-0 edge into a larger-than-it-looked 3-0 advantage. All that was left was for Pritchett to nail down the usually hard-hitting, 22-6 McCort lineup.

On the last play of the game and season, a come-backer to the mound was snared by a leaping Pritchett. He then took a couple of steps and underhanded to first baseman senior Lou Testa, and the 2016 state baseball championship belonged to the ecstatic guys wearing the white, black and Vegas gold.

“It was a great feeling,” said Testa. “It’s something I will always remember.”

One of the more impressive aspects of Neumann-Goretti — winners of 13 straight and 15 of its last 16 for a final mark of 20-6 — was its mix of youth and experience. Included in the underclassmen-laden starting lineup was freshman catcher Eric Nardini, who caught every pitch of the season.

McGettigan said that being a sophomore did not translate into feeling upstaged.

“All it came down to was winning it all and doing it for the guy next,” said McGettigan. “That’s what we are about. The older players always help the younger ones. I think it is fair to say that everybody feels the same no matter what grade they are in.”

PREVIOUS: Banged up and tired, Catholic teams still grinding it out for a title

NEXT: Gordie Howe, ‘Mr. Hockey,’ recalled as tough on the ice, generous off it