Saints find a way to win, even when they don’t hit 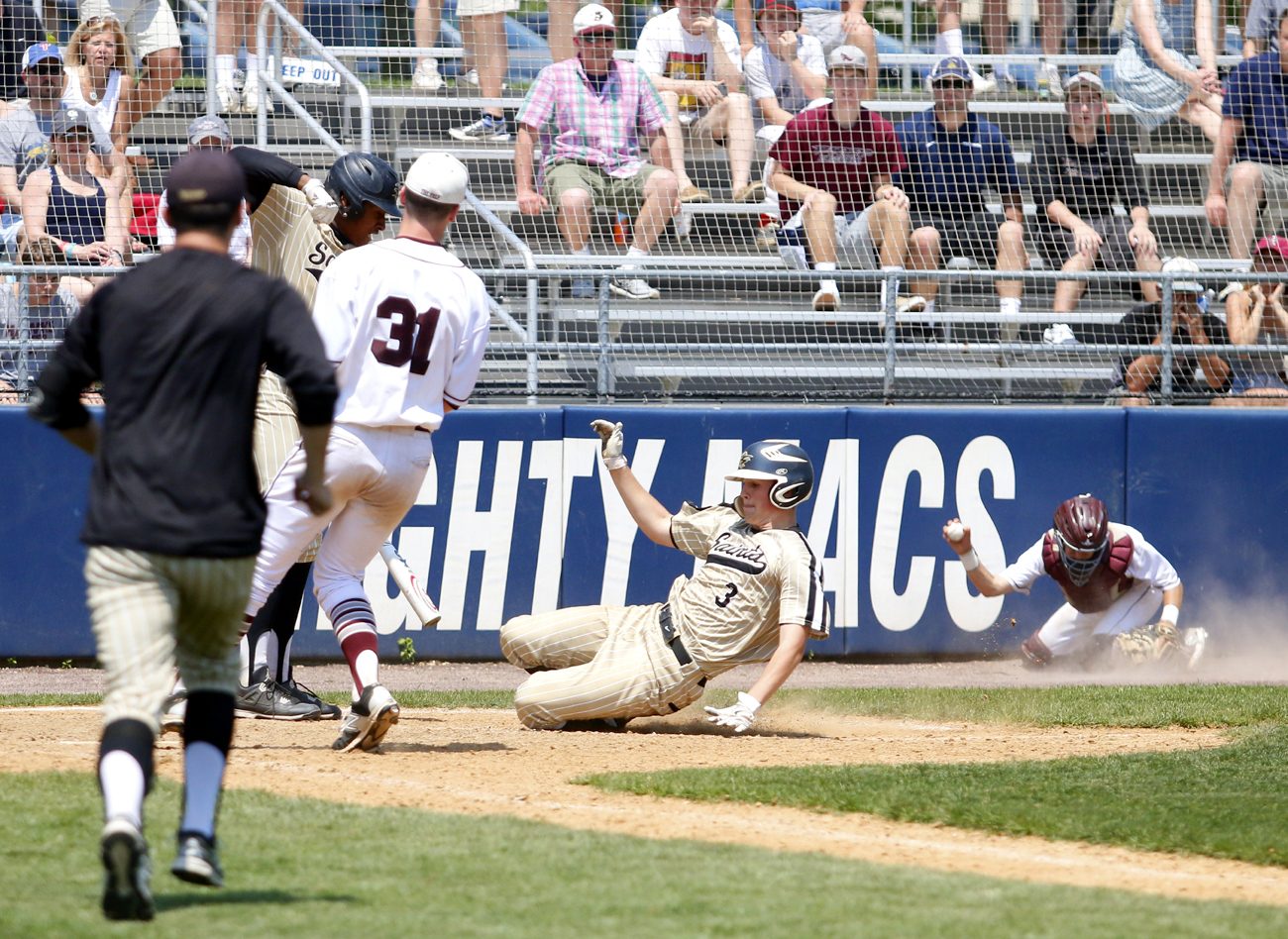 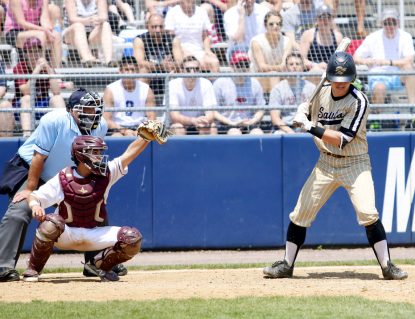 A high pitch leads to a walk for Neumann-Goretti during the bottom of the seventh inning and eventually two runs and the win for the Saints. (Sarah Webb)

In the early portion of non-league baseball competition this spring, Neumann-Goretti was leading Episcopal Academy by six runs en route to a blowout victory.

Despite leading by six runs, the Saints were being no-hit.

“Put pressure on the other team,” N-G coach Kevin Schneider said after the game. “Whatever you can do, try to force the issue with anything and everything you can find.”

On May 28 at Immaculata University, Neumann-Goretti defeated St. Joseph’s Prep, 3-2, and captured the Catholic League championship, the school’s fifth in the past eight years. The dramatic ending was symbolic of Neumann-Goretti’s season.

(View a photo gallery with scenes from the game and its dramatic finish, here.)

“We win all kinds of ways,” said Schneider. “We try to always put pressure on the other team any way we can. We don’t have the the kind of team where we can rely on home runs, so we try to do other things to score runs.”

The Saints readily admitted that their victory was largely due to a Prep meltdown. With the Prep leading, 2-1, in the bottom of the seventh, senior Nick D’Amore led off with a walk – the first freebie of the day and only the third base runner (one walk and one error) allowed by junior Prep pitcher Colin Scanlon. Junior Jarred Healey’s subsequent sacrifice bunt attempt was bobbled for an error, putting runners on first and second.

After sophomore Aiden Baur’s bunt attempt resulted in a force out at third, senior Lou Testa walked to load the bases. With Neumann-Goretti’s dugout breaking the decibel record for loud cheering, sophomore Joe LaFiora was plunked by a pitch that scored Healey with the tying run.

With senior Ethan Pritchett at bat, a wild pitch enabled Baur to race home with the winning tally. So, in summary, the Saints scored two runs without even reaching the pitcher’s mound with a single swing.

“We never stopped believing,” said sophomore reserve R.J. McGettigan. “We were down by a run but we believed we would get it back in the last inning. It’s not hard to believe in our team. As long as we are determined, we’re alright. Like today. These guys came too far to lose.”

Heading into the post-season, Neumann-Goretti (7-5 regular season, fifth seed) and the Prep (6-6, seventh) were both underdogs. For the first time in Catholic League history, all four underdogs had forged victories in the quarterfinals, with the Prep stunning second-seed Archbishop Wood, 6-4, while Neumann-Goretti ousted fourth-seed Roman Catholic, 2-1, in a rain-shortened affair. In the semifinals, St. Joseph’s Prep defeated Cardinal O’Hara, 14-9; N-G toppled Bonner-Prendergast, 9-3.

In the championship, the first inning was largely like the first, with the Saints taking advantage of several Hawk miscues. In the top half, the Prep had runners on first and third with one out, and a pop fly resulted in a single, but the runner on third froze – perhaps blocked by a converging infielder and outfielder – and the Hawks ended up getting nothing across after the next two players struck out.

In the bottom of the first, the Saints took a 1-0 lead on a dropped pop up between the pitcher’s mound and home plate, a sacrifice bunt and a sacrifice fly by D’Amore.

It remained that way until the Hawks plated two runs in the top of the fifth inning, highlighted by senior Keith Flaherty’s run-scoring drive to left field that was dropped – it arguably could have been scored a double – and a grounder to first base by junior Jeff Manto that brought home senior John Coppola with the lead run.

“It wasn’t where we wanted to be,” said Testa. “We played like we were pressing in the beginning, but we settled down. I had a feeling we we would win all along.”

Despite the loss, the Prep’s Flaherty elected to view the season as three-quarters full.

“Getting here was great, especially the way we played down the stretch,” said Flaherty, who was a teammate of several Neumann-Goretti players in club ball. “I wanted us to win, but we still had a great season. I’m happy for those guys. They had a great season and deserved to win.”

The Saints began the spring with a record of 1-3 in the league and 2-5 overall, but three of those losses were by one run and another was by two runs. In other words, their record was misleading. Still, the Saints learned how to improvise offensively, and in many ways, their win over the Prep in the final reflected that.

“It doesn’t matter how you win, just as long as you do,” said Baur.

Baur provided a reason why baseball is considered such a great game. One never knows when his moment – for good or for bad – will arrive. His three at bats included two strikeouts and a flubbed sacrifice bunt attempt. And yet, he ended up scoring the winning run on the strength of both smarts and hustle.

“Definitely not the kind of game I wanted to play,” he said, “but with the way it turned out, I’ll take it every time.”

For the Prep, it was a bitter defeat. Sandwiched between disastrous first and seventh innings was inspiring baseball, particularly at pitching and on defense.

In the end, however, Neumann-Goretti’s penchant for finding ways to win once again overcame the odds.

A championship plaque in South Philadelphia proves it. 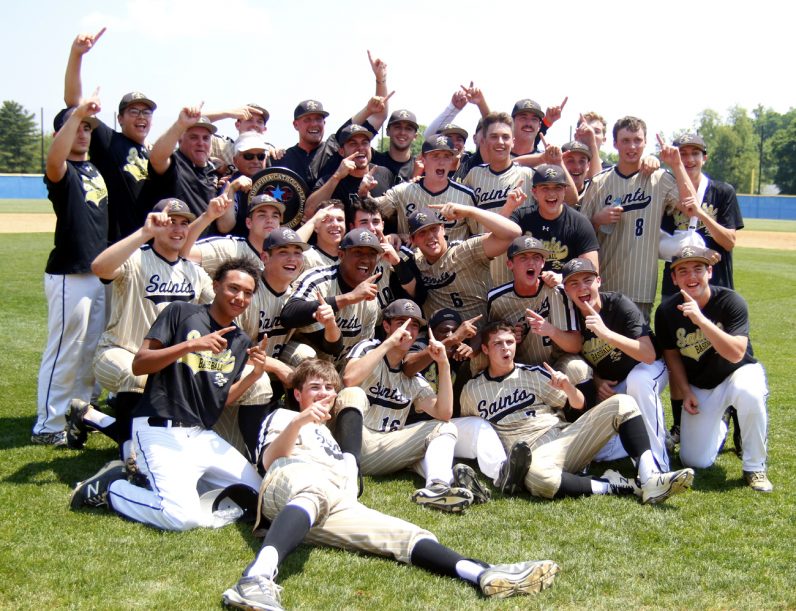 The Neumann-Goretti baseball team celebrates the Catholic League title victory. It was the Saints’ fifth league title in the past eight years. (Sarah Webb)

NEXT: Banged up and tired, Catholic teams still grinding it out for a title