Marian apparitions: Determining what is ‘worthy of belief’ 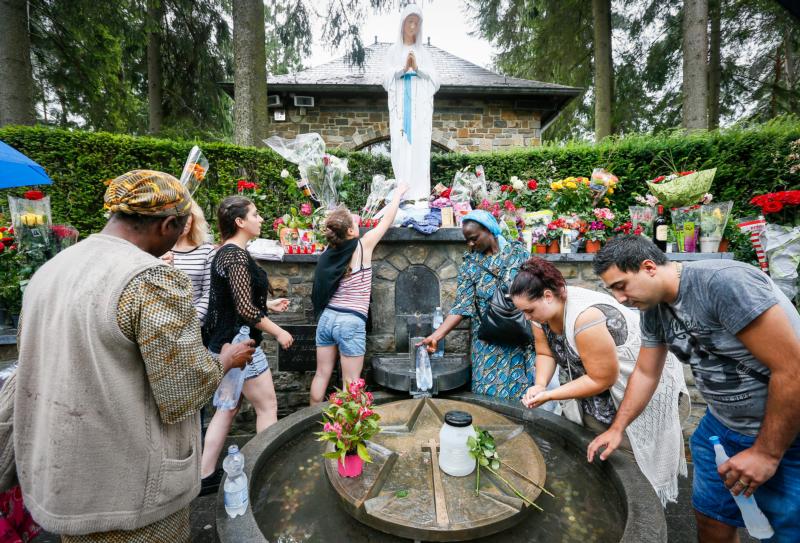 Pilgrims visit a shrine to Mary in Banneux, Belgium, Aug. 15, the spot where an 11-year-old girl said Mary appeared to her eight times in 1933 as the "Virgin of the Poor," officially recognized by the Vatican in 1949. Mary's appearances may be unexpected, but her message is not -- that penance and prayer are powerful antidotes to evil. (CNS photo/Julien Warnand, EPA)

A recent case involving alleged Marian apparitions in the Philippines — which the Vatican effectively denied as “supernatural,” after a local archbishop had declared them “worthy of belief” — reflects the centuries-old caution with which the church regards reported appearances, real or imagined, by Mary, the mother of Jesus.

Over the past 500 years, the number of reported Marian apparitions is somewhere in the thousands, although the Vatican has authenticated fewer than 20. Such a wide gap indicates how the official church exercises not just caution but vigorous detective work in its investigations.

And that’s understandable, since church leadership is acutely aware of its own people’s desire to find tangible signs of faith, but also mindful of the skepticism, cynicism and even scorn that many inside and outside the church hold for “supernatural” phenomena, including that connected to religious belief.

So it can take decades, even centuries, to reach a decision — some 300 years, for example, for the church to approve the apparitions of Our Lady of Laus in France that took place between 1664 and 1718. By comparison, the approval by Bishop David L. Ricken of Green Bay in 2010 of a series of Marian apparitions that occurred during 1859 in Champion, Wisconsin — the first time apparitions in the U.S. received official approval — happened in the blink of an eye.

The church is also well aware of human nature, and specifically the longing many have to be close to Mary, as indicated in the “lineamenta” (or preliminary document) of the 1997 special assembly of the Synod of Bishops for America.

“Within the church community,” the document noted, “the multiplication of supposed ‘apparitions’ or ‘visions’ is sowing confusion and reveals a certain lack of a solid basis to the faith and Christian life among her members. On the other hand, these negative aspects in their own way reveal a certain thirst for spiritual things which, if they are properly channeled, can be the point of departure for a conversion to faith in Christ” (No. 33).

Four years ago, the Vatican translated and published procedural rules approved by Pope Paul VI in 1978 that had previously been available only in Latin. “Norms Regarding the Manner of Proceeding in the Discernment of Presumed Apparitions or Revelations” was published to help bishops determine the credibility of alleged Marian apparitions.

The process of verifying apparitions — like that of beatifying and canonizing saints — is generally long, meticulous and sometimes contentious, beginning with the local bishop.

In 1555, Archbishop Alonso de Montufar of Mexico approved the vision of Mary as reported by St. Juan Diego in 1531, on Tepeyac hill in Mexico.

And on Sept. 12, 2015, Archbishop Ramon C. Arguelles of Lipa, Philippines, stated that the alleged 1948 appearance of Mary 19 times to a novice in the Carmelite order in Lipa City had, in fact, exhibited “supernatural character and is worthy of belief.”

A few months later, however, the Congregation for the Doctrine of the Faith nullified the declaration of Archbishop Arguelles.

And 35 years after six young people first reported seeing Mary appear in Medjugorje, Bosnia-Herzegovina, the Holy See has not reached a final decision on their authenticity, even as droves of pilgrims journey to the site annually, and several of the young “visionaries” give presentations around the world.

The church’s official position on Medjugorje, stated in 1990 by the Yugoslavian bishops’ conference at Zagreb, and reiterated most recently in 2013, is: “On the basis of studies made to this moment, it cannot be confirmed that supernatural apparitions and revelations are occurring here.”

Yet, the bishops added, “the gathering of the faithful from various parts of the world to Medjugorje, inspired by reasons of faith, requires the pastoral attention and care of the bishops … so that a proper liturgical and sacramental life may be promoted, and so manifestations and contents which are not in accord with the spirit of the church may be prevented and hindered.”

The Catechism of the Catholic Church, while not using the term “Marian apparitions” explicitly, nonetheless points out that, “even if revelation is already complete, it has not been made completely explicit; it remains for Christian faith gradually to grasp its full significance over the course of the centuries” (No. 66).

Acknowledging that some “so-called ‘private’ revelations, some of which have been recognized by the authority of the church,” the catechism adds quickly, “They do not belong … to the deposit of faith. It is not their role to improve or complete Christ’s definitive revelation, but to help live more fully by it in a certain period of history. Guided by the magisterium of the church, the “sensus fidelium” knows how to discern and welcome in these revelations whatever constitutes an authentic call of Christ or his saints to the church” (No. 67).

Which is why there is a process for investigating, reviewing and approving or disapproving Marian apparitions — a process ultimately aimed at nurturing a healthy spirituality and belief among all of God’s people.

Nelson is former editor of The Tidings, newspaper of the Archdiocese of Los Angeles.

PREVIOUS: Devotion to Mary stems from earliest days of the church

NEXT: Reader confesses to missing the Confiteor at Mass