Devotion to Mary stems from earliest days of the church 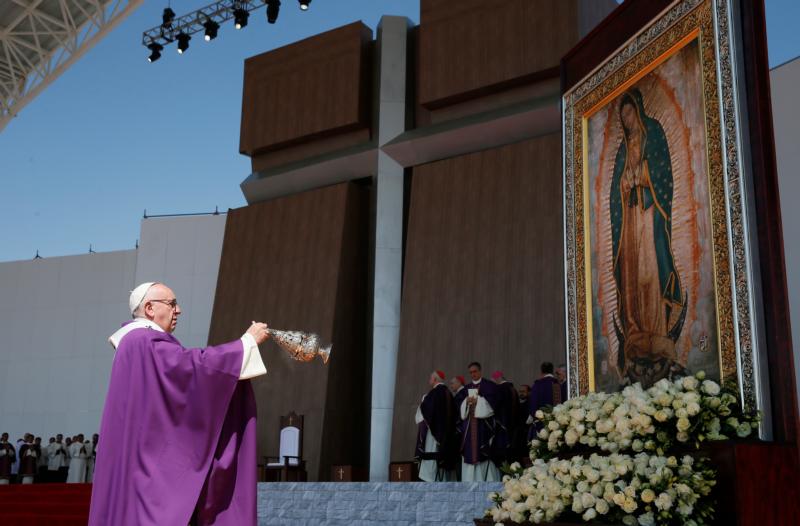 Pope Francis uses incense to venerate an image of Our Lady of Guadalupe during Mass in Ecatepec near Mexico City Feb. 14. While the church has rejected the legitimacy of some Marian appearances, it has not made judgment on most of them. Some appearances, however, have been recognized by the church as legitimate, including those at Guadalupe, Mexico, in 1531; Siluva, Lithuania, in 1608; the appearance to St. Catherine Laboure in Paris in 1830. (CNS photo/Paul Haring)

The important role that Mary, the mother of Jesus, plays in the salvation of the world has been recognized by the church from its earliest days. And since those earliest days a cult of devotion to Mary has developed to give her honor and praise, and to recognize her role as the Mother of God, a title bestowed on her by the Council of Ephesus in 491.

The Second Vatican Council’s Dogmatic Constitution on the Church (“Lumen Gentium”) says that Mary is “justly honored” by this cult (No. 66).

Over the centuries, Mary has reportedly appeared to numerous people in countries all over the world. While the church has rejected the legitimacy of some Marian appearances, it has not made judgment on most of them.

Some appearances, however, have been recognized by the church as legitimate, including those at Tepeyac, Mexico, in 1531; Siluva, Lithuania, in 1608; the appearance to St. Catherine Laboure in Paris in 1830; and those in Lourdes, France, in 1858 and Fatima, Portugal, in 1917.

The appearance of Our Lady to Adele Brise in Champion, Wisconsin, in 1859 was officially recognized by Bishop David L. Ricken of the Diocese of Green Bay in 2010 and proclaimed “worthy of belief” under the title Our Lady of Good Help.

All Marian apparitions fall into the category of private revelations, meaning that the faithful are not required to believe in them, even those apparitions recognized by the church as valid. Private revelations are considered to be inspirational messages that encourage Christians to live so as to draw closer to Christ.

The Directory on Popular Piety and the Liturgy issued by the Congregation for Divine Worship and the Sacraments in December 2001 establishes guidelines for how Catholics should appropriately honor Mary.

It notes that devotion of Mary “is an important and universal” phenomenon throughout the church, throughout its history and across the world. Christians are encouraged “to develop a personal and community devotion” to Mary (No. 183).

All Marian devotions should “give expression” to the Trinity, meaning that Marian apparitions help us to better understand the love that exists with the Holy Trinity — Father, Son and Holy Spirit.

Apparitions also should be rooted solidly within the tradition of the church and be compatible with the church’s profession of faith as expressed in ecumenical dialogues. They also are to reflect a true concept of humankind and present a “valid response” to our needs.

Finally, these apparitions are to be missionary in tone and spirit. They are to encourage the Christian faithful to bear witness to the saving message of Jesus, as is appropriate for those who are disciples of the Lord (No. 186).

PREVIOUS: Miraculous Medal reminds us to stay close to Jesus

NEXT: Marian apparitions: Determining what is ‘worthy of belief’