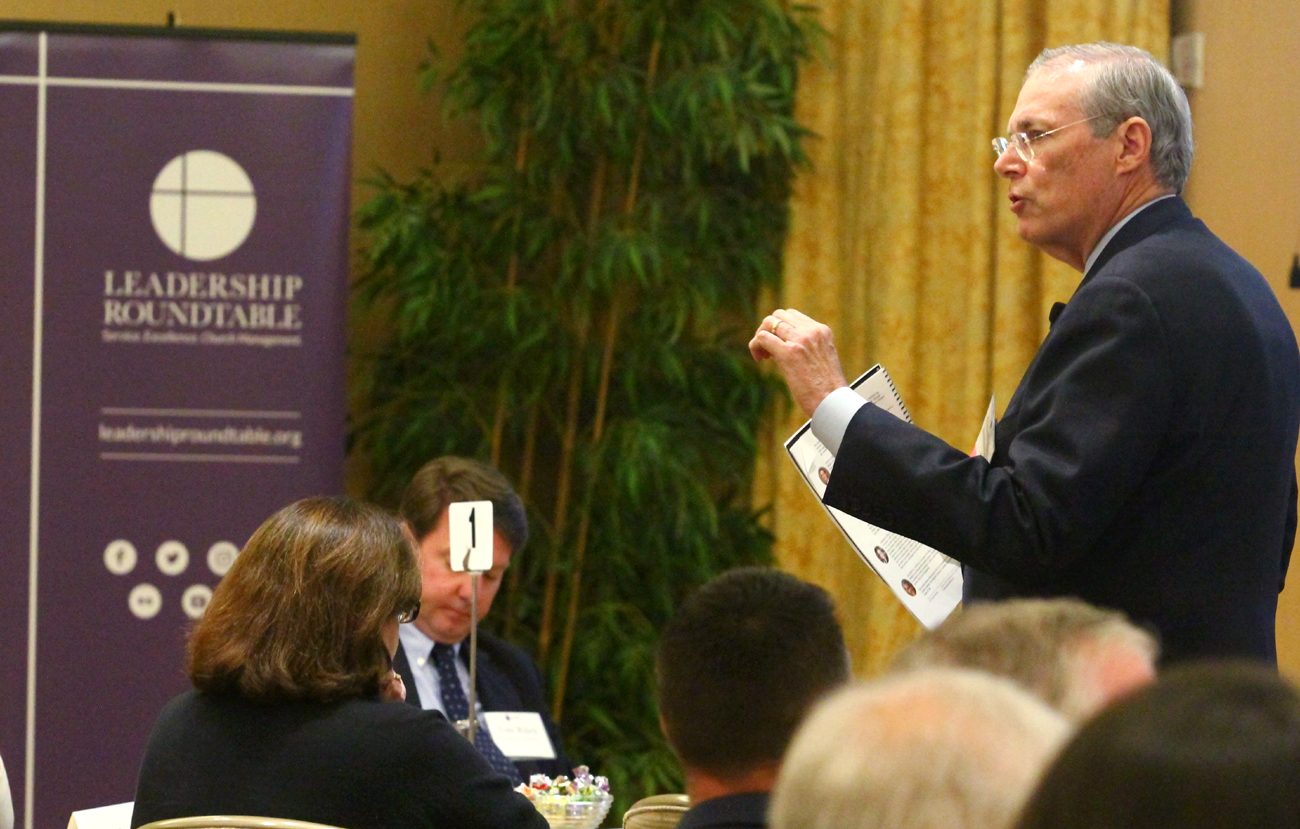 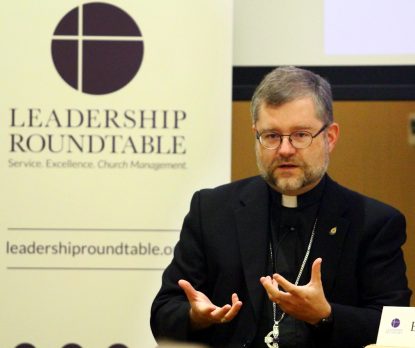 Auxiliary Bishop Thomas Dowd of the Archdiocese of Montreal speaks on what his archdiocese has learned by changing its managerial practices. (Sarah Webb)

When the Leadership Roundtable held its annual meeting with 67 participants at Philadelphia’s Inn at Penn on June 30, it took as its theme “The Francis Effect and Transforming Church Culture: Advancing Best Managerial and Leadership Practices.”

Appropriately enough, one of the first discussions started at the top — the initiative by Pope Francis to reform Vatican business practices in the wake of financial scandals through the appointment of Australian Cardinal George Pell as prefect of the Secretariat for the Economy with a mandate to reform the system.

Addressing the issue through a televised link from Rome was Danny Casey, a CPA who was business manager for the Archdiocese of Sydney when Cardinal Pell was the archbishop there, and who now assists him at the Vatican.

Casey insists the church should adhere to the same business practices that are expected of institutions and governments worldwide.

“We are entrusted with a patrimony that is not our own,” he said. “The church is eternal. We actually inherited much from the people who came before us and they are watching. If we don’t do good today we are compromising the work of the people who follow us.”

He told the story of one meeting with Vatican officials when he was preaching the Gospel of accountability, with everything, including income and expenses, on the books.

“Everything? What about what we do in cash?” one official asked. “How much do you do in cash?” Casey inquired. “About 90 percent,” was the reply.

“It didn’t mean there was wrongdoing, but there were no controls and it had to stop,” Casey said.

Another panelist was Elizabeth McCaul, partner-in-charge of the New York office of Promontory Financial Group, a regulatory compliance firm and also a former superintendent of banks for the state of New York and former chair of the Conference of State Bank Supervisors, among other accomplishments. She went to Rome to assist Cardinal Pell and Casey in compliance matters.

“When the papal conclave was held in 2013 there was a real crisis in the church and it was caused by a lack of transparency, a lack of controls and a lack of adherence to international regulatory practices that create confidence,” she said.

Almost immediately after the Holy Father was elected he identified financial reform as a top priority. It was no accident because the reforms are all about doing the work of the church well, so that in the future her good works can continue, McCaul explained. 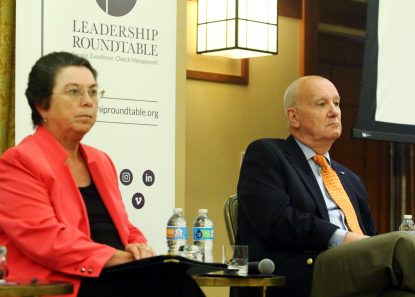 With reforms in place on the issues of transparency, governance, regulatory compliance and sustainability, “the days of ripping off the Vatican are over,” she said.

Good financial practices are just one of the concerns of the Leadership Roundtable, which was founded in 2005 originally to assist the U.S. bishops in response to the child sex abuse scandal, according to the founding chair, Geoffrey Boisi, a retired vice chairman of JPMorgan Chase.

“My expertise as a lay person was on the temporal side,” he said. “If you get that correct, as you lead to healthy governance management, human resources development, financials and communications, you can avoid a lot of problems. We brought together leaders from all walks of life to focus on developing best practices to help the church in its work. I think we have made a lot of progress.”

Another speaker was Bishop Thomas Dowd, an auxiliary bishop for the Archdiocese of Montreal whose primary responsibility is oversight and ministry of the English-speaking parishes in his overwhelmingly French-speaking diocese. He also happens to have a degree in international business and finance.

On becoming a bishop he made it his custom to make pastoral visits to the parishes not just to celebrate Mass but to live in them for an entire week, meeting with all of the parish groups, getting to understand their concerns.

“Investing in human relations, getting to know the people, telling them what I observed so we can be on the same wave-length is important,” he said. “You don’t sell the Kingdom of God by business administration.”

He also required all of the priests in the parishes to give him their personal email, so if he had something important to discuss it wouldn’t be lost among the many messages sent to the parish.

Collaboration with the people is very important, he believes, and in a way, Montreal is unique in this respect. It is probably the only diocese in North America where the parish properties are almost always owned by the bishop as a corporation sole and passed on to his successors, Bishop Dowd explained.

Tracing back to Montreal’s colonial roots, each parish has its own elected board of directors which controls temporal matters and cannot be overruled by the pastor or bishop, although spiritual matters, including appointment of the clergy and staff, are under diocesan control.

“They can’t sell the church without going to the bishop, but they are gatekeepers elected by their peers at a parish meeting,” he said. “The only way it works is by establishing a common mission under a relationship of trust.”

Barbara Anne Cusack, a canon lawyer and chancellor of the Archdiocese of Milwaukee, believes that in the decision-making process for a diocese it should not be just clerics sitting around the table.

“Are people there because of position or because of expertise?” she asked. She agrees that in the end the bishop is the decision maker, but the others at the table may be decision shapers. “There should be a team approach,” she said.

Jim Herrell, a parish administrator at St. Ann’s, a dynamic and growing parish in Marietta, Georgia, believes “leadership management principles can improve the parish’s ability to meet its mission.” In his view the laity are no longer collaborators, they are co-responsible for the work of the church.

“Faith is not a spectator sport. It requires us to be involved,” he said. 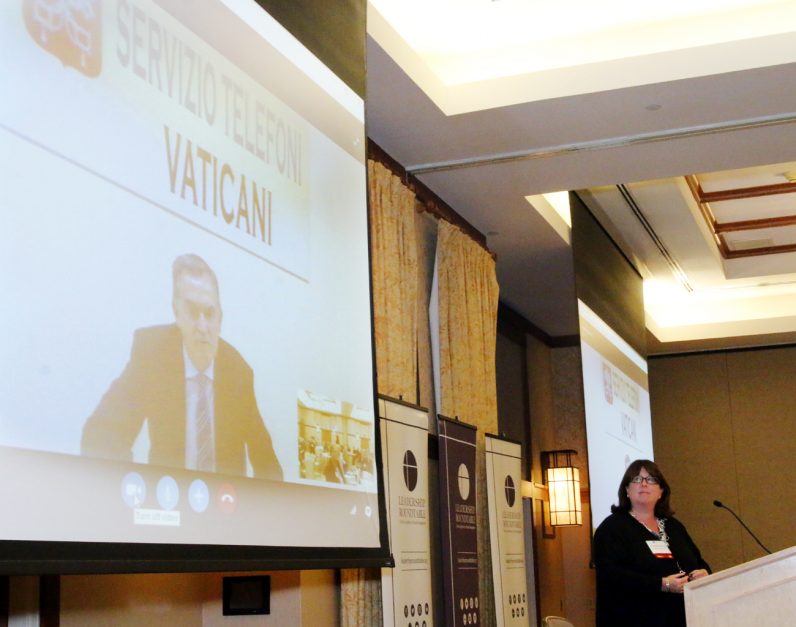 Danny Casey, director of the Office of the Prefect for the Secretary of the Economy at the Vatican, and Elizabeth McCaul, Partner-in-Charge for New York Promontory Financial, discuss “From the Vatican to Washington, D.C.: A Commitment to Management Best Practices and Financial Accountability.” (Sarah Webb)