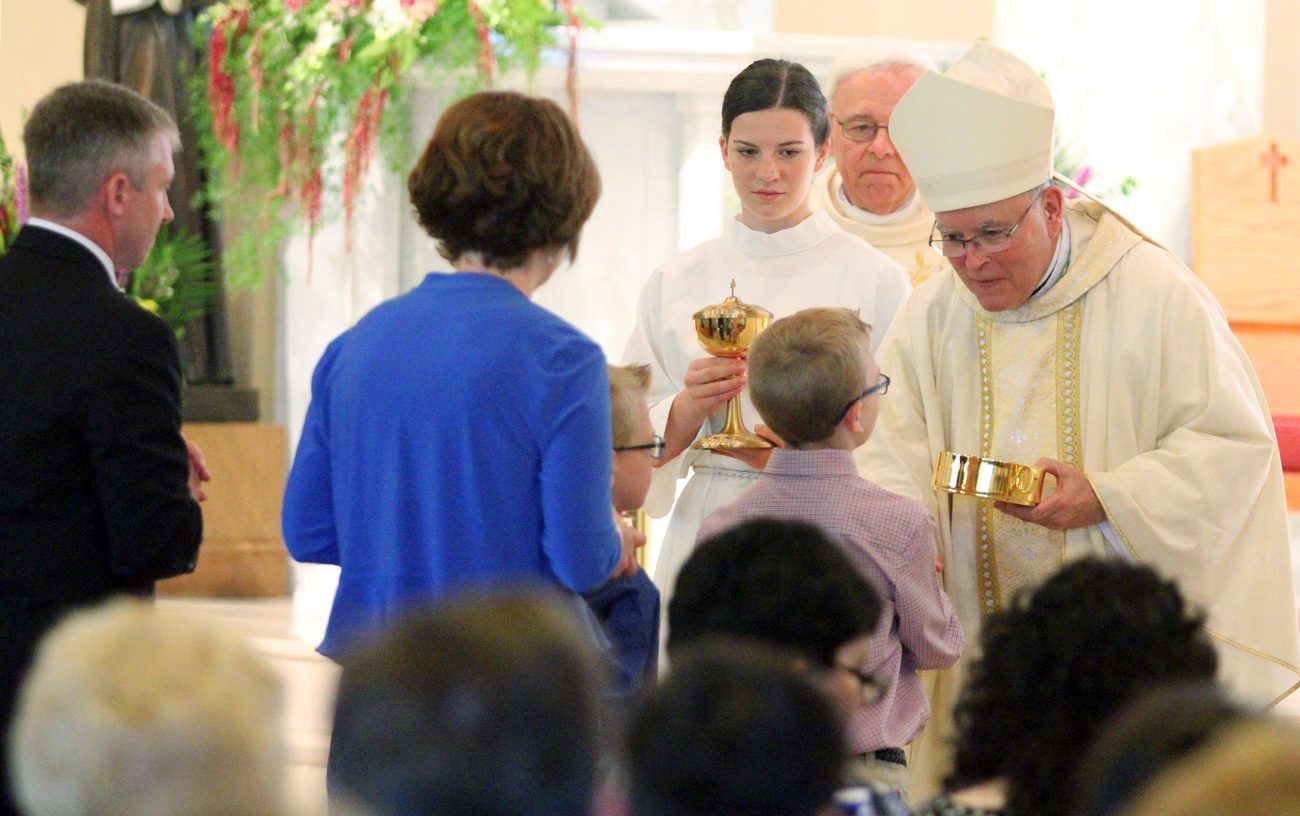 Archbishop Charles Chaput greets a family at St. Bede the Venerable Parish in Holland in this May 2015 file photo. (Sarah Webb)

On the heels of Pope Francis’ document issued this spring on Christian marriage and family life, “Amoris Laetitia” (“The Joy of Love”) the Archdiocese of Philadelphia issued guidelines July 1 for its local implementation.

It is believed to be the first diocese in the United States to do so. Archbishop Charles Chaput, whose name does not appear on the document, chairs a committee of the U.S. Conference of Catholic Bishops studying implementation of Amoris Laetitia in U.S. dioceses.

All priests and deacons received the six-page guidelines as well as seminarians and lay persons who work in marriage preparation and pastoral care “regarding matters of human sexuality,” according to the document. The directives will be reflected in revised marriage preparation materials for the archdiocese over the next year.

(See the thoughts of two priests who have studied the document, here.)

The guidelines cover topics that were the focus of intense debate by two synods of bishops in Rome, in 2014 and 2015, and among Catholics in communities the world over, particularly concerning divorced and remarried Catholics and homosexual Catholics.

Pope Francis has urged that pastors and all Catholics strike a balance between teaching the truths of the permanence of marriage and the dignity of human sexuality with a merciful approach to people in broken marriages or with same-sex attraction.

According to the guidelines, the pope is calling “for a sensitive accompaniment of those with an imperfect grasp of Christian teaching on marriage and family life, who may not be living in accord with Catholic belief, and yet desire to be more fully integrated into church life, including the sacraments of penance and Eucharist.” 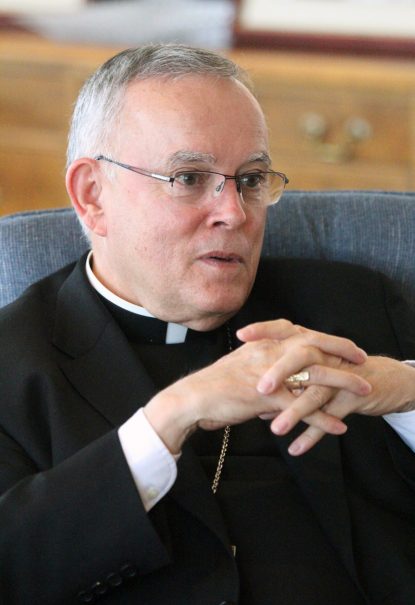 Archbishop Charles Chaput, whose name does not appear on the new archdiocesan guidelines for implementation of Pope Francis’ “Amoris Laetitia,” chairs a group of U.S. bishops studying implementation of the document in U.S. dioceses. (Sarah Webb)

The Philadelphia guidelines frequently use the word “accompany” in stressing that pastors and lay ministers take a sensitive approach in pastoral conversations while emphasizing the ideal of a stable, loving marriage of a couple who are open to bearing and raising children.

But the realities of infidelity, immaturity, marital separation and divorce, often followed by civil remarriage, as well as the experience of homosexual people, call for everyone in the church to support people in their struggles.

While Pope Francis through the synods and Amoris has called the whole church to care lovingly for people in such situations, he also has reaffirmed traditional church teaching on marriage and family life.

In that sense the Philadelphia guidelines present nothing new.

The archdiocese, along with many dioceses around the world, has already made it easier for civilly divorced people to obtain a church annulment. At the pope’s request the fee for the legal paperwork has been waived and the process streamlined to allow for a declaration of nullity to be issued more quickly, in most cases.

Amoris Laetitia presented Catholic teaching broadly and asked bishops to arrange for the “accompaniment of estranged and hurting persons with guidelines that faithfully reflect Catholic belief,” the Philadelphia document states. That is the goal of the guidelines for implementation at the level of parishes and homes.

The ideal of marriage permanence, the reality of brokenness

In addition to emphasizing pastoral care, the guidelines state definitively that “Christian marriage is permanent, monogamous and open to life.”

Couples and their children should be encouraged to pray together and frequently receive the sacraments of penance and Communion, and to find support from Catholic friends and family.

“No Christian family can survive indefinitely without encouragement from other believing families,” the guidelines read. “The Christian community must especially find ways to engage and help families who are burdened by illness, financial setbacks and marital friction.”

But frictions do occur, even to the point of breakage of a marriage. Divorced Catholics can and should receive holy Communion and other sacraments, and the parish community should support them fully, the document says.

“God is faithful to them even when their spouses are not, a truth that fellow Catholics should reinforce,” it reads.

The document’s longest section deals with the complexities of church practice for people who are divorced and do not obtain an annulment before entering a second marriage.

Such remarried couples, and their children, “should be welcomed by the Catholic community,” the guidelines read, and pastors should “ensure that such persons do not consider themselves as ‘outside’ the church.”

‘A hard teaching’ for divorced and remarried Catholics

At the same time, the Catholic remarried individual or couple may not receive Communion. The reason stems from the public character of marriage and Jesus’ teaching against divorce, so that if the first marriage were not declared null, the second marriage would give scandal publicly in the parish community.

And in their home, the couple should refrain from sexual relations, living together if they must for the sake of their children, “as brother and sister.” If they do so, they could receive the sacrament penance as a way to also receiving Communion.

“Where pastors give Communion to divorced and remarried persons trying to live chastely,” the guidelines state, “they should do so in a manner that will avoid giving scandal or implying that Christ’s teaching can be set aside.”

In order to “avoid the unintended appearance of an endorsement of divorce and civil remarriage,” divorced and civilly remarried Catholics cannot serve on a parish council or as liturgical ministers.

“This is a hard teaching for many, but anything less misleads people about the nature of the Eucharist and the Church,” the document says. “The grace of Jesus Christ is more than a pious cliché; it is a real and powerful seed of change in the believing heart.”

While homosexual persons are called to live chastely just as any single or married person is, sexual intimacy is to be shared only within marriage of one man and one woman.

Individuals with same-sex attraction should be supported by the parish community in their journey toward holiness, the document stresses.

But homosexual couples “living openly same-sex lifestyles” are prohibited from receiving Communion and serving in parish leadership positions or liturgical ministries, according to the guidelines.

“Two persons in an active, public same-sex relationship, no matter how sincere, offer a serious counter-witness to Catholic belief, which can only produce moral confusion in the community,” the guidelines say.

“Such a relationship cannot be accepted into the life of the parish without undermining the faith of the community, most notably the children.”