Learning of homelessness at the library — not by books, but by men 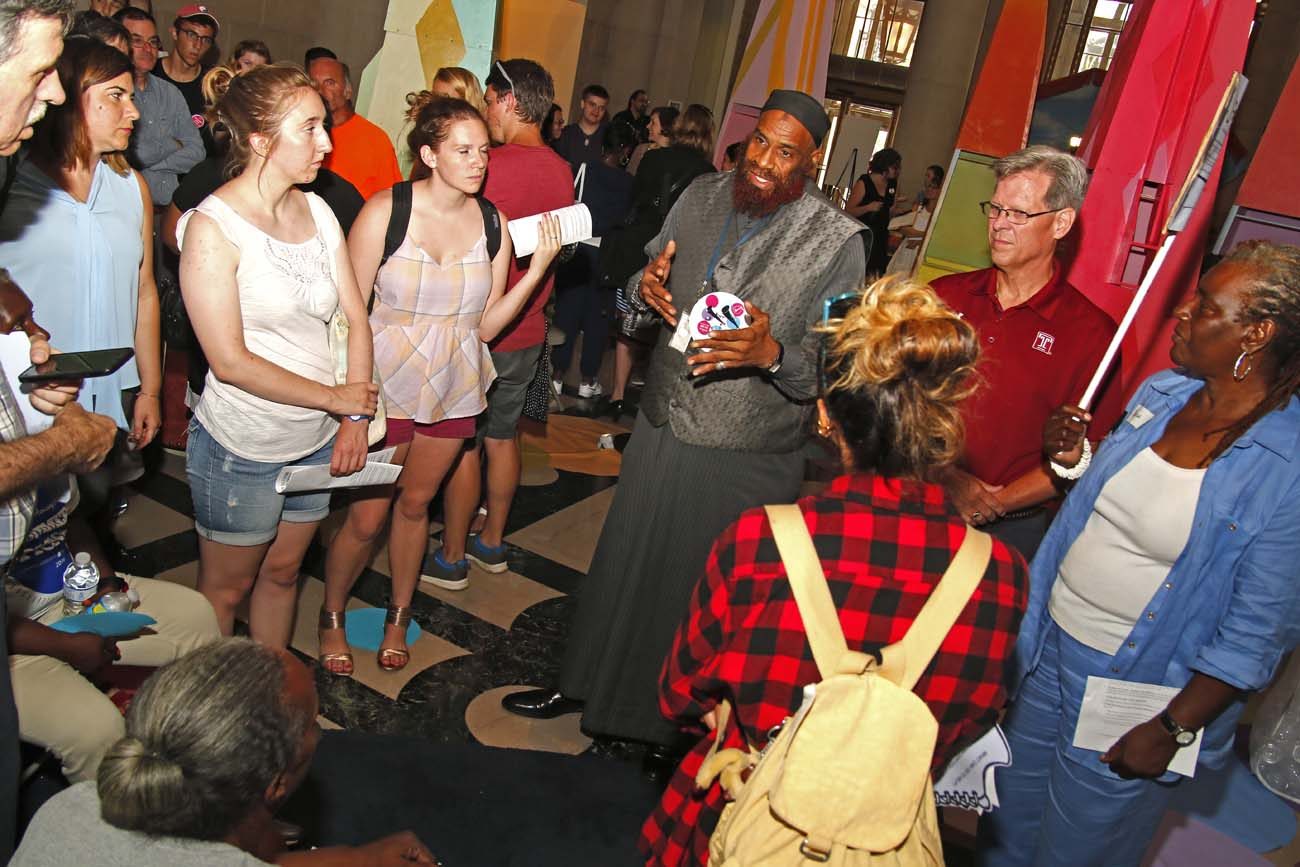 David, center, speaks to guests at the Free Library of Philadelphia's Central Branch July 26 on his experiences as a former homeless person now living in a Project HOME program. 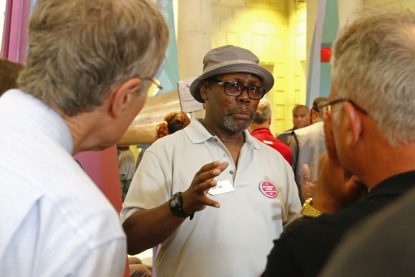 Alfonso describes to guests not only his many years living on the streets but also the outreach of Project HOME. “They saw in me what I didn’t see in myself and they taught me to be a better person and a better citizen,” he said.

It may sound absurd to say, “if you want to learn about homelessness, visit the library.” But there is a kernel of truth in that, at least in Philadelphia.

In conjunction with the Democratic National Convention this week, the Free Library of Philadelphia Central Branch, located on the majestic Benjamin Franklin Parkway, was the site of a July 26 one-day program “Stories from the Margins,” presented by Project HOME and Meg Seligman Studios.

Comprised of a construction by artist Meg Seligman, it featured testimony from half a dozen former members of Philadelphia’s homeless community, who told their stories and how they escaped their seemingly hopeless conditions, in their cases through programs offered by Project HOME, the city’s best-known street outreach agency.

The project’s slogan was “Homelessness, hunger and poverty must be addressed in this national election campaign,” and they were not just talking about the Democrats. The same program was presented the previous week in Cleveland during the Republican National Convention, according to Sister Mary Scullion, R.S.M., the founder of Project HOME.

“The faces of the homeless have been absent in campaigns in the past and we believe the voices of these courageous and reachable men and women should be heard,” she said.

Alfonso, who is 61, was no stranger to the streets. He’d been homeless in the past, and became homeless again three and a half years ago when he came out of prison. He literally had nowhere to go, and a friend suggested he go to a recovery house, which he did.

“They put me in an outpatient program. I was resentful and didn’t want to do it,” he said. “After six months I had to go somewhere else and someone told me about Project HOME, and I thought, ‘It’s just another shelter,’ but I went anyway.”

He was surprised by the whole menu of options provided by Project HOME — not just food and shelter but medical care too, and educational programs through the Honickman Learning Center. But more important he was treated as a person, not a client.

“They saw in me what I didn’t see in myself and they taught me to be a better person and a better citizen. Now I live in a Project HOME facility and I volunteer with them.”

David, another witness to the face of the homeless, never really had a chance as a child. As a victim of neglect he never attended school and was kicked out of the house at age 15.

With no other options he lived on the streets, or to be more accurate, on the Parkway and a stone’s throw from the library which coincidently is a favored restroom for the homeless.

He became part of a band of homeless men, about 25 of them who in the warmer months slept by the walls outside of what is now the Barnes Museum but was then the site of the former Youth Study Center, the intake facility for juveniles who had been arrested.

It was a facility that probably a number of sleepers had seen from the inside in their youth.

Every morning the police would make them gather their belongings and move on, but otherwise not disturb them. Actually, there was no animosity between the police and the homeless men and as a matter of fact the police would patrol the area at night which in David’s view “was to protect us.”

In winter, of course, they would retreat, usually to the underground nooks and crannies of the Philadelphia subway system. For meals, very often the men would frequent “Father John’s” — the street name for St. John’s Hospice, the city’s largest soup kitchen, run by Catholic Social Services of the Archdiocese of Philadelphia.

David was not unhappy with his condition in life. It was something he became used to, and definitely did not want to go to a social service program.

“They ask you for your age and your social security number, that’s all we are,” he said.

But one by one, his street family dwindled. It wasn’t that they moved away. One by one they died. When it was only himself and another old friend left, he regretfully decided it was time to do something to change his life.

“Most people want to get off the street but they don’t know how,” David said. “People don’t understand the homeless.”

Five years ago he made his way to Project HOME, and his life changed dramatically. He now has a studio apartment through Project HOME and is continuing the education denied him as a child.

“Now I have a third grade reading level and a ninth grade math level,” he proudly proclaimed.

Most important he now feels like he is a man not a client with an age and social security number.

Alfonso, David and the other former homeless men and women who gave testimony at the library certainly received the caring help and understanding they needed from Project HOME. But clearly a key ingredient to their transformation was that they arrived at a time when they were willing to make the necessary change that is facilitated by Project HOME and other outreach programs in the city.

One of the interested guests listening to the testimonies was James Amato, who was recently appointed Secretary for Catholic Human Services for the Archdiocese of Philadelphia.

“Having spent my career in social work and now have this wonderful opportunity to lead Catholic Social Services, being in touch with people who really changed through programs such as that of Sister Mary Scullion and Project HOME is a wonderful way to spend a July afternoon,” he said. 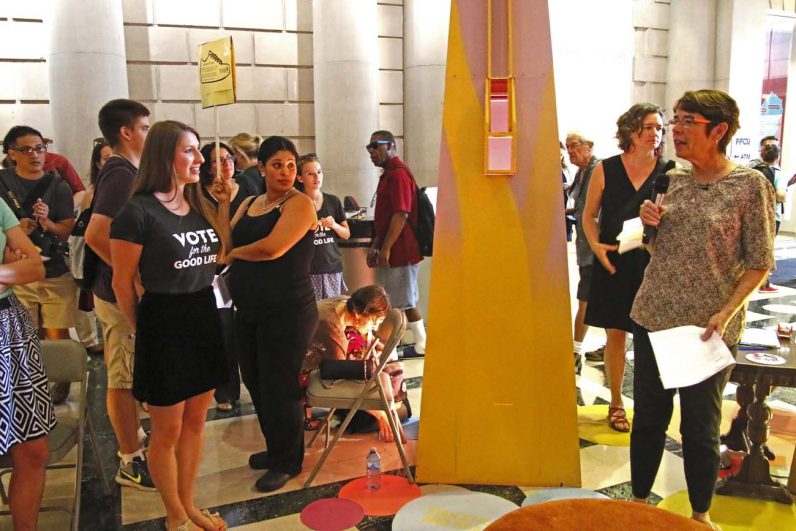 Sister Mary Scullion (right) speaks about homelessness in Philadelphia to guests at the Free Library of Philadelphia’s Central Branch July 27. The Sister of Mercy is cofounder of Project HOME, one of Philadelphia’s leading outreach programs to homeless people. (Sarah Webb)

PREVIOUS: Democrat: To gain seats in Congress, party must make room for pro-lifers

NEXT: Parish partnership creates ‘culture of inclusion’ in Phila. neighborhood