Democrat: To gain seats in Congress, party must make room for pro-lifers 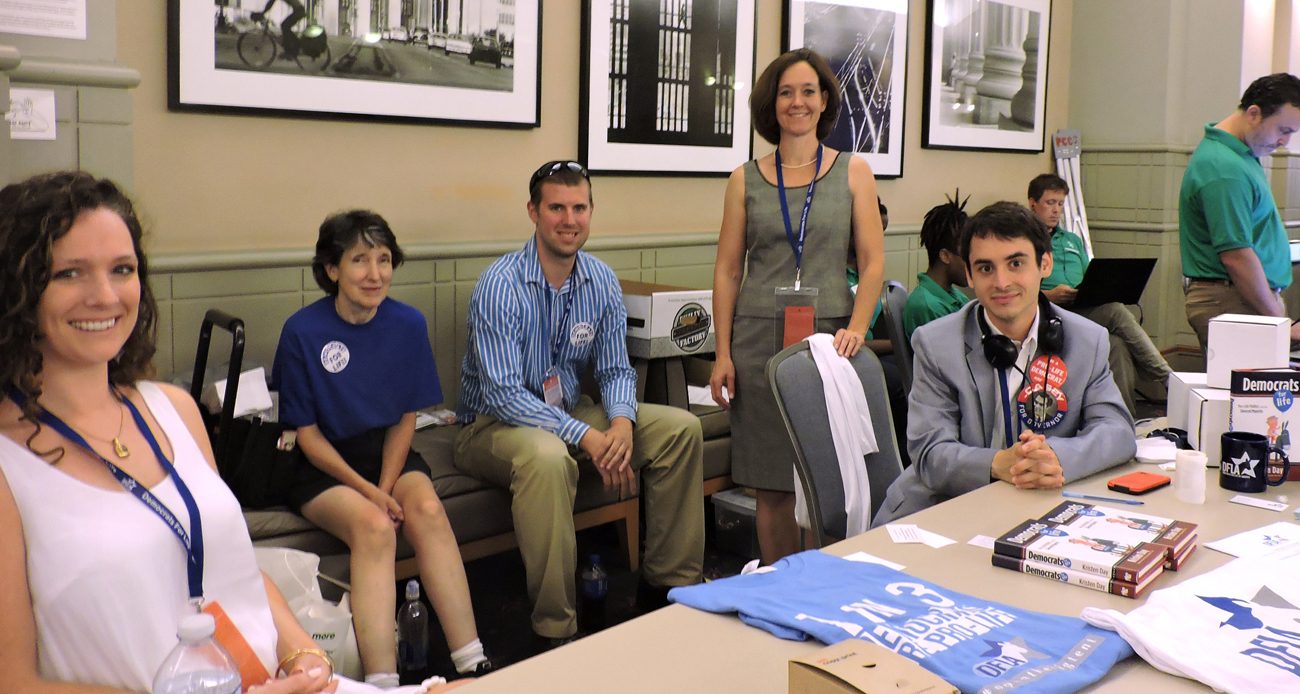 Executive director Kristen Day of the Democrats for Life of America, center, stands with other members of the pro-life organization July 27 during an event the group held in Philadelphia. (CNS photo/Elizabeth Evans)

One-third of all the members of the Democratic Party are pro-life, according to statistics quoted by Kristen Day, executive director of the Fairfax, Virginia-based Democrats for Life of America during a July 27 meeting held in Philadelphia in conjunction with the Democratic National Convention.

However, this does not translate into pro-life Democratic members of the U.S. Congress.

As the number of pro-life senators and congressmen has diminished so has the number of total Democrats diminished in both the Senate and the House, and Day attributes this to the abandonment of a “Big Tent” concept to one that considers promotion of abortion rights as a core value.

If the Democratic Party would again adopt a Big Tent approach and offer a voice for both sides of the abortion issue, Day believes the party could regain control of Congress. She thinks the Democrats lost the House because pro-life voters have abandoned the party.

“Ours is the most pro-life generation but also the most secular generation.” — Aimee Murphy, a young adult with the Life Matters group from Pittsburgh

This was the first year Democrats for Life actually had a table display at the convention site, and Day was encouraged by the amount of interest that was generated there.

Pro-life candidates can win if given a chance, the Democrats for Life assert, and Day cited the example of Louisiana Governor John Bel Edwards, who received the group’s Governor Casey Award at the July 27 meeting.

Many of those attending the meeting represented younger voters, including a Life Matters Journal group from Pittsburgh. “According to statistics, ours is the most pro-life generation,” said Aimee Murphy, a young adult with that group, “but also the most secular generation.”

In conversations they had with attendees at the convention her group’s members found most people were genuinely interested and respectful, she said.

Andrew Barnhall, a Clinton delegate from North Carolina, said many people in his state had strong convictions about life in a variety of ways.

“Our delegation is fairly split,” he said. “We are beginning to realize that there is a variety of views in the Democratic Party. Our party has always been a Big Tent party and we have to bring more people into it. This year is an opportunity for us to bring some Republicans on board.”

Janet Roberts, the board chair for Democrats for Life, which was founded in 1999, expressed optimism for the future but quotes one of the patron saints of the pro-life movement – the late Hubert Humphrey, former vice president and Democratic Party presidential candidate.

NEXT: Learning of homelessness at the library — not by books, but by men