The long way to World Youth Day: Walking from Rome to Krakow 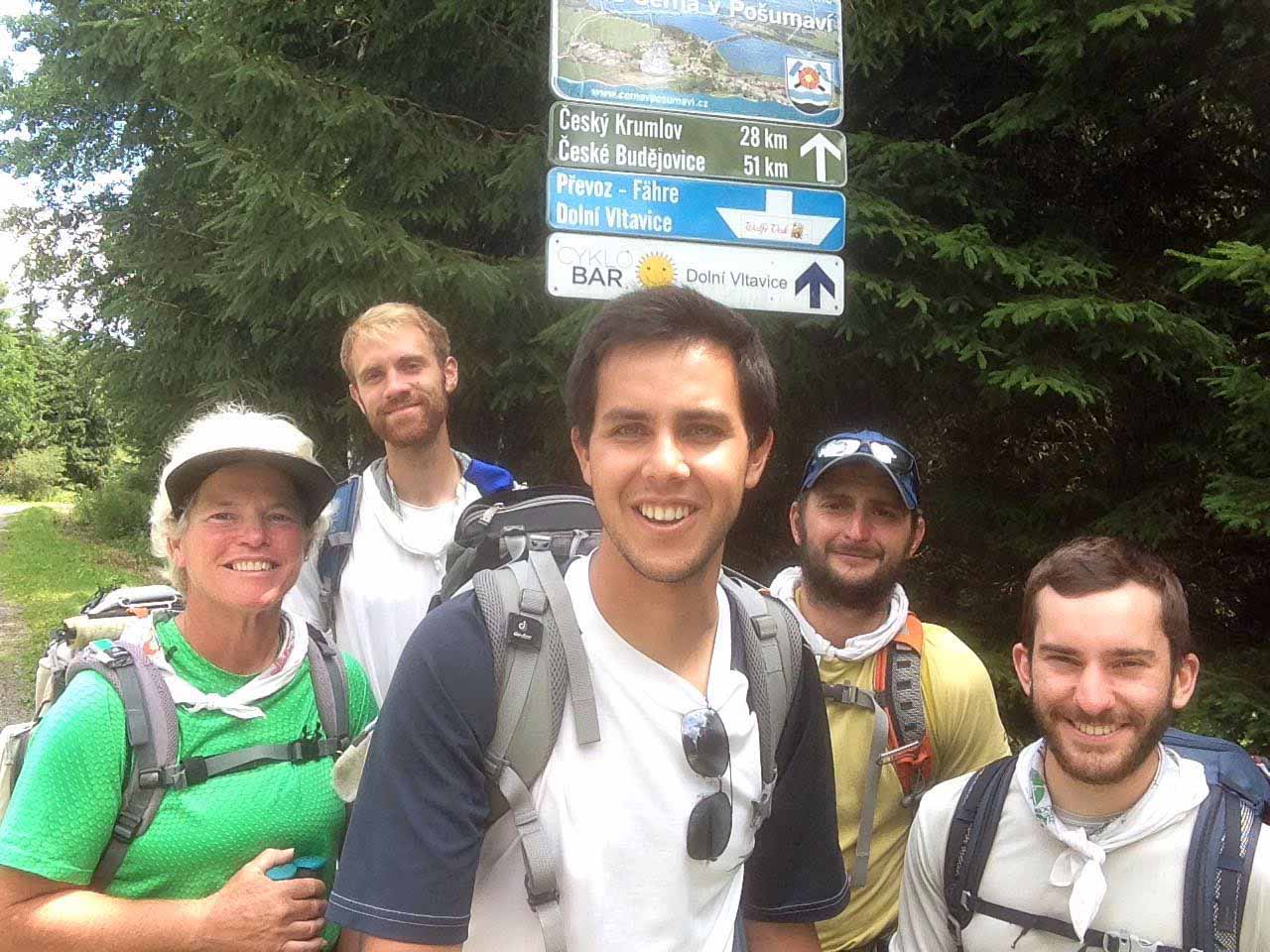 Taking a break on a road in Czech Republic, a group making a walking pilgrimage from Rome to Krakow, Poland, in time for World Youth Day includes (from left) Ann Sieben, Nick Zimmerman, Rafael Maturo, Ricardo Simmonds and Andrew Dierkes. 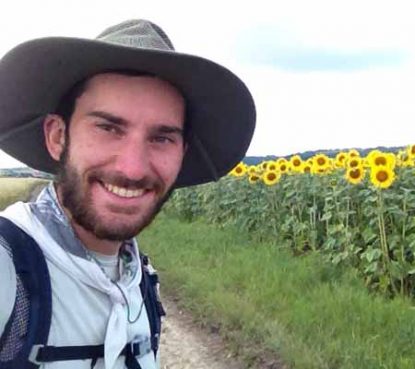 Andrew Dierkes stops to admire the flowers along a country road in central Europe.

It takes just over nine hours to fly from Philadelphia to John Paul II Airport in Krakow, Poland, for travelers who want to attend World Youth Day July 25-31 in that city. Some are taking a more leisurely pace, maybe seeing some sites along the way.

Take Andrew Dierkes, 23, of St. Agatha-St. James Parish in the University City section of the Philadelphia.

In May he flew into Rome which is also about a nine-hour flight from Philly and joined up with a band of four like-minded travelers. After a May 21 Mass at the Polish Crypt Chapel in the Vatican, the group set out on foot for a “Year of Mercy Pilgrimage” to Krakow, covering about 20 to 25 miles a day.

In the spirit of medieval mendicants relying on the hospitality of others, they are mostly spending their nights at monasteries or parish facilities.

Leading the group is Ricardo Simmonds, 35, a former director of the University of Pennsylvania Newman Center and founder of Denver-based Creatio, a group that organizes youth mission trips.

Crucial to the group, especially as an adviser, is Ann Sieben, 52, a former nuclear engineer who is a dedicated mendicant, having spent most of the past nine years on the road in pilgrimages to shrines, totally dependent on the hospitality of those she meets on the journey.

Rounding out the group is Rafael Maturo, 23, from Peru and Nick Zimmerman, 22, from Denver. All of the young men are open to the possibility of a religious vocation.

Dierkes, who was born and raised in St. Andrew Parish in Drexel Hill, graduated from St. Joseph’s Preparatory School and the University of Pennsylvania School of Nursing. He is currently a graduate student at Penn studying health outcomes and policy research while doing hospital work.

He also coordinates the RCIA program at St. Agatha-St. James Parish, and he met Simmonds through Penn Newman.

Dierkes had previously toyed with the idea of walking the famous El Camino de Santiago pilgrimage from France to Spain, but nothing came of it. 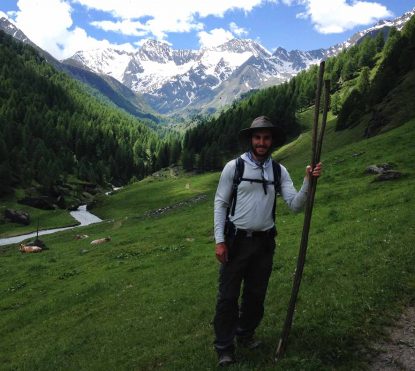 “Honestly, I do not yet understand why, but I believe God called me to walk this pilgrimage,” he said via email while on his journey. “The desire to do this has been placed in my heart long before the opportunity presented itself, and the timing and the opportunity cooperated to make it happen.”

The pilgrimage route meanders a bit as it winds through cities and towns in Italy, Austria, Czech Republic and finally to Poland. The group has been through Terni, Assisi, Arezzo, Bologna, Peschiera de Garda, Solden, Innsbruck, Bad Reichenhall, Andorf, Kajov, Trebic and Brno, and will arrive at the Shrine of Divine Mercy in Krakow by July 25, just in time for World Youth Day.

Technically the distance between Rome and Krakow is slightly under 1,000 miles but because they have not come in a straight line their journey is about 1,240 miles more or less.

As a group they split up at times. For example, Dierkes went off on his own to visit Prachatice, the birthplace of Philadelphia’s St. John Neumann.

As a practical matter, although they have not paid for lodging they have purchased their food unless it is offered to them by their host.

“My nature is one that does not like to inconvenience people, so I am very aware of our hosts’ efforts to help us along the way,” Dierkes said. “From this standpoint, I have been impressed by people’s willingness to receive us and to host us, even with little warning of our arrival and surprised when they seem to attach a value to our being there. For some our very presence is a gift.”

From a spiritual perspective, “This journey has been a mini survey of the church and an encounter with Christians living the Gospel,” Dierkes said. “They recognize Christ present in the least of their brothers and sisters and are honored, even humbled to provide for their needs.”

An essential part of a pilgrimage is prayer, and it was challenging at first for Dierkes to settle into a daily rhythm, balancing the spiritual and the physical aspects of the pilgrimage. He structured his prayer time in a morning offering and the rosary, ultimately leading up to 15 decades daily. There have been spiritual readings including St. Louis de Montfort’s “Secret of the Rosary” and a self-guided introduction to the Spiritual Exercises of St. Ignatius of Loyola.

Mass every Sunday has been a must but also daily Masses whenever the group stops where one is being offered. Also the Liturgy of the Hours when at a monastic community.

Very soon, this potentially life-altering pilgrimage will be at an end. For Dierkes, what happens next?

First of all he will return to Penn to finish his coursework and resume his hospital work.

“I think it is safe to say one does not walk from Rome to Krakow, experience WYD, and come back the same person,” he mused. “However, more specifically how this experience will change my life is hard to say. I tend to believe that, not unlike the pope’s visit to Philadelphia, the impact of the event has not yet been fully realized. I imagine there are seeds planted in this pilgrimage that will mature with time. I may appreciate this pilgrimage more in retrospect than at the present moment.” 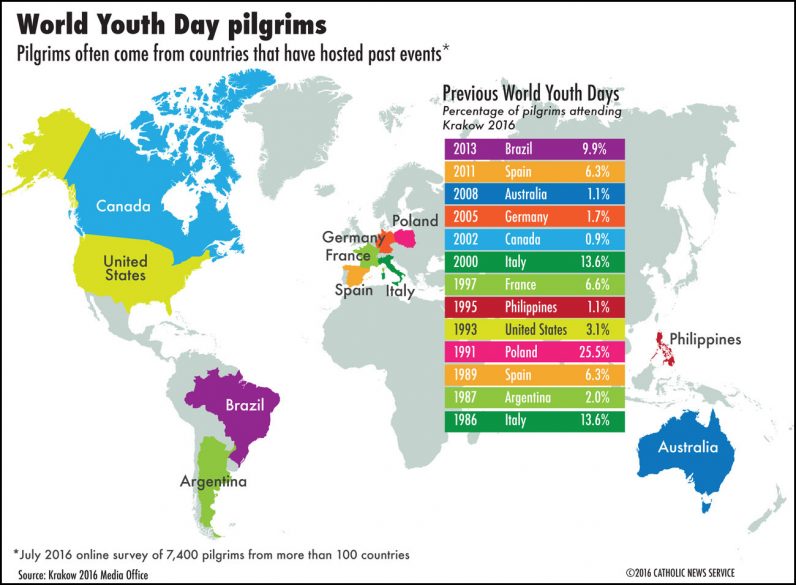