Coach says power of prayer, Eucharist fuel her efforts on, off field 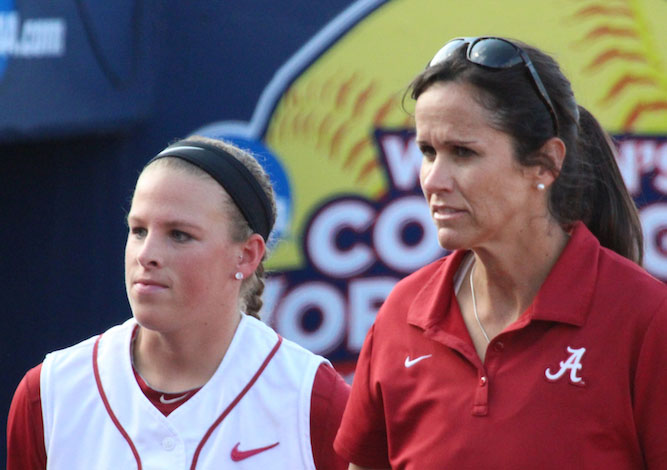 Alabama women's softball assistant head coach Alyson Habetz, right, is pictured with a player during a 2014 game in Oklahoma City. Since the Catholic coach arrived in 1998, Alabama has made nine trips to the World Series. (CNS photo/Fastpitch.TV)

OKLAHOMA CITY (CNS) — The power of prayer and the holy Eucharist fuels Alyson Habetz to new heights in life as well as in her coaching job as the University of Alabama’s softball associate head coach.

During the recent NCAA Women’s College World Series, national network cameras showed Habetz directing the offense of the Crimson Tide as first base coach. The Crimson Tide players were battling against the nation’s softball elite in Oklahoma City in early June.

Since Habetz’s arrival in 1998, Alabama has made nine trips to the World Series. Some years work out better than others for the Tide. This year, they lost an extra innings heartbreaker in the opener against Oklahoma, 3-0, and then had to book an early trip back home after falling 6-4 to Louisiana State University the next day. The two-and-done outcome was very different from four years earlier when Alabama took the NCAA crown.

“The Holy Spirit was really at work that night,” Habetz fondly recalled in an interview in with SportsUp News, a faith-based sports news website.

Win or lose, her faithfulness to Catholicism is most important to her.

She is devoted to praying the rosary and attending daily Mass. While in Oklahoma City, she received the Eucharist at St. Joseph Old Cathedral.

“The Eucharist is my fuel. It keeps me going,” she said.

She sees many similarities between growing in her faith and her dedication to sports.

“It’s sometimes hard for me to get up early and pray or go to Mass, but I know I have to do it and I know how much it will help me,” she said. “It’s the same in sports. You have to do the drills to perfect your skills.”

Her commitment and love for her faith inspires others.

That’s the case with Kallie Case, a senior utility player for Alabama.

“Aly is a shining light in my life and will continue to impact so many people with her faith,” Case said of Habetz. “It’s amazing to see that she can stay smiling and happy every single day. She is a godly woman and is a great example of who I strive to be.”

Minutes after losing to Oklahoma, Habetz was far from dejected and looked forward to another opportunity. Again, she used her belief structure.

“Christ came to give us all hope in all situations,” she said.

Habetz grew up in Louisiana in a large family and was accustomed to going to Mass regularly and receiving the sacraments.

Her first sports love was for baseball, not softball. After some legal challenges, she played first base and pitched for Notre Dame High School in Crowley, Louisiana, in the Diocese of Lafayette.

Her college career was at the University of Louisiana at Lafayette, where she excelled in basketball and softball, before graduating in 1995 with a bachelor’s degree in communications. She also made her own trip to the Women’s College World Series in 1993. One of her assistant coaches was Patrick Murphy, now head softball coach at Alabama.

“Alyson is a great role model for our players and future recruits,” he said. “She is one of the most outstanding people I have met.”

After college, she got to play out her dream of playing professional baseball, pitching three years for the Silver Bullets, an all-women’s team.

“My fastball was in the 80ish range, but my curveball was something else,” Habetz recalled.

The Silver Bullets garnered national publicity during their short life doing exhibitions in the 1990s. After the first year, the team was enshrined in the National Baseball Hall of Fame in Cooperstown, New York. There to help mark the event was her friend and sports hero Tommy Lasorda, the famed longtime Dodger manager.

Lasorda, a fellow Catholic, remains in contact with her to this day.

“As a coach, he always told me to make players believe they can do it,” she said. “He is quite a motivator.”

Habetz is mentioned in a 2015 book on Lasorda, called “Tommy Lasorda: My Way” by Colin Gunderson, published by Triumph Books.

During her time with the Silver Bullets, Habetz wasn’t quite as devoted to her faith as she is today. Gradually she read and was more motivated to pray the rosary and attend daily Mass. It’s a practice she’s continued in recent decades.

“I do what I have to do to grow in holiness.”