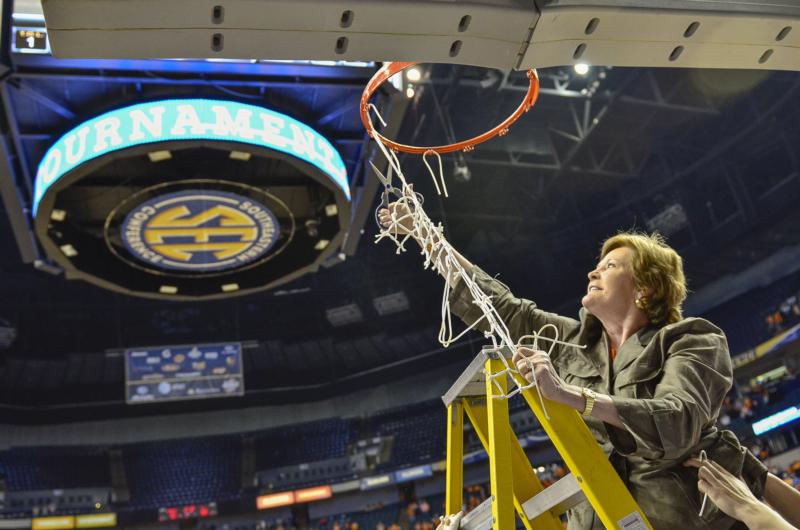 Hall of Fame coach Pat Summitt cuts the net after winning the 2012 SEC tournament, her last as head coach of the University of Tennessee Lady Vols. Summitt, a pioneer of women's college basketball who guided the Tennessee Volunteers to eight national titles in her 38 seasons at the university, died June 28 at age 64. (CNS photo/Patrick Murphy-Racey, Tennessee Register)

NASHVILLE, Tenn. (CNS) — Pat Summitt, the legendary architect of the powerhouse of the Lady Volunteer women’s basketball program at the University of Tennessee, had an impact that was felt far beyond the Knoxville campus where she made her name.

Her team won eight NCAA titles and 22 Final Fours. She led the Lady Vols to 1,098 victories — the most in Division I college basketball history (men or women).

She stepped down as coach in 2012, one year after announcing she had early onset dementia. Summit died June 28 at age 64. News reports said she died peacefully, surrounded by loved ones at a senior living facility in Knoxville. A private funeral was held for her June 30 in Clarksville.

Her success and drive for excellence helped raise the level of interest in girls basketball and the quality of play throughout Tennessee high schools and middle schools, said Jinx Cockerham, former girls basketball and volleyball coach at Father Ryan High School in Nashville.

In the late 1970s and early 1980s, Summitt was the biggest advocate for Tennessee high schools converting from the three-on-three game for girls basketball to the five-on-five game that was being played on the college level and in the boys game, said Cockerham, who retired last year after 46 years as a legendary coach at Father Ryan in her own right.

In the three-on-three game, each team had three defensive players and three offensive players who weren’t allowed to cross half court. Summitt argued that the girls playing under those rules were falling behind in developing their skills and were not prepared to play the college game, Cockerham explained.

“She pushed it for girls all over the country. They weren’t having the same opportunities as other girls” who were playing the five-on-five game at a younger age, Cockerham said.

“She felt most of the females were a little behind, and we were,” Cockerham told the Tennessee Register, newspaper of the Nashville Diocese.

“I don’t know of another single college coach who was as strong an advocate as she was,” Cockerham added. “I was a little reluctant at first, because I liked the (three-on-three) game. But there was no doubt to keep up with everyone else we had to change.”

Summitt’s advocacy was not just to benefit her program at Tennessee, Cockerham said, but to give women more opportunities to play at all levels of college competition. “You see how many Tennessee athletes now have opportunity to play” in college, she added.

Raised a Methodist, Summitt was born Patricia Sue Head in Clarksville, about 60 miles northwest of Nashville, and grew up on a farm in Henrietta, playing basketball with her brothers. She starred at Cheatham County Central High School, just west of Nashville, and later at the University of Tennessee-Martin. She became the head coach at Tennessee at age 22 in 1974, and two years later was the co-captain of Team USA, which won a silver medal at the 1976 Olympics.

She soon built Tennessee into a national power. Her success had an impact on high school, and even middle school, coaches throughout Tennessee, Cockerham said, as they adopted some of her methods.

Summitt would have her team of women’s players practice against men to sharpen their skills. “She would talk about that,” Cockerham said. “When I heard that, I did that too.

“She did a lot of things like that that you wouldn’t have thought about,” Cockerham said. Now, her methods are commonplace, she said.

“Pat’s legacy as a person is one of tireless hope for the impossible. Wherever she set her gaze, she achieved that goal, and then some,” said Deacon Patrick Murphy-Racey.

He made the comments in an online remembrance of her. Now serving as a deacon in the Diocese of Knoxville, he is a former newspaper photographer and magazine sports photographer who got to know former University of Tennessee women’s basketball coach Pat Summitt while covering her for more than 30 years.

“The last part of Pat’s legacy is Alzheimer’s. It’s up to us now to beat it into submission and blow it off the sideline,” he continued. “We may live in a fallen world that brings death to each of us, but if we are a people of faith, we can level our own stare at Alzheimer’s and beat it too. The Pat Summitt Foundation, founded after her diagnosis to raise awareness about the disease, would be a logical choice to lend aid. The challenge has been made.”

He urged people to donate to the foundation at www.patsummitt.org.

A public Celebration of Life service for Summit was planned for July 14 at Thompson-Boiling Arena at the University of Tennessee, where the court is named in her honor.

NEXT: Coach says power of prayer, Eucharist fuel her efforts on, off field