From the ‘living hell’ of youth, a young man’s future looks bright 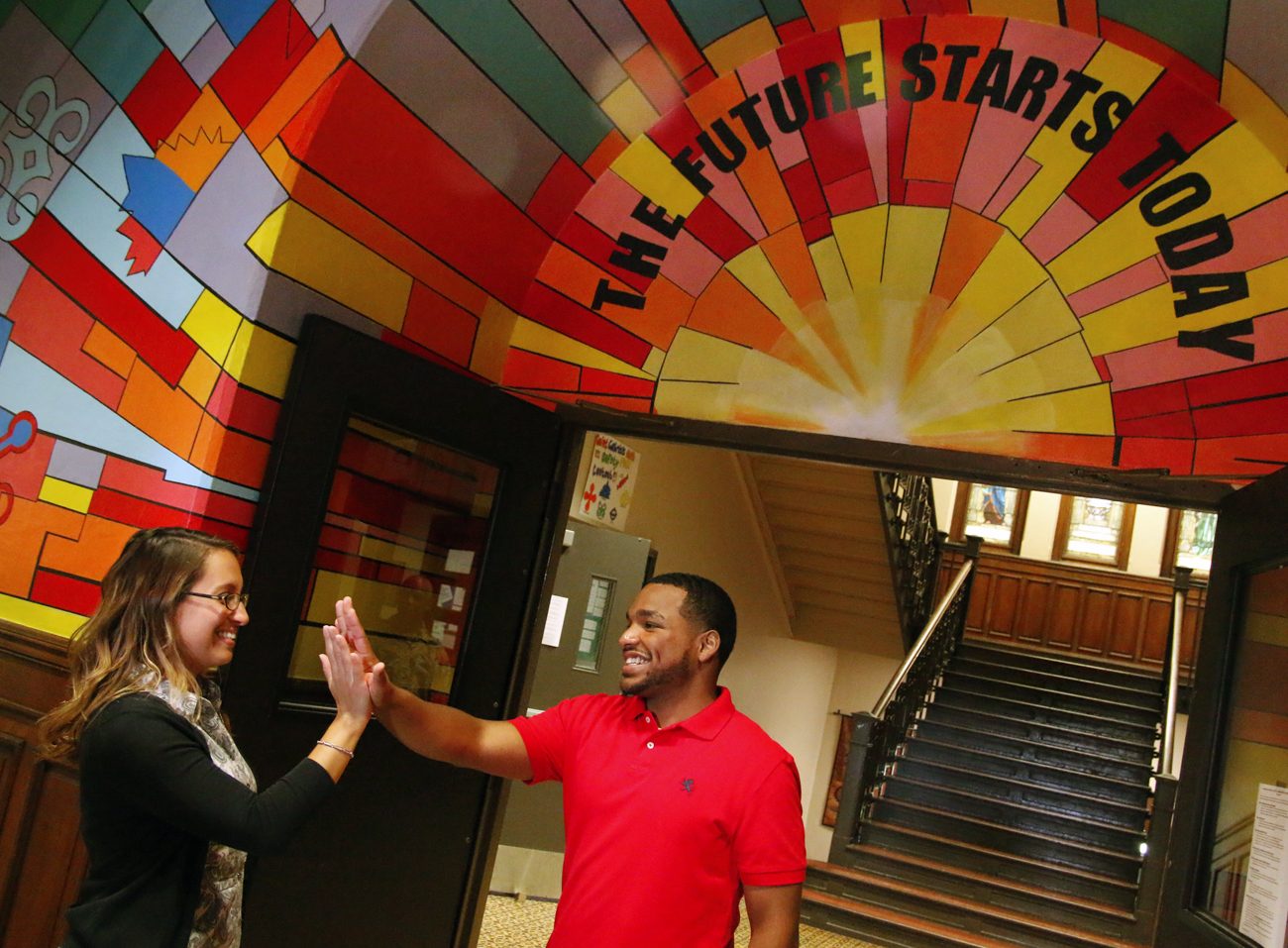 Felix Alberto gets a congratulations from his English teacher at St. Gabriel's Hall, Nicole Yezik, upon obtaining his GED certificate and plans to attend Kutztown University. After he leaves St. Gabriel's soon, he will start a new life thanks to the care and support from the archdiocesan program for court-adjudicated boys and young men. (Sarah Webb) 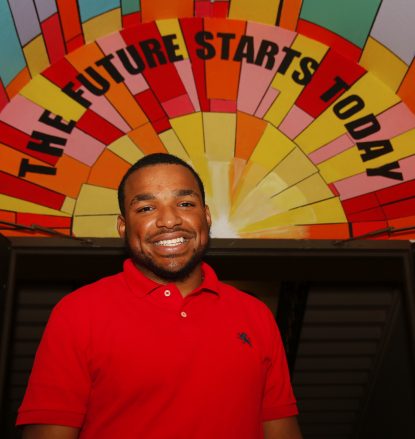 St. Gabriel’s Hall in Audubon, the flagship residential program of the Archdiocese of Philadelphia’s St. Gabriel’s System, has been in the business of re-forming, in the best sense of the term, court-adjudicated delinquent boys and young men into productive citizens since its foundation in 1895 as the Catholic Protectory for Boys.

Most of the time, but not always, it does work although the results may not be apparent until years in the future. The quiet success stories usually don’t make the evening news, just the failures.

Other times the positive outcomes can be immediately apparent and in a few cases, quite spectacularly so.

Felix Alberto, 19, who is leaving St. Gabriel’s Hall very soon, is not going directly to jail but directly to Kutztown University in Berks County. He first wrote his life story in a petition to be declared an emancipated minor and for college applications.

His mentors at St. Gabriel’s were so impressed they suggested he share it with the archdiocese which he did through a long letter to Archbishop Charles Chaput. The archbishop was also impressed to the point that he invited him to lunch on Aug. 12.

His story in briefer form begins when Felix was born into a very dysfunctional family in North Philadelphia.

His mother was a substance abuser who had children by several men and his own father was not a factor in his life. He was virtually ignored by his mother and mistreated by his older siblings.

The only stable adult in his early life was his maternal grandmother whom he loved dearly, and she loved and protected him.

When Felix was 9, his grandmother became very ill and died in the hospital. He and his brothers were left with no support other than their mother. After a time the family received a settlement for the wrongful death of his grandmother but his mother just went off and spent it.

“I rarely had anything to eat. It was living hell,” Felix wrote. “Our electric and gas was constantly cut off because my mother had spent the money she had on her addiction.”

Felix did have a best friend whose mother would feed him, but other than that, “I felt so alone my entire life,” he said. “All I used to do was cry and wish to have a family to love and appreciate me.”

Things did not get better; his mother overdosed and almost died. His friend was killed in a shooting, and he thought, maybe being dead is better than living.

Ultimately he started running with a bad crowd and getting into trouble with the law. Skipping school was routine for him. In his high school years he quit one school, was sent to another where he was expelled, and simply dropped out of a third.

There were court appearances too, but not enough to warrant incarceration, just probation. Finally a judge noticed that in his court appearances there was never a family member present to support him. She remanded him to St. Gabriel’s not so much for punishment as to give him stability. That was 15 months ago.

“I thought I knew everything and I felt that no one could tell me anything and there was no one or anything that could help me,” Felix wrote. “I thought I had it all figured out and in reality I was living a lie.” 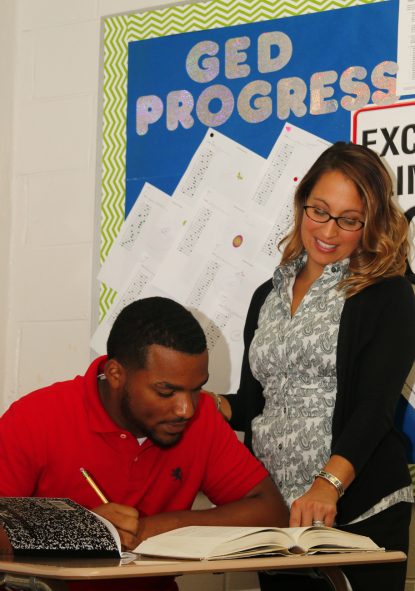 Nicole Yezik, English teacher at St. Gabriel’s Hall, mentors Felix Alberto in his study skills, which led to his completion of his GED certificate. (Sarah Webb)

And finally there was Nicole Yezik, his English teacher.

“She has been a great mentor, teacher and mother figure,” Felix wrote. “She believed in me since the first day. She invested all of the extra time after school to help me with my problems and she helped me organize all of my goals. She was there when I needed her. She is one of the main factors of my change of life.”

It was Yezik who recognized his obvious writing talent and encouraged him to use it.

Although he did not receive a standard high school diploma from St. Gabriel’s, through intensive tutoring he was able to receive his GED and as a matter of fact his scores were so good he was named Pennsylvania’s GED Student of the Year.

His SAT scores were also outstanding — 1140 out of 1600 in a state where the average score is 993. Pretty extraordinary for a high school dropout with a GED.

“I thought I was going to be a failure like the rest of my family, but St. Gabriel’s Hall changed all that for me,” he wrote. “Many students view St. Gabriel’s Hall as punishment but Gabe’s is a blessing. Anyone can accomplish great things if they utilize the program correctly.”

Felix has had his luncheon with Archbishop Chaput who was “very down to earth and a great guy,” he said.

Now Felix is off to Kutztown and at this point considering a career in business management. Not all of the financial details have been worked out but hopefully they will come together.

Very sensibly he’s cut what little ties he has with his birth family at least for now, and he is really on his own.

Sure there will be challenges in this strange new world he is entering. But one suspects he will meet them head on, thanks to the preparation he received at St. Gabe’s.

In his case dreams truly do come true. 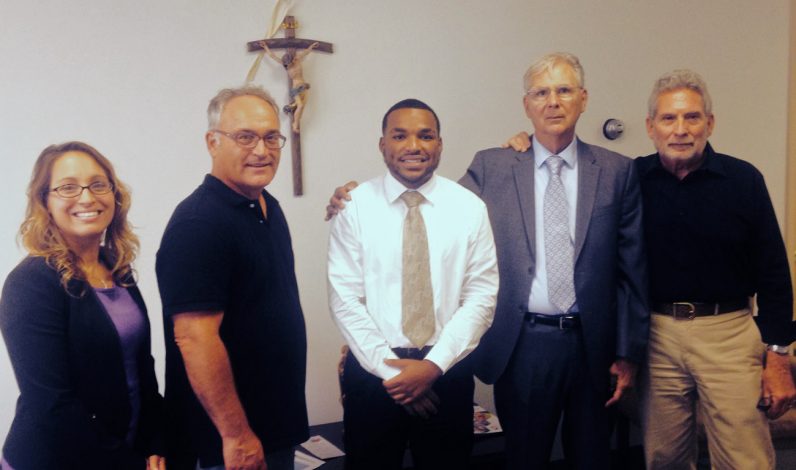 PREVIOUS: Big bump in seminary enrollment another sign of vigor for vocations

NEXT: Studying for the GED, one student at a time