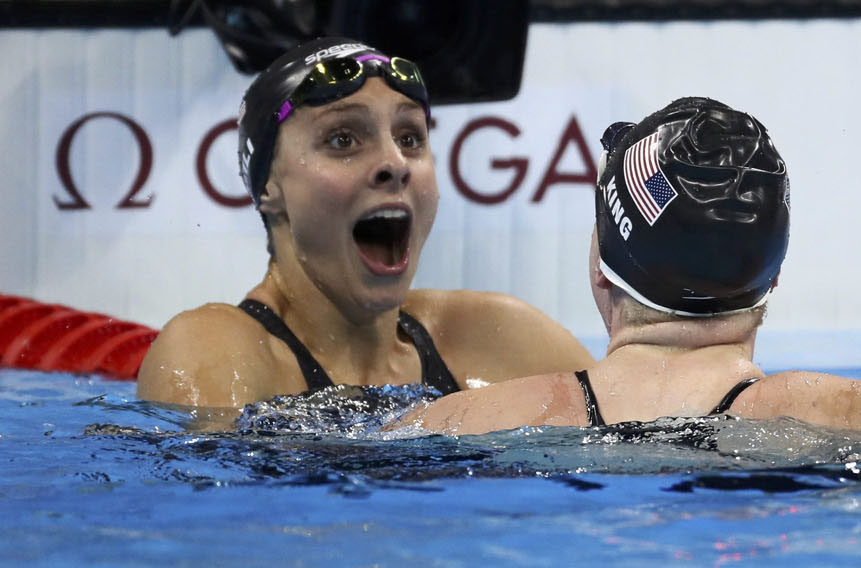 FORT WORTH, Texas (CNS) — Matthew Coffer, a 2007 Nolan Catholic High School graduate, said it best in a comment posted to the school’s alumni page: “It was a great night to be a Viking!”

He was referring to the pride and excitement when Nolan alumna Katie Meili won the bronze medal in the women’s 100-meter breaststroke at the Olympics in Rio de Janeiro. The Colleyville native, who graduated from Nolan Catholic in 2009, posted a time of 1:05.69. Another American, Lilly King, beat out a Russian competitor to win the gold.

Meili is the first Olympic athlete in the school’s 55-year history.

“I’m just so happy,” a beaming Meili told reporters moments after her race.

“It’s a lot of hard work, but I’ve had so much support along the way,” Meili said. “This medal belongs to so many more people than just me, and I’m really proud of them.”

The 25-year-old’s former swim teammates at Nolan Catholic gathered for a watch party in the school’s auditorium Aug. 8. They were joined by current students, faculty members, and friends of the Meili family, who had watched the athlete’s swimming prowess blossom, first at Columbia University, where she clinched a 2013 Division I NCAA bronze medal in the 100-meter breaststroke, and later at the invitation-only SwimMAC elite team in Charlotte, N.C.

Sports analysts said Meili was a long shot for an Olympic medal, but that’s not how the Nolan community felt. Current and former Nolan students wore blue T-shirts inscribed with the words, “All Viking for Meili” as they watched the 2016 Olympian compete.

“Everybody at the watch party knew it was going to happen,” said Nolan Catholic President Erin Vader. “If there is power in prayer and positive thinking, the people here got her through it.”

During the race, no one sat down.

“The sound was deafening. People were laughing and crying,” Vader said, describing the moment when TV graphics announced Meili’s bronze-medal finish. “It was thrilling.”

Stephen Montes, a Nolan classmate and friend of Meili, remembered her as “super supportive” of teammates when she swam the breaststroke and 200-meter individual medley in high school.

“Her practices were always intense,” he recalled. “She was a great teammate — humble and down to earth. Regardless of how tonight turned out, we would be proud of Katie.”

“She would give regular updates when she was swimming at Columbia and MAC Elite,” Russell said. “I’ve watched her progress to international meets and get faster and faster. It’s wonderful that she captured the swimming world’s attention.”

“She was never an Olympic shoo-in but at the same time, it was a very real dream,” she said.

“Katie winning this medal makes our other athletes feel like the Olympics are possible and that’s amazing,” Vader says. “It gives them a new goal.”

Kurkowski-Gillen is a reporter for North Texas Catholic, online newsmagazine of the Diocese of Fort Worth.

PREVIOUS: Gymnast keeps rosary — a gift from her mom — close when she competes