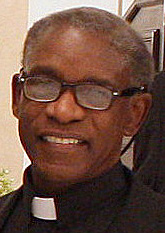 The Knights of Peter Claver and Ladies Auxiliary will present their annual Claver Award to Father Rayford E. Emmons on Saturday, Nov. 19 at 5 p.m. at St. Charles Borromeo Seminary.

Father Emmons is the first African-American priest to become pastor of a parish in the Archdiocese of Philadelphia. He will be honored for his lifelong dedication to the Catholic community by the largest Black Catholic fraternal organization in the country.

Ordained in 1974, Father Emmons was named pastor of the former St. Elizabeth Parish in North Philadelphia in 1987. During his 42 years in the priesthood, he has served in prison, hospital and senior citizens ministries, as well as the Catholic Youth Organization (CYO) and Catholic Social Services. He is currently parochial vicar at Holy Cross Parish in Philadelphia.

The theme of this year’s Claver Award banquet is “Spreading Faith, Hope and Charity” (Forty Years of Claverism), which highlights the 10th anniversary of the award.

The banquet emphasizes the mission of the Knights’ and Ladies’ patron, St. Peter Claver, by acknowledging the time, talent and treasure of those adults and young people whose efforts have significantly impacted their church and community.

The Knights of Peter Claver is the largest historically Black Catholic fraternal organization in the United States, founded in 1909, in Mobile, Ala. Its current headquarters is in New Orleans, La. – see the website KofPC.org. In 1976 the organization’s first council and court in the Archdiocese of Philadelphia was established.

The Knights’ mission is to follow St. Peter Claver’s example by serving others in friendship, unity and Christian charity.