The Red and the Blue: Catholic League football realigns for fairness’s sake 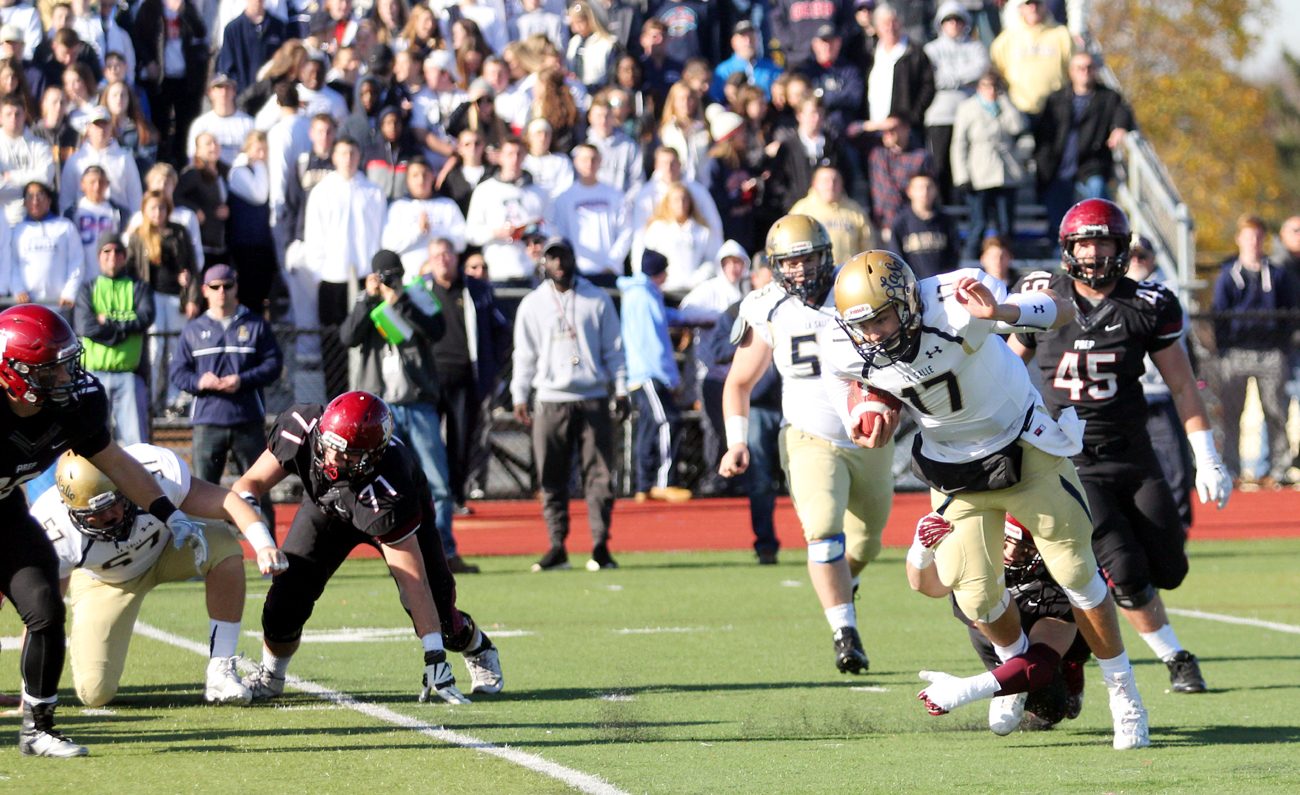 For the first time since 1961, this year’s champions will be determined by regular season records. A tiebreaker — starting with head-to-head results — will be employed should there be two or three teams with the same record.

Since 2008, three different teams have been crowned as champions, depending on their enrollment size (4A, 3A, 2A, respectively). This fall, the Catholic League has switched to a two-division format.

After the regular season will come seeding for the Pennsylvania Interscholastic Athletic Association (PIAA) tournament. This year, there will be five classes (6A, 5A, 4A, 3A, 2A). Determining the respective PIAA representatives will require playoff games that follow the last week of the regular season.

Below is a summary of each team in the Catholic League.

So Far in 2016 – The Patriots are 0-2. Smith has gained 90 yards and a touchdown on 19 carries. Quarterback Steve Honick (25 for 52, 448 yards, two touchdowns) has connected with Jay Smiley five times for 195 yards and two scores. Dahmar Ruffin has added eight catches for 123 yards.

“The team has a lot on its plate this year,” said junior defensive lineman Anthony Warnick. “With the energy from our new coaching staff, we can shock some people and put Carroll football back on the map.”

So Far in 2016 – The Raiders are 2-0 and have outscored their opponents by 80-19. McNeil has been on a mission, having already amassed 427 yards and seven touchdowns on 42 carries. Romano has completed 14 of 27 passes for 165 yards and a touchdown.

“It’s obviously a challenge,” said coach Frank McArdle. “We get a schedule and we go play it. What’s the point of complaining?”

So Far in 2016 – The Vikings are off to a disappointing, and weird, 0-1-1 start. A 21-21 tie in Wayne, Ohio, was cancelled in the second quarter because of weather concerns. A 34-16 loss to rugged Bergen Catholic showed rare defensive lapses.

Blackshear has accrued 193 yards and two touchdowns on 22 carries. Thompson has added 64 yards on 12 rushes. Sophomore quarterback Jack Colyar has found success when firing to Webb, who has already caught 10 passes for 145 yards and a touchdown.

“Right now, the ultimate goal is to win the Catholic League,” said coach Steve Devlin. “Then that will get us to the next goal.”

So Far in 2016 – The Crusaders are 2-0 and have outscored their foes by 75-14. King has been unstoppable both passing (21 of 28, 297 yards, five touchdowns) and rushing (190 yards and two scores on 21 carries). Gies (10 catches for 135 yards and three TDs) has been the go-to receiver; Steve Arrington snared three interceptions in a season-opening win over Council Rock South.

“We return six starters on defense and six on offense, all who got valuable experience as sophomores and juniors,” said coach Mike McKay. “We need to find depth on the offense and defensive lines.”

So Far in 2016 – The Explorers are 1-1, including a 28-0 win over Pennsbury highlighted by LaMorte’s four touchdown passes and a terrific all-around team defense. Coming off a sensational junior season ((14 touchdowns and 1,213 yards), Madden has already carried 51 times for 311 yards and two TDs.

“We don’t have tons of depth, so we have to stay healthy,” said coach Jim Murphy. “Lose a player, and you might lose three positions.”

So Far in 2016 – The Hawks’ season opener last week produced one word: Wow. A 49-17 win at California’s Oaks Christian served noticed that the Prep wants to return to the glory days of 2013 and 2014, when they captured both the Catholic League and PIAA Class AAAA state championships.

University of Georgia-bound running back D’Andre Swift might be ready to play college ball right now. Against Oaks, Swift scored the first two times he touched the ball and finished with 303 yards from scrimmage – 128 on 14 carries, and 175 on three receptions. He scored four touchdowns – two rushing, and two receiving. Junior QB Marquez McCray contributed a solid 14 of 22 passing for 287 yards and two touchdowns.

“The new schedule is probably in the best interest of the league,” said coach Gabe Infante, whose Hawks face Archbishop Wood in the CL opener on Sept. 16. “It makes every game more meaningful.”

So Far in 2016 – The Lancers are 1-1 and have scored 64 points. Lloyd has rushed for 227 yards and five touchdowns on 31 carries while QB Bryson has added 93 on 15. Bryson has also thrown for 262 yards and three touchdowns. McDevitt’s secondary has intercepted two passes.

“We have seven or eight returning starters on both sides of the ball and a three-year starting quarterback,” said coach Mike Watkins. “We’re switching from a 4-4 (defense) to 4-3, because it fits our personnel. We’ll have some growing pains. But there are a lot of nice changes going on with our program, including a sodded field and a nice weight room. I’m feeling very positive.”

“I like the new alignment a lot,” said coach Jack Muldoon. “It really gives us a chance to compete.”

So Far in 2016 – The Lions have already doubled last year’s victory total. Their 2-0 record is far from a mirage, as suggested by a 77-6 advantage in scoring.

Myles Henderson (14 carries for 133) and Te’Ron Johnson (14 for 131) have supplied a one-two punch while Nick Kutufaris has added 102 yards on nine carries. Through the air, the aptly-named Tommy O’Hara has completed 14 of 22 passes for 156 yards and three touchdowns. Santilla has caught six passes for 60 yards and two scores.

“We started 10 underclassmen last season,” said coach B.J. Hogan. “We have some very good sophomores who will compete for some jobs. A few transfers will join our school and football program. We are very excited about our incoming freshman class.”

So Far in 2016 – The Eagles are 1-0, defeating Archbishop Carroll, 21-7. Garwo has amassed 234 yards and three touchdowns from scrimmage. QB Jones has added 60 yards on eight carries.

“If we finish the year with the key players we start the year with, we will be competitive with every team on our schedule,” said coach Jack Techtmann.

“Our season depends largely on the maturity and leadership of our senior class,” said coach Tom Kirk. “Depth is an issue, so we need some luck in staying healthy. Developing serviceable backup players is critical for us to be competitive.”

So Far in 2016 – The youthful Saints are 0-1, and another game was cancelled because of a hurricane threat. A 65-yard TD toss from Tucker to Aiden Brown provided future promise.

“We are very young,” said coach Lincoln Townsend Jr. “We will have quality over quantity. If we get the kids up to speed, I think we can surprise some people.”

So Far in 2016 – The Burrs are 1-1. Quarterback Da’vion Kidd-Jackson has completed 20 of 37 tosses for 209 yards and a touchdown. Barry caught nine of those for 66 yards and a score. Wortham has gained 116 yards and two touchdowns on 24 carries

“We’re keeping the kids focused on our mission,” said coach Brian Fluck. “They can’t falter. We have to compete every week. Each week is a playoff game.”

NEXT: A girl among boys: Champion golfer earns respect of male teammates