Mercy offered to driver after fatal accident aids her healing 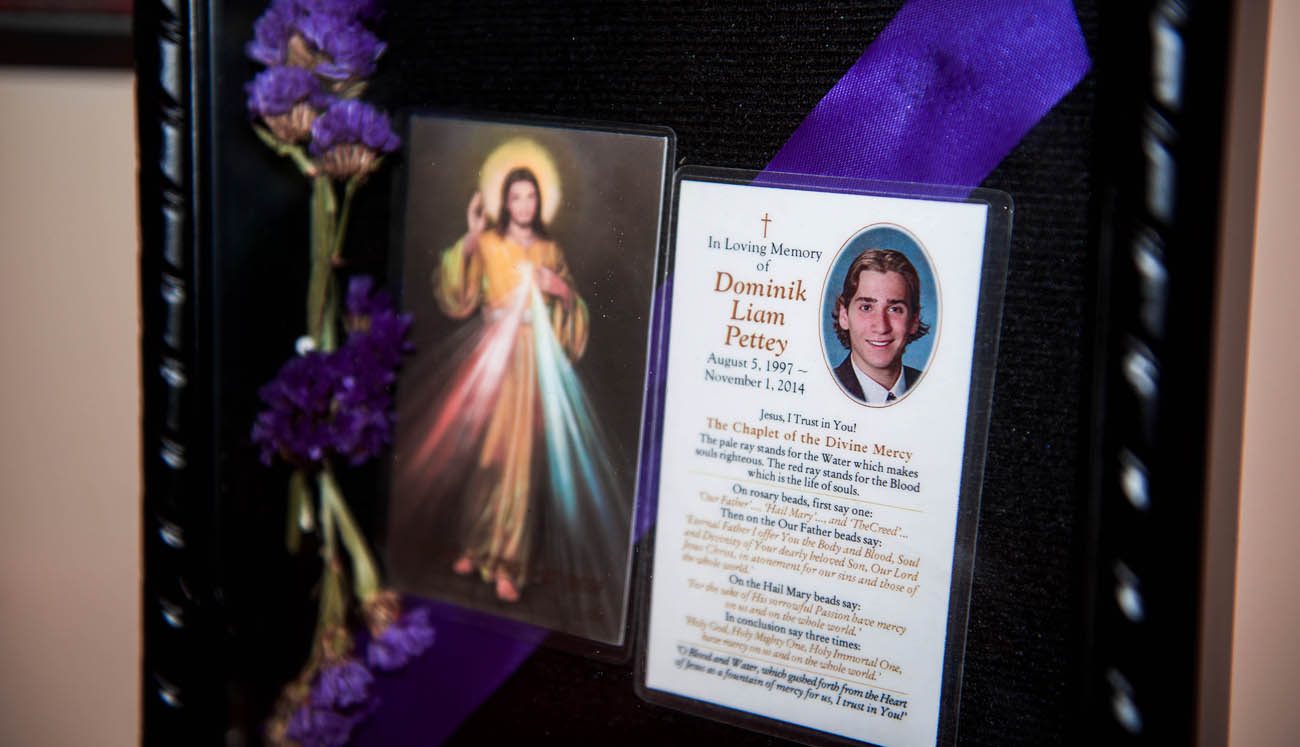 This memory box honors Dominik Pettey, a 17-year-old who attended Gonzaga College High School in Washington and was killed in a car accident in November 2014. Margaret "Maggie" Baisley, the driver of the vehicle that caused the death of Pettey, said the compassion shown to her after the accident by the boy's parents was the "most profound" experience of grace she has felt in her life. (CNS photo/Nicholas Pettey)

WASHINGTON (CNS) — The driver of a vehicle who caused the death of a Washington Catholic high school student said the compassion shown to her after the accident by the boy’s parents was the “most profound” experience of grace she has felt in her life.

The driver, Margaret “Maggie” Baisley, was a 24-year-old doctoral student in clinical psychology at the time of the November 2014 crash that killed Dominik Pettey, who attended Jesuit-run Gonzaga College High School in Washington.

She said she became humbled and changed in a “billion different ways” when his parents, Magdalena and Patrick Pettey, showed mercy by offering their prayers and by asking a local prosecutor not to charge her with manslaughter.

Baisley said the parents’ request to meet with her and express concern for her well-being led to a positive change in all of her relationships, professionally and personally.

The greatest gift the parents gave, Baisley said, was to let her feel forgiven for her connection to the “worst possible thing you could do: be responsible for the death of another person.”

Magdalena Pettey, a daily churchgoer and eucharistic minister at St. Bartholomew Catholic Church in Bethesda, Maryland, now gives talks about the value of divine mercy and said that she and her husband chose to forgive Baisley because they knew it is what Jesus would want of them.

“I am no longer so concerned about the appearance of things,” Baisley said. “We need this kind of divine mercy.” She now has a more forgiving attitude that has “opened up a whole new way of living.”

“I am no longer so concerned about the appearance of things,” Baisley told Catholic News Service. “We need this kind of divine mercy.”

Rather than feeling “totally thrown off” when she fails as she did in the past, Baisley said she now has a more forgiving attitude that has “opened up a whole new way of living.”

“I previously wasn’t so conscious of remaining nonjudgmental,” said Baisley, who added that she had been “very critical” of herself before witnessing the kindness of Mr. and Mrs. Pettey, of Potomac, Maryland, who also have a son, Nicholas, and a daughter, Veronika.

Baisley said she now is “more gentle” in her assessment of herself and others, as she tries to adopt some of the parents’ compassion.

“Intellectually, I had an ethical framework to show grace and forgiveness and be nonjudgmental but, in practicality, it was easier said than done,” Baisley said. “It wasn’t just natural for me.”

When Baisley’s attorney mentioned that the parents of the high school student who died in the car that she struck with her Jeep Compass wanted to talk to her within days of the accident, she did not know what to expect.

“I assumed they just wanted to yell at me,” Baisley said. “I figured they had that right.”

Even though the police gave Baisley three traffic tickets and found her responsible for causing the accident, Dominik’s parents became the personification of mercy.

“They said they were thinking of me and would be praying for me at the funeral the next day,” Baisley said. “I was surprised and confused. The major point that related to divine mercy is that it wasn’t just a blip. It was sustained. Their forgiveness seemed so deep for them. I was so confused and disoriented because they were being so nice. Against everything you might have been told to expect, people can totally transcend that muck.”

With the legal parts of her case concluded, Baisley spoke about the night of Nov. 1, 2014, when her vehicle drifted from the road on the Capital Beltway in Maryland and collided with a disabled Honda Accord in which Dominik Pettey sat in the back seat behind the driver as he and a carful of friends from Gonzaga College High School waited for assistance.

Their vehicle had run out of gas and the father of one of his companions was just minutes away from arriving with a can of gasoline when the crash occurred.

“I was certainly tired,” Baisley said as she recalled driving home that night after attending her sister’s 21st birthday party and having “a couple of drinks” while with her family.

“After the accident, I was unconscious for a few minutes due to the air bag,” Baisley said. “I did not feel drunk.”

Nor was she legally intoxicated, based on her blood alcohol content, said Baisley, who declined to share her actual reading to avoid speculation from others about whether her driving may have been impaired by her consumption of alcohol before the accident.

“I definitely was not drunk or wasted behind the wheel,” Baisley said, despite initial media reports that indicated she may have been intoxicated at the time of the crash.

“It doesn’t diminish my responsibility or my role,” Baisley acknowledged. “But If I was legally drunk, I would have been charged with DUI manslaughter.”

“I got distracted by rules,” Baisley said about growing up Catholic, adding that she “totally missed the message of grace and divine mercy.”

The combination of fatigue and consuming alcohol that night showed that driving while “not totally on your game” could have life or death consequences, said Baisley, who added she now has a “zero-tolerance policy” in which she will not drive when she is tired or has been drinking any alcohol.

In addition, Baisley has been able to continue her education at the Uniformed Services University in Bethesda and pursue her dream of helping to counsel members of the military. Mr. and Mrs. Pettey gave Baisley an “incredible gift from an emotional, spiritual and practical level” when they wrote a letter to the prosecutor asking that she not receive a manslaughter charge that would have led to her discharge from the U.S. Army.

“There are moments when I go back to a darker place,” Baisley said. “It is really hard to sustain this positive, forgiving attitude all the time. I can fall back and feel doubt.”

But when she remembers the Petteys’ mercy, it helps her to cope and “keep moving,” Baisley said.

“I think the Petteys are really incredible people who are heavily influenced by their faith,” Baisley said. “I am so grateful that they have shown me what faith can do. I am committed to honoring their son’s memory and propagating their mercy and love over my lifetime.”

A graduate of Jesuit-run Fordham University, Baisley said she appreciates that the mercy shown by the Pettey family led her to become “re-engaged with an organized religious community,” even though outside the Catholic Church.

“Spiritually, I would describe myself as a Christian, not as part of the Catholic Church necessarily,” Baisley said.

Even though she was raised in an Irish Catholic family and was confirmed in the eighth grade, Baisley said she never previously had the experience of “feeling connected and accepted” within the church community. She also said she had stopped going to church after her confirmation and prior to attending a public high school in New Jersey where she graduated.

“We moved to New Jersey just before 9/11, where our family had a front-row view to the smoky New York City skyline, which I think impacted a lot of my future thinking,” Baisley shared.

Baisley, who grew up in New York, California and then New Jersey as the second oldest of her family’s six children, said she felt the Catholic Church was “didactic,” required “memorization” and de-emphasized “spiritual aspects” of the faith.

“I got distracted by rules,” Baisley said, adding that she “totally missed the message of grace and divine mercy.”

PREVIOUS: What would Jesus do on Halloween?

NEXT: Readings of the holy Mass – Thirtieth Sunday in Ordinary Time