Project Rachel helps the healing begin after an abortion 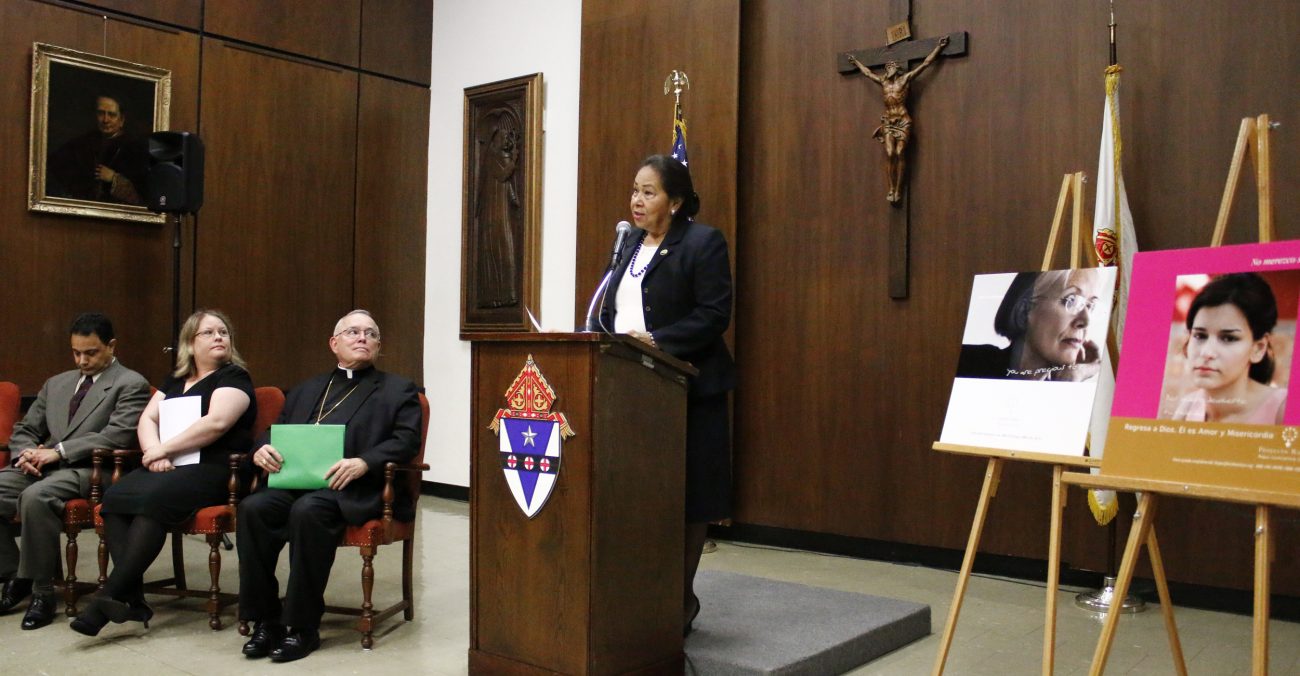 Estela Reyes Bugg, coordinator for Project Rachel, describes the new post-abortion ministry in the Archdiocese of Philadelphia at an Oct. 2 press conference in Philadelphia with Archbishop Charles Chaput, church officials and men and women who have experienced abortion. (Photo by Sarah Webb) 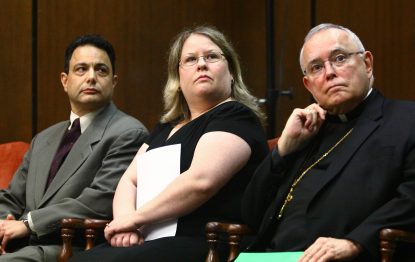 Healing the guilt and regret women and men experience after an abortion is the goal of a new Project Rachel ministry in the Archdiocese of Philadelphia, announced by Archbishop Charles Chaput on Monday, Oct. 3 at the Archdiocesan Pastoral Center in Philadelphia.

Post-abortion ministry has existed for some 30 years in the archdiocese in the form of Rachel’s Vineyard, a national program that invites men and women to a weekend retreat featuring prayer and sharing of experiences.

Project Rachel, as described by the archbishop and archdiocesan officials (watch the full 36-minute press conference here), will offer counseling, prayer and sacramental healing especially to inner-city residents who may not be able to travel to a retreat center far from the city or be able to take time off from work.

“We lose people because they’re not available for a retreat,” said Steven Bozza, director of the archdiocesan Office for Life and Family, who along with archdiocesan Catholic Social Services is collaborating on Project Rachel.

While such Rachel’s Vineyard retreats will still be offered locally, the new ministry focuses on individualized services for women and men who call a toll-free telephone number – 844-772-2435 – or are referred by a parish priest.

Project Rachel coordinator Estela Reyes Bugg can speak in fluent English or Spanish with anyone who is referred to the program.

After a few conversations to assess a persons’ needs, she can offer up to 10 individual counseling sessions over a three-to-six month period with one of eight lay counselors or 20 priests, all trained for just such a ministry. Catholic Social Services pays for the confidential counseling and the program coordinator’s salary.

Prayerful support among caring people is an important part of Project Rachel, Reyes Bugg said, and it creates what Pope Francis has called “a culture of encounter.”

“When people face pain from the past, we are here,” she said, “we are a bridge, presenting a pathway to mercy and love.”

The Catholic Church, Reyes Bugg said, “is here to make post-abortion healing available for women and men. We welcome them with open arms on God’s path to healing and mercy.”

Along with Archbishop Chaput and archdiocesan officials at the Monday press conference were two people whose experiences with abortion underscored the need for the healing ministry.

Denise Kelly was 18 and afraid of getting kicked out of her house if her family knew she was pregnant. She was told abortion was her only option and since removing the blob of “tissue” within her wouldn’t hurt a bit, she went through with it.

But the pain from the abortion was excruciating, compounded by the doctor yelling at her for crying out.

At 25 she became pregnant again. She wanted to keep her baby but the father, a married man, pressured her into an abortion, telling her “you won’t feel a thing.”

But she did feel many things, deeply.

“I became an angry and anti-social person,” said Kelly, now middle aged. “I felt far away from God.” After her mother and brother died, she feared she would never see them in heaven. “I believed I was destined for eternity in hell.”

That was the turning point for Kelly, who was raised Catholic, attended Catholic schools and had even joined her high school’s pro-life group.

Kelly began to pray often and saw that her depression and anger were the result of her abortions. She attended a Bible study group where Rachel’s Vineyard was mentioned, and she saw an ad for it in a church bulletin.

At the Rachel’s Vineyard retreat, “I felt an overwhelming sense of peace,” she said. “The retreat made me feel I was not alone, (and) I could open my soul to God’s forgiveness.”

In a memorial service at the retreat, she named her aborted children. “For the first time in 25 years, I began to feel human again,” Kelly said.

Another collaborator in Project Rachel, along with the archdiocesan agencies, is a local Catholic men’s support group, the King’s Men, which is planning a retreat in November for men who have experienced abortion. 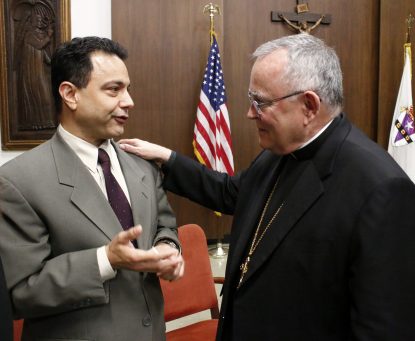 Archbishop Charles Chaput (right) chats with Peter Sciarra, who spoke about his experience with post-abortion healing at a press conference Oct. 3 announcing the launch of Project Rachel in the Archdiocese of Philadelphia.

Peter Sciarra also gave testimony during the press conference about the need for men to heal from abortion.

Thirty years ago as he was dealing with a doctor’s prognosis that he had only two to five years to live, he discovered his girlfriend was pregnant. Though he has since made a full recovery, he felt guilty about their decision to abort their baby.

“As the years went by I became more and more religious. I realized what I had done,” Sciarra said. The realization become more poignant every time he saw a child, and he turned his head away. He would attribute his risk-taking behavior and “hardness of heart” to that abortion.

After discovering Rachel’s Vineyard online, Sciarra went on a retreat and met other men and women who had been led there, he said, to share their experiences.

“I felt God was steering everyone – you could see God bringing healing to them,” Sciarra said.

He came to understand that God had forgiven him, “but I hadn’t forgiven myself.”

Sciarra now speaks of the mercy offered by God to people suffering with years of guilt, calling post-abortion ministry “the path to experience that forgiveness – to forgive yourself as God has forgiven you.”

Archbishop Chaput at the press conference praised the work of the archdiocese’s Office for Life and Family and Catholic Social Services as bringing together what some people view as a divide between pro-life work and social justice efforts. Project Rachel in the archdiocese “is an extraordinary sign of it all coming together,” he said.

He rejected the view that people supporting legal abortion are “the enemy,” and called Project Rachel called a “ministry of accompaniment” through which “we hope our loving concern will be a sign of transformation for our society,” Archbishop Chaput said.

Find more information on Project Rachel and post-abortion healing at the website of the archdiocesan Office for Life and Family, phillycatholiclife.org, or speak with a counselor toll free at 844-772-2435. 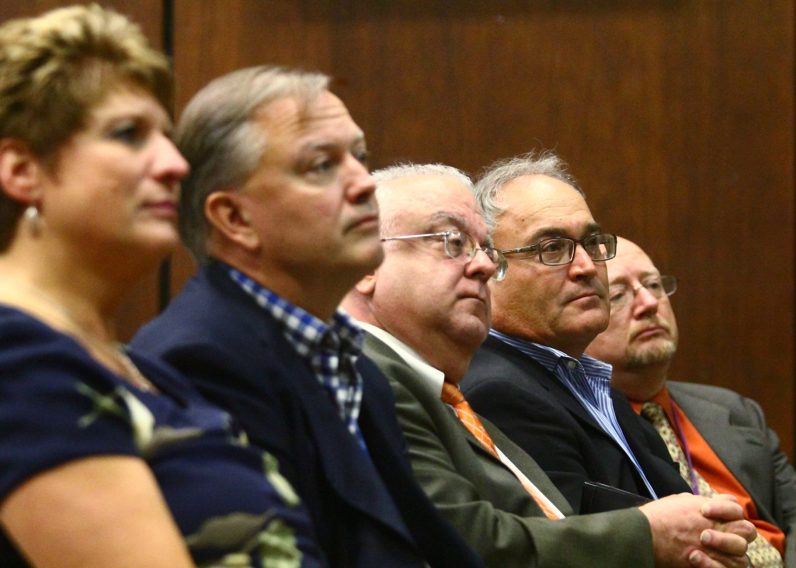 NEXT: Archbishop dedicates new home for seniors in Kensington