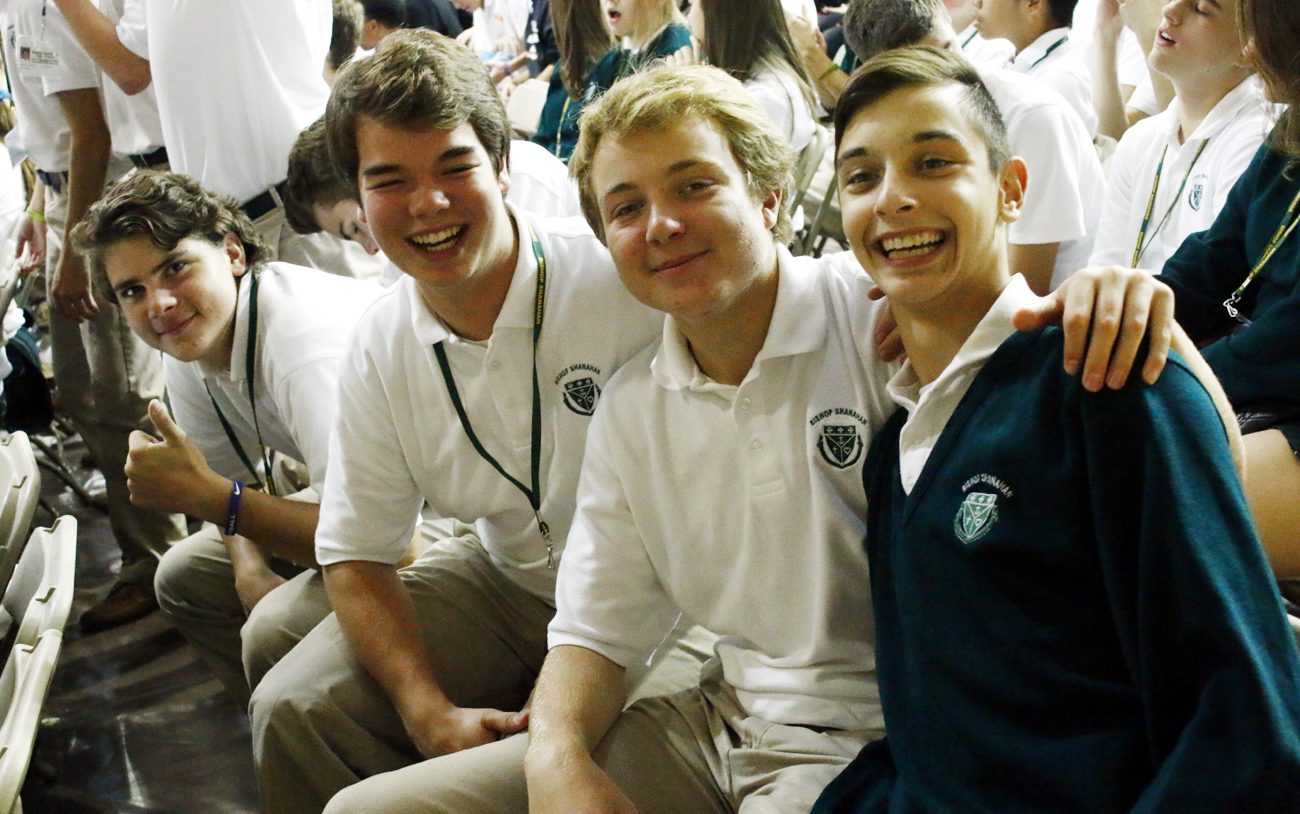 The young men from Bishop Shanahan High School give the retreat a thumbs up. (Sarah Webb) 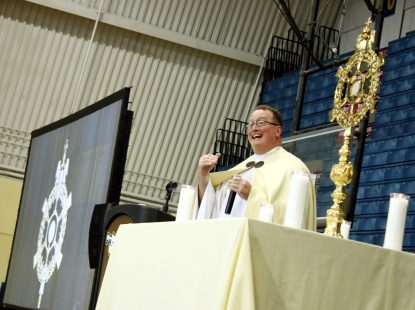 More than 2,200 high school sophomores learned about change and conversion of heart at a rally on Monday, Oct. 17 at La Salle University.

Titled “Metanoia” – a Greek word for transformation or change of heart – the rally was the sophomore class retreat that the archdiocesan high schools typically offer for students of that grade at their individual schools.

The rally for the first time brought together all of the high schools’ sophomores under one roof and adding rock music, dynamic speakers and Eucharistic adoration was a change for both the students and the archdiocesan administrators running it.

(See our photo gallery of the retreat here.)

At times resembling a school dance as teenagers sang and cheered along to classic rock hits with spiritual themes, such as Journey’s “Don’t Stop Believing,” the kids responded with youthful energy to master of ceremonies Colleen Kelly-Rayner and listened carefully to keynote speaker and former fashion model Leah Darrow.

“It was high energy and very Catholic,” said Father Matthew Guckin, the archdiocesan priest who spearheaded the inaugural rally. “It was exactly what we wanted to accomplish.”

He said the rally, modeled on the successful Steubenville youth conferences that many teens attend at Franciscan University each summer, grew from discussions with the high schools’ campus ministers.

They admitted that preparing class retreats took up most of their time but were conversely the least effective use of their time. In response, the Office for Catechetical Formation proposed the concept of a youth rally.

“We want to help students be excited about their faith, and appreciate the faith, because not everyone is Catholic,” said Ann Menna, the archdiocese’s deputy secretary for catechetical formation.

“It’s a pilot program and we’re hoping to go bigger next year,” Menna said. Father Guckin concurred, and said he is looking into the possibility of offering the retreat to next year’s sophomores before the start of Abbey Fest, the wildly popular music and faith festival held September the past four years at Daylesford Abbey in Paoli.

He said the day’s theme that “Metanoia means to turn around,” and that “God loves us, and God allows U-turns,” was understood clearly — and loudly — by the 14 and 15 year olds.

They walked into La Salle’s spacious Tom Gola Arena to the high-energy music of Some Assembly Required, and after bopping in and out of their seats for an hour, they were welcomed by Colleen Hanycz, president of La Salle, which donated use of the arena for the day. 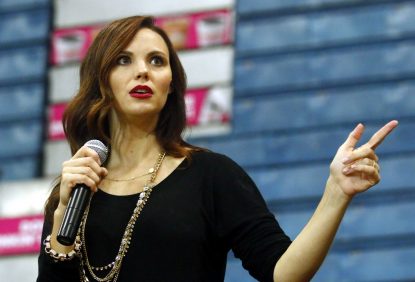 The kids listened politely then got stirred up again with Kelly-Raynor’s rousing rap on faith and good decision making, and a call-and-response of the Metanoia theme: Change of mind, change of heart, change of life.

She then introduced Leah Darrow, a popular Catholic speaker and former fashion model. She recalled her life as a 15 year old in high school who regretted her decision to become sexually active and her experiences in the modeling industry.

The now-married mother of an infant daughter spoke about love, forgiveness, sexuality and preserving one’s dignity in a candid manner that seemed to reach her audience.

Her story concerned finding a definition of true love. “Everything you do will depend on how you define love, and how you live a life of truth,” she said.

Darrow recalled how she cried after having sex with her boyfriend after their high school homecoming dance. She sees now that words such as “It’s your body, it’s your choice” can convince a young person to “cover up how you feel about (sex),” which presents a teenager the dilemma “to choose authentic love or imitation love. Authentic love takes work, and you’re worthy of it.”

Sex that is called casual “is a lie and you know it, it’s not OK,” Darrow said. “Sex is a big deal. It has to do with you and your body because life comes from it.”

Darrow went on to talk about her life in New York City and work as a model in an industry that does not view men and women as people but merely as clothes hangers to be used.

She told of her experience at a fashion photo shoot when she had a vision of her empty hands and a sense of a message saying, “I made you for more.” She walked out of the job, even after the photographer told her, “You’ll be a nobody.”

Oddly, the thought appealed to her. She was ready to be a nobody in the industry and leave it behind.

“I knew I had to change,” Darrow said. “I was a coward, and scared to change my way of life. We want desperately to believe the truth that we were made for more, that what you look like or what you do does not matter.”

Distraught, she called her father in tears. He immediately drove 2,000 miles across the country and when Darrow opened her door, he opened his arms wide and leaped to hug her. He urged her to take him for a good New York deli sandwich, but first to go to confession.

“He was right. I needed to come home. Jesus is home, the Catholic Church is home. I gave all my secrets, I gave everything to Jesus. The one who can fix our broken heart is the one who made it.”

The talk and the events of the day made a great impression on Cecily Ritchie of Archbishop Carroll High School.

“I love these kinds of events (where) we rejoice that this is what we believe in. I love hearing those stories, they’re so inspiring,” she said. “I can relate to what she’s saying, how she found God. It’s an inspiration.”

Ritchie found the rally a strong reinforcement of her Catholic faith.

“You can see the kids’ passion at events like these, like the Steubenville Youth Conference,” she said. “They show why the faith is important. They make you realize it’s OK to practice your faith, to speak out and not be ashamed.”

Ryan Corbett of Lansdale Catholic was most impressed by the wide cultural diversity of the students “interacting with other kids and coming together for this,” he said.

He has participated in other retreats at school, “but this is so much better; you can feel the energy. It’s a good time and we can come to celebrate our faith,” Corbett said.

Father Stephen DeLacy, joined by many archdiocesan priests, led a period of eucharistic adoration followed by benediction to close the day. 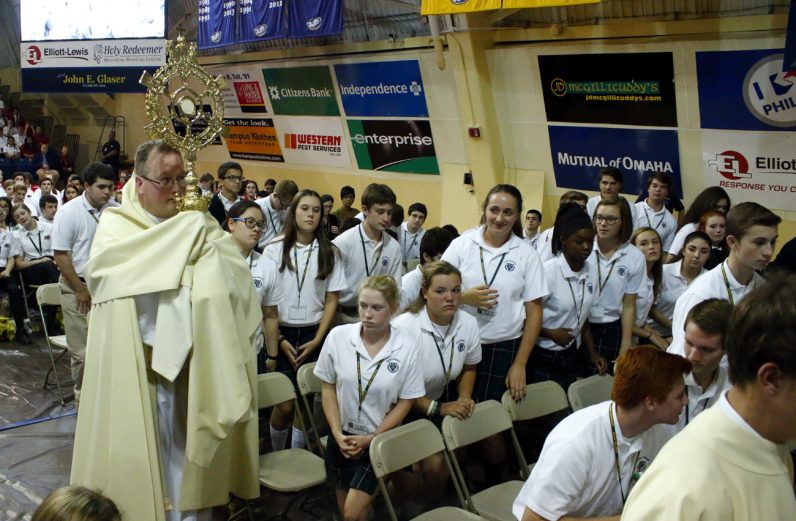 PREVIOUS: Car used by Pope Francis in Philadelphia up for sale

NEXT: Seminary lecture examines Catholic Church in the Middle East