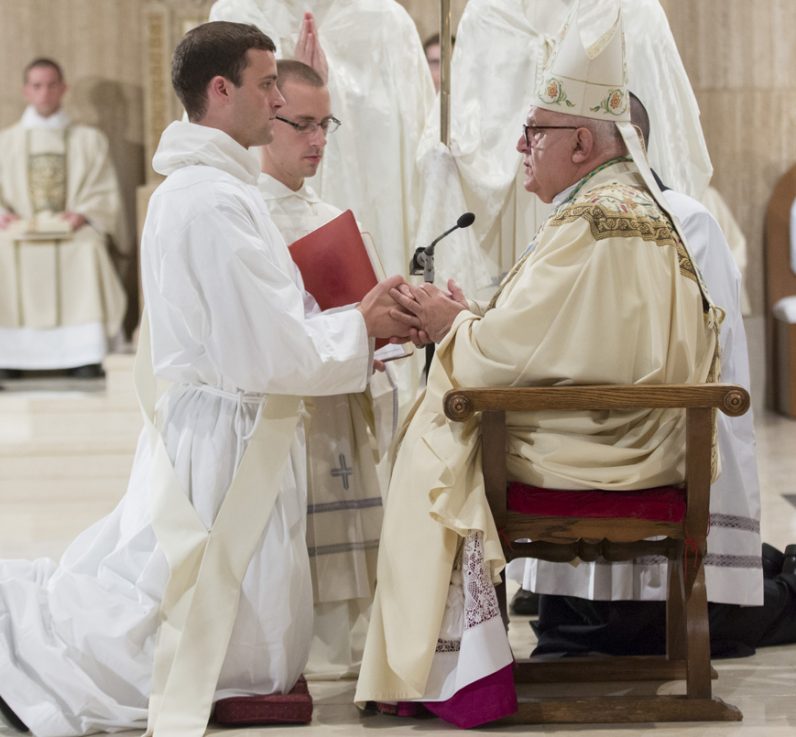 Father Gregory Pine is ordained a Dominican priest by Archbishop Joseph DiNoia May 21 in the Basilica of the National Shrine of the Immaculate Conception in Washington, D.C. (Photo by Father Lawrence Lew, OP)

Newtown, Bucks County native Father Gregory Pine was ordained a Dominican priest by Bishop Joseph DiNoia May 21 at the National Shrine of the Immaculate Conception in Washington, D.C.

The 11 men of the ordination class made it the largest in the Dominican Province of St. Joseph in 45 years.

Father Pine is the son of Barry and Regina Pine of St. Andrew Parish in Newtown, and is a graduate of the Franciscan University of Steubenville.

Father Pine entered the Dominican Order at St. Gertrude Priory in Cincinnati, Ohio in 2010, where he made his first vows in 2011. He was then assigned to the Dominican House of Studies in Washington, D.C. to study for the priesthood. He made his lifelong vows in 2014, and was ordained a deacon in the spring of 2015.

This year Father Pine will continue his studies until the spring of 2017, and await a further assignment afterward.

During his studies in Washington, Father Pine was been engaged in several ministries, including service at Walter Reed National Military Medical Center, Northwest Pregnancy Center and writing for a summer for First Things magazine. For the past two years he has served at the Church of the Assumption Parish in Washington, D.C.

PREVIOUS: Neumann U. director to be only U.S. speaker at Vatican session