A Holy Year for contemplating the face of mercy 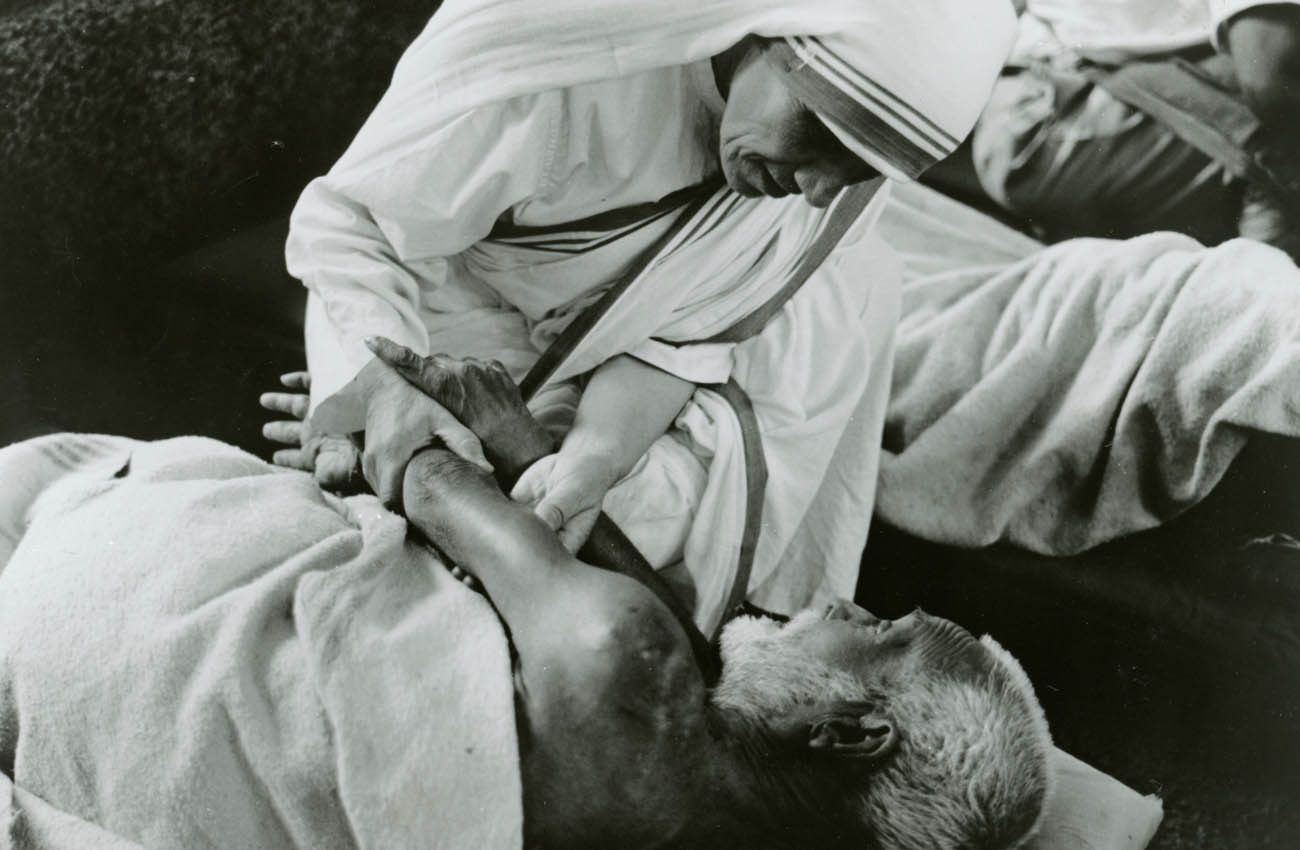 Blessed Teresa of Kolkata cares for a sick man in an undated photo. (CNS photo/KNA)

A picture is worth a thousand words, or so they say. But for revealing what “mercy” truly entails, a picture may be worth many more words than that.

For Pope Francis, mercy is meant to become visible. Because it must be put into action, mercy can be seen or heard or touched or tasted.

The pope drew a little word picture of mercy Sept. 3 when he addressed an international gathering in Rome known as the Jubilee for Workers of Mercy and Volunteers, an important event in the church’s Dec. 8, 2015, to Nov. 20, 2016, Year of Mercy.

He viewed this event, which arrived on the eve of St. Teresa of Kolkata’s canonization, as a good opportunity for a catechesis on mercy.

Someone cries out for help in the picture Pope Francis drew, and someone offers a hand of assistance, hoping to make the “suffering person feel loved.” This is mercy in action.

“Your presence is the hand of Christ held out to all and reaching all,” the pope told the workers of mercy. “You touch the flesh of Christ with your hands.”

The Year of Mercy was entering its final phase when Pope Francis addressed this jubilee event. The entire Holy Year served as an invitation to “contemplate the face of mercy.”

Pope Francis said in “The Face of Mercy” (“Misericordiae Vultus”), his April 2015 proclamation of the Holy Year, that he hoped it would be a period “steeped in mercy so that we can go out to every man and woman, bringing the goodness and tenderness of God.”

He spoke of the “balm of mercy” as “a sign that the kingdom of God is already present in our midst.” He wanted that balm to “reach everyone, both believers and those far away.”

God’s mercy, Pope Francis explained, is “a concrete reality with which he reveals his love as that of a father or a mother moved to the very depths out of love for their child.”

It is hardly an exaggeration “to say that this is a ‘visceral’ love,” he insisted. “It gushes forth from the depths naturally, full of tenderness and compassion, indulgence and mercy.”

Pope Francis emphasized that “everything in (Jesus) speaks of mercy,” and “nothing in him is devoid of compassion.” So “the signs (Jesus) works, especially in favor of sinners, the poor, the marginalized, the sick and the suffering, are all meant to teach mercy.”

Jesus “read the hearts of those he encountered and responded to their deepest need,” said the pope. Moreover, Jesus affirmed that “mercy is not only an action of the Father” but “becomes a criterion for ascertaining who his true children are.”

Pope Francis explored mercy’s implications again and again in the days before and after his encounter with the workers of mercy.

Today “there is great need for men and women who hear the cry of the poor and respond with mercy and generosity,” he said Sept. 17 when he addressed graduates of Jesuit schools and universities participating in a conference on the refugee crisis.

Extend a “warm human welcome” to refugees so that they will not experience the trauma of “sleeping cold on the streets.” Bear in mind, too, that each refugee “has a name, a face and a story,” he urged.

In trying to act mercifully, Pope Francis added, “you are God’s eyes, mouth, hands and heart in this world.”

With the Sept. 4 canonization in Rome of the 20th-century woman known universally as Mother Teresa, the Year of Mercy’s purpose came into full view. The canonization distilled the essence of the Holy Year and communicated it to a global audience.

Pope Francis hoped the new St. Teresa would “help us increasingly to understand that our only criterion for action is gratuitous love, free from every ideology and all obligations, offered freely to everyone without distinction of language, culture, race or religion.”

In every aspect of her life, Mother Teresa “was a generous dispenser of divine mercy,” Pope Francis stressed in his canonization homily.

She was committed to defending the unborn, and “she bowed down before those who were spent, left to die on the side of the road.”

What’s more, he said, “she made her voice heard before the powers of this world, so that they might recognize their guilt for the crime — the crimes! — of poverty they created.”

Pope Francis viewed mercy as “the ‘salt’ that gave flavor” to Mother Teresa’s work. Her “mission to the urban and existential peripheries remains for us today an eloquent witness to God’s closeness to the poorest of the poor,” he commented.

Revisiting the image of mercy in action that he presented a day earlier to the workers for mercy, Pope Francis said that “wherever someone is reaching out, asking for a helping hand in order to get up, this is where our presence … must be.”

NEXT: Making mercy a way of life