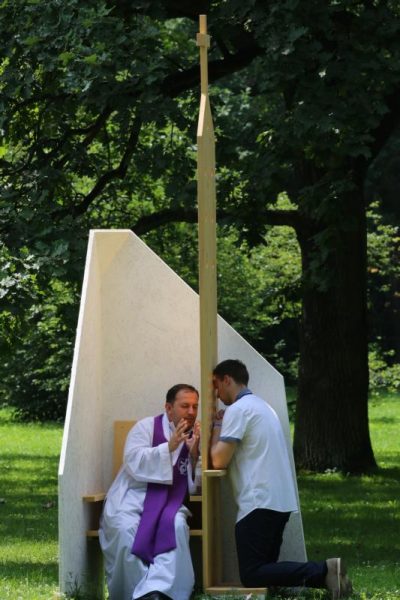 A priest hears confession from a World Youth Day pilgrim at Park Jordana in Krakow, Poland, July 26. When Pope Francis launched his missionaries of mercy on Ash Wednesday, he reminded them, “Let us not forget: Before us is not a sin, but a contrite sinner.” (CNS photo/Bob Roller)

When Pope Francis commissioned his missionaries of mercy on Ash Wednesday, he reminded them, “Let us not forget: Before us is not a sin, but a contrite sinner.”

For Msgr. Joseph R. Reilly, rector/dean of Immaculate Conception Seminary School of Theology at Seton Hall University, the other words that stuck with him were, “I want people to know that this is how much God loves you.”

“There’s power in that message,” he reflects.

Msgr. Reilly is one of 125 American priests among the 1,142 missionaries of mercy worldwide. They either volunteered or were nominated by their bishops; Msgr. Reilly was one of those surprised to find that he’d been nominated.

For the Holy Year of Mercy, the Pontifical Council for Promoting New Evangelization sought priests who were assigned the task of being the embodiment of “the Father’s welcome to all those in search of his forgiveness.” During the past months, the missionaries have been visiting dioceses and hearing confessions.

Msgr. Reilly had heard confessions as a parish priest in the Archdiocese of Newark, New Jersey, but seminary rectors aren’t allowed to hear confessions of seminarians, since it may interfere with their judgment on the fitness of new priests. “When I was younger, I wanted to be a missionary, but I found I didn’t have the disposition for it,” he said.

During the past months, “I’ve learned really that mercy is something that touches every single person. It’s so beautiful that mercy is able to touch the faith of every person.”

Msgr. Reilly found it empowering to be able to tell parishioners, “No one will be written off in God’s plan.”

The missionaries have the authority to forgive four of the sins usually reserved to the Holy See, such as profaning the eucharistic species by keeping them for a sacrilegious purpose, assaulting the pope, the absolution of an accomplice in committing adultery and violating the seal of the confessional.

“Common sins, right?” said Dominican Father Brian Mullady, another of the missionaries of mercy, with a chuckle. Father Mullady is an author and adjunct professor at Holy Apostles College and Seminary in Cromwell, Connecticut. A self-described “itinerant preacher,” he speaks at parish retreats, and had applied to be a missionary of mercy, since he knew it would assist his work.

“I will tell you that some priests were concerned about whether they’d broken the (confessional) seal at some time in their lives, and wanted to be sure, and on occasion, I’d have a priest who would come in and request (absolution) for that.”

“It doesn’t happen often, and I don’t think these people did directly violate the seal, but you know, they do get very scrupulous about it and probably should be because it’s an important thing. And so it helped me to give them some consolation, and tell them, don’t worry about it.”

Both Msgr. Reilly and Father Mullady have felt a special grace with their new work.

“Mercy’s one of the core experiences that we all need,” Msgr. Reilly says. “It’s been really a wonderful gift to me to be able to learn that in a professional way. It’s genuinely a part of who I am now. And I’m very grateful for it.”

“It’s hard for me to explain, but many, many people are happy to meet someone who’s been given this task,” says Father Mullady. “And many people do believe (this) is a big honor. And it’s special to people. It means a lot to people.”

Has it also meant seeing that many Catholics are returning to the sacrament of confession?

Kurt Jensen is a freelance writer.

NEXT: A Holy Year for contemplating the face of mercy